The History of Coffee and How It Transformed Our World – Prices, Fair Trade (1999)

The history of coffee goes at least as far back as the 10th century, with a number of reports and legends surrounding its first use. The native (undomesticated) origin of coffee is thought to have been in Ethiopia. The earliest substantiated evidence of either coffee drinking or knowledge of the coffee tree appears to have been in the middle of the 15th century, in the Sufi monasteries of Yemen. By the 16th century, it had reached the rest of the Middle East, Persia, Turkey, Horn of Africa, and northern Africa. Coffee then spread to the Balkans, Italy and to the rest of Europe, to Indonesia and then to America.

Gabriel de Clieu brought coffee seedlings to Martinique in the Caribbean circa 1720. Those sprouts flourished and 50 years later there were 18,680 coffee trees in Martinique enabling the spread of coffee cultivation to Haiti, Mexico and other islands of the Caribbean. The territory of Santo Domingo (now Hispaniola, comprising Haiti and the Dominican Republic) saw coffee cultivated from 1734, and by 1788 it supplied half the world’s coffee. Coffee had a major influence on the geography of Latin America.[29] The French colonial plantations relied heavily on African slave laborers. However, the dreadful conditions that the slaves worked in on coffee plantations were a factor in the soon-to-follow Haitian Revolution. The coffee industry never fully recovered there.[30]

Members of unions and social justice organizations are voicing their opposition to the fast-tracking of the Trans-Pacific Partnership. They say the new global trade deal will benefit major corporations. Ameera David reports from the protest in Washington, DC.

Billionaires Creating Their own Super PACs… 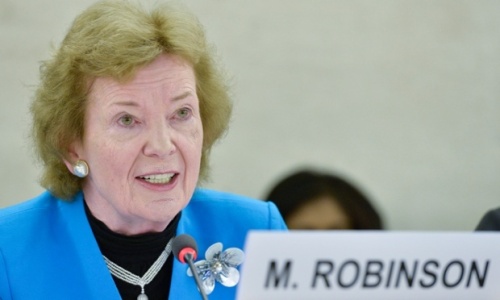 Rich world must support poorest countries to transition from fossil fuels much faster than they have to keep unburnable reserves in the ground, says UN climate change envoy
Mary Robinson: ‘All countries must be enabled to participate in the transition away from fossil fuels together and at the same time …’ Photograph: Jean-Marc Ferré/UN Photo

Tackling climate change will require developing countries to move beyond fossil fuels far more quickly than the rich world has managed, the United Nations envoy on climate change has warned.

Mary Robinson, former president of Ireland and ex-UN human rights chief, said: “It may seem contradictory, but to be fair all countries must be enabled to participate in the transition away from fossil fuels together and at the same time. If not, we will exceed the carbon budget and consign countries without the means to participate in the transition to renewable energy to a future based on expensive, obsolete and polluting fossil fuels.”

The poorest countries, she added, must lead the way in that transition with financial assistance from the rich world. 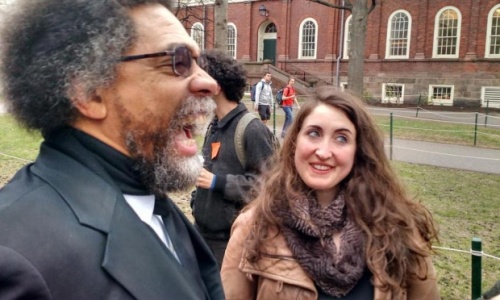 The outspoken civil rights activist and academic Cornel West said Harvard University risked being on the wrong side of a “planetary Selma”, culminating a week-long campaign by students and prominent alumni campaigning for the most prominent university in the US to divest from fossil fuels.

The sit-in protest shut down the campus building that houses the president’s office for the entirety of so-called “heat week”, and forced the closure of another administration building for two days.

Harvard’s administration – despite a reported $79m worth of direct investments in coal, oil and gas companies and likely much more indirectly – has stayed relatively quiet on the growing issue of divestment, but there were signs that the movement had made progress. 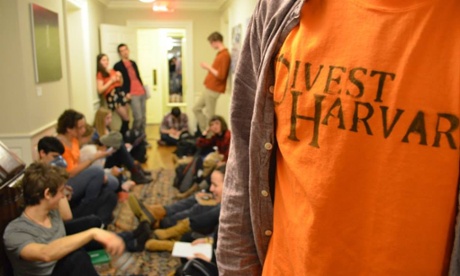 Harvard divestment campaigners gear up for a week of action

Drew Faust, the university’s president, had been “moved” by the protest, said Bill McKibben, a Harvard alumnus and leading environmentalist who has worked closely with fossil fuel divestment initiatives across US college campuses and with the Guardian’s “Keep it in the Ground” campaign.

Faust, who has rejected divestment as “neither warranted or wise”, even reached out to a leader of the student protest movement for a one-on-one meeting.

The student, McKibben said, told the president she wanted a public meeting instead.

“It’s climate justice, more than anything,” McKibben said in an inteview with the Guardian. “And no one has stood on the side of reason and justice more than Cornel West.”

On Changing History: Divest Harvard and the Power of Confrontatiom 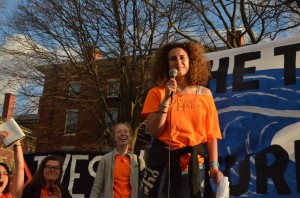 “I think they’re militant, and I don’t think we should be putting our name on a thing that sued the University.”

Such were the words of Daniel Banks ’17, the Undergraduate Council’s Student Initiatives Chair, regarding Divest Harvard. The night was April 12, and the activist group had just introduced an unambitious piece of legislation before the UC that would have allowed Divest to advertise the group’s so-called Heat Week over the governing body’s e-mail list.

The motion failed, 0-27, which I suppose is unsurprising. After all, the UC list would be pretty annoying if everyone could promote their cause du jour on it. But Banks’ statement, and the underlying tone of the meeting for that matter, was telling in that many people in the UC, and in the student body writ large, do think Divest is “militant,” or at least unacceptably coercive and disruptive.

The Crimson’s editorial board, which I nominally sit on, has condemned the movement six times (read it here, here, here, here, here, and here), and criticized its tactics twice, calling the group “radical” and “not open to debate.” Writing for TIME, Aaron Miller ’18 called down the Divesters for “their proclivity for noise and attention.” Ask many other centrist students on campus about the group, and they’ll say that the move away from dialogue and toward action—blockades, lawsuits, et cetera—has been counterproductive and petty. 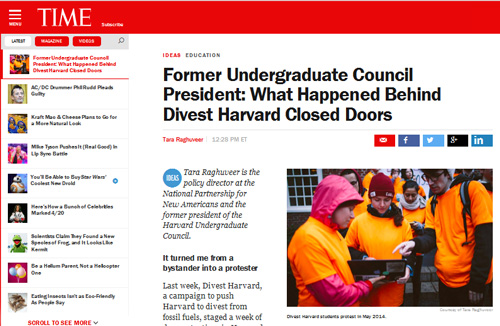 Tara Raghuveer is the policy director at the National Partnership for New Americans and the former president of the Harvard Undergraduate Council.

It turned me from a bystander into a protester.

Last week, Divest Harvard, a campaign to push Harvard to divest from fossil fuels, staged a week of demonstrations in Harvard Yard. On Thursday, University President Drew Faust offered the student protesters a meeting if they ended their blockade. They declined, and I support that decision. I was one of the students who blocked the entrance to Faust’s office with Divest Harvard last year.

In November 2012, when Harvard students voted in the Undergraduate Council presidential election, I was on the ballot, running for president. For the first time in six years, undergraduates also had the chance to vote on referendum questions. There were three: one on establishing a social choice option in Harvard’s endowment, another on revising sexual-assault policies, and a third on divesting the university’s then $30.7 billion endowment from fossil fuels.

On Nov. 17, the council announced the results: I had been elected president, and students had approved all three questions. Harvard became the first school in the nation to pass a student referendum in support of divestment. Since the majority of voting students, 72% of the 3,556 voters, had passed the divest referendum, the council was obligated to support it in whatever capacity we could. Accordingly, I became Divest Harvard’s de facto liaison to the administration.

In the beginning, I didn’t feel any real ties to the movement. I was an interested but neutral bystander. I was impressed and, to be frank, intimidated by the conviction I observed in my peers who led Divest. As the rest of us bumbled through seminars and lectures and lunch meetings in desperate search of our passions, they possessed laser focus.

Over the next year and a half, I spoke at rallies and moderated a town hall featuring Harvard professors, some who supported and others who decried divestment. I facilitated meetings between Divest leaders and members of Harvard’s administration, including members of the Corporation Committee on Shareholder Responsibility and President Faust herself. Those meetings turned me from a bystander into a protester. You should know what happened behind those closed doors.

The first meeting, in February 2013, felt productive. But as the meetings continued, my skepticism about their utility grew. We kept hearing the same responses from university representatives: “This is a really thorny issue.” “Don’t discount the contributions Harvard makes through research.” “We can’t predict the future.” “The endowment shouldn’t be used as a political tool.” One of the CCSR representatives bemoaned the “myopic American public,” arguing that fossil fuels are too entrenched in our society for Harvard’s divestment to matter. Another suggested, “Driving a car has the same moral culpability as owning a fossil fuel company.” They reiterated that they believed climate change to be one of the world’s most consequential challenges, but that the university would not consider divesting. They promised instead to pursue engagement with fossil fuel companies through shareholder activism. 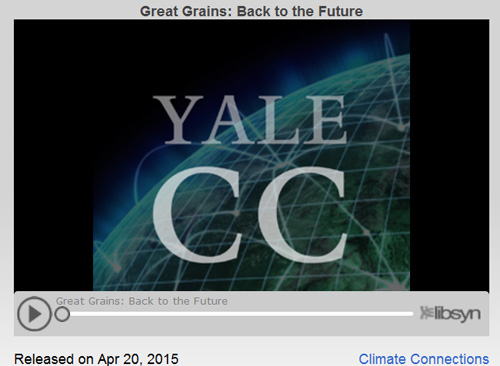 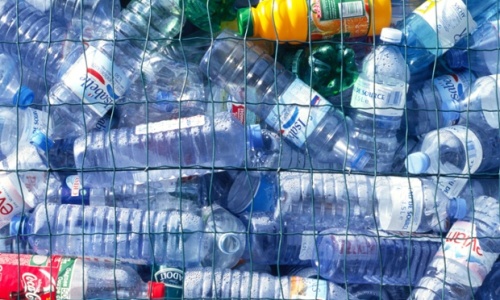 Californians facing the prospect of endless drought, mandated cuts in water use and the browning of their summer lawns are mounting a revolt against the bottled water industry, following revelations that Nestlé and other big companies are taking advantage of poor government oversight to deplete mountain streams and watersheds at vast profit.

An online petition urging an immediate end to Nestle’s water bottling operations in the state has gathered more than 150,000 signatures, in the wake of an investigation by the San Bernardino Desert Sun that showed the company is taking water from some of California’s driest areas on permits that expired as long as 27 years ago.

Last month a protest at a Nestlé Waters North America bottling plant in Sacramento, the state capital, forced a one-day closure as protesters brandishing symbolic plastic torches and pitchforks blocked the entrances. The revelations have agencies from the California State Water Resources Control Board to the US Forest Service scrambling to justify a regulatory framework that is poorly policed and imposes almost no requirements on the big water companies to declare how much water they are taking.

Nestlé itself insists its water use is efficient and has minimal impact on the environment – something the activists reject out of hand. 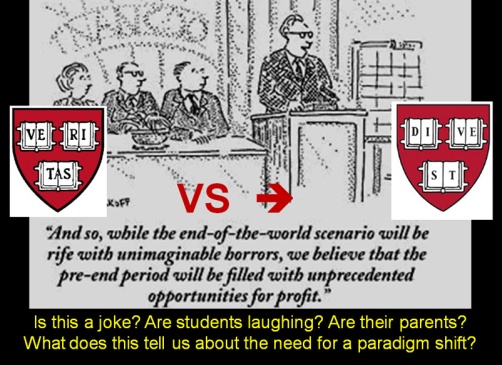 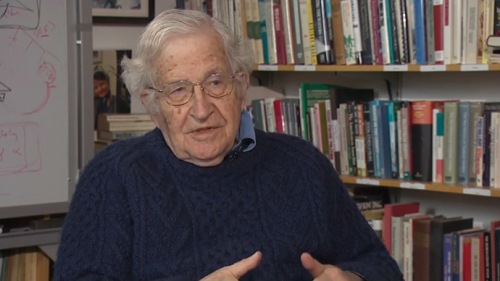 Major American media organizations diligently parrot what US officials want the public to know about global affairs, historian Noam Chomsky told RT. To US leaders, any news outlet that “does not repeat the US propaganda system is intolerable,” he said.

The culpability of the West – namely the United States – for world affairs, such as the Ukrainian conflict or tensions with Iran, is another idea that is not permissible in leading American media, Chomsky said, adding that world opinion does not matter when that opinion counters US strategy.

He added that, “any reader of [George] Orwell would be perfectly familiar with this. But it continues virtually without comment.”

The social philosopher and MIT professor said, “if there were any imaginable possibility of honesty,” Rep. Royce could be talking about the American media. He pointed to a recent New York Times story that discussed reasons not to trust Iran amid the tentative agreement between Tehran and Washington, along with other major global powers, over the former’s nuclear ambitions.

“The most interesting one is the charge that Iran is destabilizing the Middle East because it’s supporting militias which have killed American soldiers in Iraq,” Chomsky told RT’s Alexey Yaroshevsky.