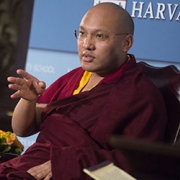 Besides epidemics, wars, violence, and starvation, there is another source of disaster that is often overlooked: “a lack of love.” So said His Holiness the 17th Gyalwang Karmapa, Ogyen Trinley Dorje, to a capacity crowd at Harvard’s Memorial Church on Thursday, March 26.

“A lack of love can cause people to have no help when they need help, no friends when they need a friend,” he continued. “So, in a sense, the most dangerous thing in the world is apathy. We think of weapons, violence, warfare, disease as terrible dangers and indeed they are, but we can take measures to avoid them. But once our apathy takes hold of us, we can no longer avoid it.”

His Holiness the 17th Gyalwang Karmapa visits Harvard University as part of his American Tour 2015. At the request of the Harvard Divinity School, the Karmapa gave a short talk, “Caring for Life on Earth in the Twenty-first Century”. English translation by Lama Yeshe Gyamtso.