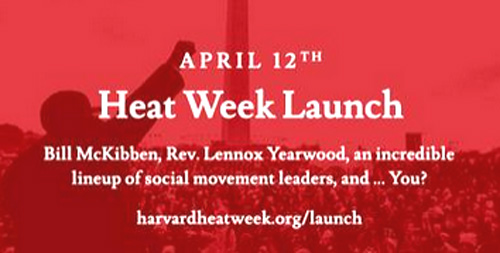 As part of the growing Fossil Fuel Divestment Movement, join us in Cambridge to kick off Harvard Heat Week. Join students, faculty, alumni, social movement leaders, and community members to kickoff a week of action at Harvard, calling on the school to divest their holdings in fossil fuel companies as a step towards addressing the climate crisis.

Join us during Harvard Heat Week – where students, faculty, alumni, and members of the community will come together on campus to speak out for climate justice, learn from one another, and take principled action. The climate crisis leaves no room for neutrality — tell Harvard to stand on the right side of history by divesting from Fossil Fuels. There will be events all week ranging from sit-ins to rallies – learn more and join us at www.HarvardHeatWeek.org

By Mariel A. Klein , CRIMSON STAFF WRITER9 minutes ago

The “Harvard Heat Week” protest, which organizers originally promoted as a sit-in, aims to bring students, faculty, and alumni to Harvard Yard to demand that the University divest its $35.9 billion endowment from fossil fuels. Divest member Ben D. Sorscher ’18 said the protest would not disrupt the 14 freshmen who live in Mass. Hall and that Divest members had individually notified each freshman of the plans and scheduled one-on-one meetings with them.

Protesters intend to form a circle around Mass. Hall and camp out at night, according to Divest Harvard co-founder Chloe S. Maxmin ’15. She added that “hundreds” of advocates of the movement, including dozens of students, are willing to be arrested. The activists have said that they will need 50 to 100 participants in the sit-in each day.

“The time for dialogue has passed. The time for action is now,” Maxmin said to a crowd of 30 people gathered for a Divest teach-in on Monday afternoon.

Sorscher said that at the end of the protest, the activists hope for “a change in stance of the administration from the outright opposing [of divestment] they have right now.”

The Black Students Association and Divest Harvard are jointly hosting an evening of snacks, drinks and conversation about the impact of climate change on black communities. Join us! We will hear from Kalila Barnett, Excutive Director of the Roxbury-based environmental justice organization Alternatives for Community and Environment. Come with questions and a friend!

What is Divest Harvard?
Why do they block Mass Hall and/or sit inside it?
What is Harvard Heat Week?

Join us from 5-6 pm on Monday April 6th in Ticknor Lounge
for a good old-fashioned teach-in!

Members of Divest Harvard will speak briefly about the campaign,
then we’ll all have a discussion about questions and misconceptions.

(If you don’t have Facebook, this link is for you.)

Harvard to host week of events, discussions on ways to tackle problem

In a speech on climate change delivered during her visit to China last month, Harvard President Drew Faust described the problem as “a struggle, not with nature, but with ourselves.”

During Climate Week April 6-10, Harvard will take a long look at the ongoing struggle to find man-made solutions to this man-made problem. Spearheaded by the Harvard University Center for the Environment (HUCE), next week’s events will feature everything from informal breakfasts with climate scientists to more traditional lectures by prominent experts to social and literary gatherings inspired by the Earth’s biggest environmental conundrum.

HUCE Director Daniel Schrag, the Sturgis Hooper Professor of Geology and professor of environmental science and engineering, said the week presents an opportunity for members of the Harvard community to engage on the issue, discuss, and learn.

As they say in late-night TV ads:
“But wait! There’s more…!
There is, perhaps, something more at stake in the next few weeks.  As Harvard President Drew Faust described the problem as “a struggle, not with nature, but with ourselves.”  This is absolutely correct.

The Struggle to
“Tackle” Climate Action at Harvard

For there is none of you so mean and base
That hath not noble luster in your eyes.
I see you stand like greyhounds in the slips,
Straining upon the start. The game’s afoot.
Follow your spirit, and upon this charge
Cry “God for Harry, England, and Saint George!”
Henry V, 3, 1

A significant debate may now be enjoined.   There are so many important questions before the human community concerning climate change,  but locally one key question is this:

Who will control the discussion
of climate issues at Harvard?

Why has the President been reluctant to “talk” with concerned students or faculty in the past?   Who is encouraged, privileged, and authorized to speak in this newly found interest to “talk?”  Where are the “Arts” in the Faculty of Arts and Sciences?  Where is the Divinity School?  The School of Public Health?  Where are the historians and archaeologists who could tell us of  climate history and the collapse of past civilizations from climate catastrophes?   Will they be encouraged, privileged, authorized or even allowed to “talk” in these proceedings?  If so, will their voices be heard over the managerial, financial and policy rhetoric of official Harvard?

Some of Harvard’s Alumni have characterized our circumstance most succinctly concerning the current administration: 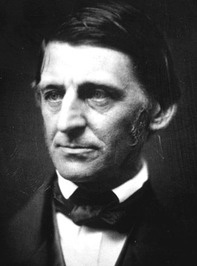 “What you do speaks so loudly that I cannot hear what you say.”

Well beyond the Harvard campus, other distinguished alumni have spoken of the common plight of the human community:

In the current struggle over who can “talk”  at Harvard, to Harvard and for Harvard on climate issues, perhaps Harvard itself should pay attention to the larger dimensions of the problem at hand that their most eloquent alumni have voiced to the world.

Besides epidemics, wars, violence, and starvation, there is another source of disaster that is often overlooked: “a lack of love.” So said His Holiness the 17th Gyalwang Karmapa, Ogyen Trinley Dorje, to a capacity crowd at Harvard’s Memorial Church on Thursday, March 26.

“A lack of love can cause people to have no help when they need help, no friends when they need a friend,” he continued. “So, in a sense, the most dangerous thing in the world is apathy. We think of weapons, violence, warfare, disease as terrible dangers and indeed they are, but we can take measures to avoid them. But once our apathy takes hold of us, we can no longer avoid it.”

His Holiness the 17th Gyalwang Karmapa visits Harvard University as part of his American Tour 2015. At the request of the Harvard Divinity School, the Karmapa gave a short talk, “Caring for Life on Earth in the Twenty-first Century”. English translation by Lama Yeshe Gyamtso.

A well-drilling rig at an almond orchard in Hanford, Calif. Land devoted to water-thirsty almonds has doubled in the state in 20 years. Credit Max Whittaker for The New York Times

By JUSTIN GILLIS and MATT RICHTELAPRIL 5, 2015

Even as the worst drought in decades ravages California, and its cities face mandatory cuts in water use, millions of pounds of thirsty crops like oranges, tomatoes and almonds continue to stream out of the state and onto the nation’s grocery shelves.

But the way that California farmers have pulled off that feat is a case study in the unwise use of natural resources, many experts say. Farmers are drilling wells at a feverish pace and pumping billions of gallons of water from the ground, depleting a resource that was critically endangered even before the drought, now in its fourth year, began.

California has pushed harder than any other state to adapt to a changing climate, but scientists warn that improving its management of precious groundwater supplies will shape whether it can continue to supply more than half the nation’s fruits and vegetables on a hotter planet.