The Name of the Game: Monopoly…

Thom Hartmann says so-called conservatives are only interested in creating monopolies to protect their own interests.

Thank you being part of Global Divestment Day.

From the Pacific Islands to South Africa, from the United States to Germany, we stood up together to demand that our governments, universities and financial and religious institutions stop investing in the rogue industries that are destroying our planet.

It was a massive turning point in the divestment movement with people across six continents joining forces to end the age of fossil fuels.

Thom Hartmann says the Koch Brothers and other so-called fiscal conservatives are using Republican social issues to get voters to help further their economic interests.

U.S. District Judge Nannette Jolivette Brown has dismissed the largest environmental lawsuit in U.S. history, effectively allowing the fossil fuel industry to get away with poisoning and destroying the wetlands of Louisiana. But what most of the media has missed is that Judge Brown spent decades working as an attorney for the industry 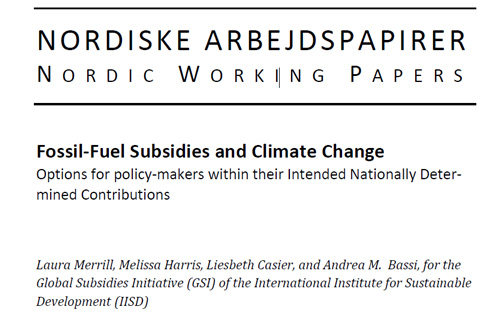 In 2014 almost 30 countries, including Egypt, Indonesia and India, delivered some form of fossil-fuel subsidy reform (FFSR). Current low oil prices make the removal of consumer fossil-fuel subsidies to the public easier because, depending on the level of subsidies, pass-through costs to the consumer are lowered. As a result, many countries that maintain subsidies to oil, gas, diesel, coal and electricity generated from such fuels will be considering or undergoing reform in the near future. Removal of fossil-fuel subsidies leads to domestic national emissions reductions in greenhouse gases (GHGs). Parties can use the opportunity, around current and planned reforms, and include such plans and expected emissions reduction estimates within their Intended Nationally Determined Contributions (INDCs).

Different analyses find that by removing subsidies to fossil fuels (consumer subsidies stood at $543 billion in 2013 [International Energy Agency, 2014a]) we would see a decrease in global GHG emissions of between 6 and 13 per cent by 2050. Yet, such models are likely to be an underestimate as they are based on consumer subsidies only (they do not include the removal of producer subsidies) and only represent the effect of reductions in demand based on a price increase. In fact, on the policy side, a cap on emissions in Organisation for Economic Cooperation and Development (OECD) countries, coupled with multilateral action on reform, would increase the percentage reduction in emissions achieved from phasing out fossil-fuel subsidies. There are opportunities on the budgetary side as well, as removing fossil fuel subsidies also frees up significant and precious government resources. Finance that has then been invested by governments into social safety nets could also be reinvested into energy efficiency and sustainable energy for all, leading to low-carbon energy pathways. Crucially, in order for countries to gain the greatest emissions reductions from reform and to change a relatively unchanged global energy mix, governments must simultaneously invest in energy and transport infrastructure to enable switching towards a more diverse energy mix with lower-carbon options. Finally, the secondary effects from the removal of fossil- fuel subsidies on GHG emission reductions are likely to also be important and could potentially help lift the lid on growth in low-carbon energy systems. These are also often not recognized in current reduction estimates. One piece of research finds that the presence of fossil-fuel subsidies drove 36 per cent of global carbon emissions between 1980 and 2010 (Stefanski, 2014).

This paper looks at research concerning the removal of fossil fuel subsidies and the implications for GHG emissions. It then outlines a process for countries to include FFSR and emission reductions in their INDCs and proposes actions for policy-makers to support a United Nations Framework Convention on Climate Change (UNFCCC) agreement in 2015 (see Table ES1).

Current fossil-fuel subsidies lock us into a high-carbon energy world. Removing subsidies to fossil fuels is one of the keys to unlocking our dependency on carbon and represents an opportunity to open the door on a low-carbon future.

http://democracynow.org – As a federal inquiry begins in the killing of three Muslim students in North Carolina and an Islamic center in Houston, Texas, was intentionally set on fire Friday, we look at a new report that exposes the people who fund and stoke anti-Muslim sentiment in the United States. The investigation by the Center for American Progress is called “Fear, Inc. 2.0, The Islamophobia Network’s Efforts to Manufacture Hate in America,” an update of a 2011 report. We are joined by the report’s co-author, Yasmine Taeb, Islamophobia project manager at the Center for American Progress.

Fast Track to an Empty Basket

Trade treaties are a mystery, and there is a good reason for that

They are negotiated in secret.

and the other – with almost all of Asia and a good part of South America, called the Trans-Pacific Partnership or TPP.

There are many reasons to say no to these trade treaties.

Take Local Food.
.
Trade negotiators call programs like Farm to School and Buy America “localization barriers” because they give preference to local producers and economies rather than multinational corporations with their global supply chains.

Or how about food safety?

Under TTIP and TPP food safety regulations are subject to challenge by corporations. Legislation in such areas as GMO labeling, hormone additives in animal feed and the banning of chemical rinses
used in animal processing will be jeopardized.

Millions of people will also be denied access to healthy local foods while farm workers will endure
increased exposure to toxic chemicals.

Simply put, free trade treaties are a bad deal for citizens. President Obama would like Congress to give up its authority to review and amend trade treaties through a thing called Fast Track. Under this,
Congress can only vote up or down and make no amendments to the treaty text.

New England has been hit with its fourth major snowstorm in less than a month. Two feet of snow fell in some areas, adding to up to six feet already on the ground. February has already become Boston’s snowiest month since records began in 1872, with reports the city has now recorded more snow in three weeks than Chicago has ever seen in an entire winter. Climate scientist Michael Mann noted the link between record snowfall and climate change, tweeting: “If you deny that warmer ocean temps lead to greater snowfall with coastal winter storms, you are not a climate denier. You are a physics denier.”