Today, Divest Harvard and its allies have begun a sit-in in Massachusetts Hall to demand Harvard fully divest its endowment from fossil fuels. We are sitting in, as Harvard students have for living wages and divestment from apartheid, to bring the urgent problem of climate injustice to our President’s doorstep.

Our President has called us coercive and told us we are using the wrong means for combating climate change. We are saddened by her characterization of our action when we are continuing a legacy of civil disobedience that has brought real change to our university. We believe it is necessary for Harvard to use every means in its power to combat climate change. We disrupt business as usual because business as usual permits massive injustice via the extraction and consumption of fossil fuels, which disparately threaten the livelihoods of global citizens.

Last semester, President Faust inspired us when she quoted civil rights leader John Lewis on civil disobedience: “I got into trouble. Good trouble. Necessary trouble.” She went on to praise those in “Harvard’s own imperfect past who were willing to get into necessary trouble” because they have pushed our university forward through history.

We hope to do the same. 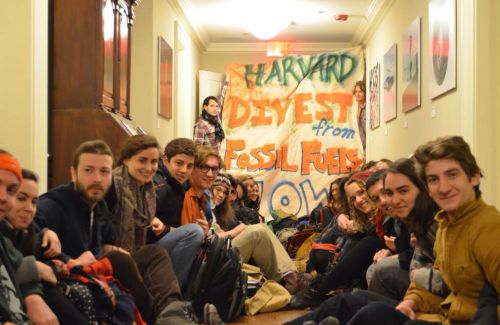 Today, more than thirty-five Harvard students launched a sit-in at Massachusetts Hall, outside President Drew Faust’s office, to demand full divestment from the fossil fuel industry. We sit in because Harvard has a responsibility to do everything in its power to address the climate crisis.

The scientific debate about climate change is over. Global warming threatens livelihoods and cultures in communities around the world with natural disasters, drought, floods, disease, and conflict. Yet Harvard knowingly and willingly profits from the fossil fuel companies that exacerbate this crisis, even as the true costs of oil, coal, and gas use are borne by our communities. Overwhelmingly, these costs are shouldered by already marginalized communities, making this not only a climate issue, but a justice issue.

As we sit in, we call on Harvard to answer these questions. Will Harvard continue to profit from corporations whose extraction methods exacerbate inequality in already marginalized communities? Will this university disregard the effect of exploitative business practices and choose to prioritize corporate profit over communities on the frontlines of climate disasters whose lives and cultures are under siege? Will it choose to ignore commitments to current and future generations, including Harvard’s own students, who are currently being robbed of a livable future?

Variations in seasonality of solar radiation reaching the Earth’s surface arising from changes in the Earth’s eccentricity, axial tilt (obliquity), and precession have contributed significantly to the pacing of the Earth’s glacial-interglacial cycles over the last million years.

Obliquity:
The axis of the Earth is tilted with respect to the plane of its orbit around the Sun.
The inclination of the Earth’s axis is subject to variations between 22.1 and 24.5 degrees with a period of 41,000 years. With an increasing tilt, the difference between summer and winter insolation increases leading to stronger seasonal cycles. When obliquity is small the incoming solar radiation is more evenly distributed between the seasons.

Eccentricity:
The Earth’s orbit around the sun changes on periods of about 100,000 and 400,000 years from nearly circular to slightly elliptical. This cycle is driven by other planets in the solar system. The eccentricity is a measure for the departure from a circular orbit. Currently, the eccentricity is small and the Earth’s orbit is only slightly elliptical. Thus, the difference in incoming solar irradiation between the closest approach to the Sun and the furthest distance amounts only to 6.8%. However, the eccentricity modulates the amplitude of the precessional cycle of the Earth and thus the amplitude of the seasonality. (The amplitude of eccentricity in the animation is heavily exaggerated for illustration purposes)

Precession:
Precession describes a gyroscopic motion of the Earth’s axis generated by the Sun and the Moon. The orientation of the Earth’s axis with respect to the fixed stars changes with a period of ~23,000 years. Currently, summers in the Southern Hemisphere occur when the Southern Hemisphere is closer to the Sun. Thus, the Southern Hemisphere experiences a greater difference between summer and winter insolation while the Northern Hemisphere experiences milder seasons. This will be reversed in about 11,000 years from now. The effect of precession is modulated by eccentricity as can be seen by the fact that in a perfectly circular orbit (zero eccentricity) there would be no effect of precession on the distribution of incoming solar radiation over the seasons and the two hemispheres. 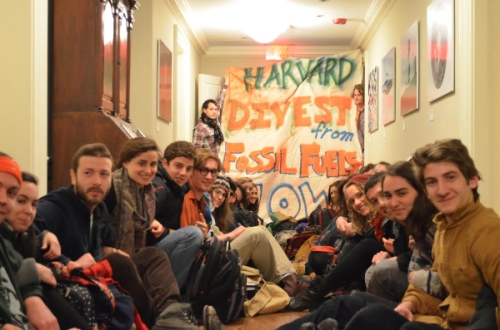 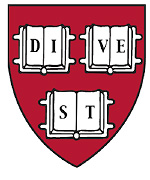 This morning, 34 Harvard students and Divest Harvard members began a sit in outside President Faust’s office in Massachusetts Hall. We call on Harvard University to divest from fossil fuels and stand up for its students’ futures.

Global warming natural cycle: understanding the difference between the main climate drivers of the natural Milankovitch Cycles and how that influences natural variation in ice, oceans, vegetation and seasons, helps us understand how the earth moves in and out of ice ages. From this context we can more easily understand the forces involved in our current global warming. Written & narrated by John P. Reisman. Science review by: Mike (Michael) Mann, Jeff Severinghaus, and James Maslanik, with special thanks to Ralph Keeling, David Archer, and Bette L. Otto-Bliesner. 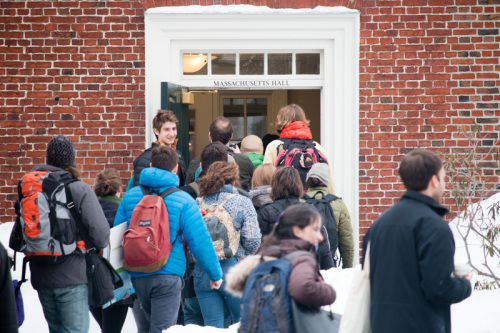 CAMBRIDGE, MA — On Thursday morning, over 40 supporters of the Divest Harvard campaign entered Harvard’s Massachusetts Hall and refused to leave.

The students are occupying the building, which houses the offices of President Drew Faust and other members of the Harvard Administration, in order to ask that Harvard divest its $36.5 billion endowment from the top 200 publicly traded fossil fuel companies.

“By investing in the fossil fuel industry, Harvard undermines its intellectual and moral integrity,” said Harvard undergraduate and sit-in participant Canyon Woodward ‘15. “It is a sad irony that Harvard funds its researchers by ignoring the implications of their findings.”

The sit-in action is also taking place in support of Global Divestment Day, which will occur on Feb. 13 and 14. [For more background to Harvard student occupation see:]

“By investing in fossil fuel companies, Harvard jeopardizes the future of its students and the world,” added Sima Atri, a third-year student at Harvard Law School. “Our action today is not just about climate change, but about larger issues of injustice. We refuse to stay silent as Harvard profits from business practices that are causing disproportionate harms on already marginalized communities.”

The Divest Harvard campaign, now two years active, is part of a growing movement. On more than 500 campuses across the United States, students and faculty have organized to demand that their endowments divest from fossil fuels. At Harvard, too, the movement grows. In the Harvard Undergraduate Council elections of November, 2012, 2,561 Harvard undergraduates voted in favor of a referendum expressing support for divestment; of the 55 percent of undergraduates who voted on the referendum, 72 percent voted yes. As of November, 2014, 1,031 Harvard alumni and 213 Harvard faculty have signed petitions asking the University to divest its endowment from the fossil fuel industry.

Despite student, faculty, and alumni opinion, the Harvard Administration has repeatedly refused requests for open debate on divestment, holding meetings with trustees behind closed doors and making public statements that

dismiss student concerns about the dangerous political influence of fossil fuel corporations. On May 1, 2014, supporters of the Divest Harvard campaign organized a blockade of Massachusetts Hall in an attempt to win an open meeting with Harvard trustees to discuss fossil fuel divestment. The trustees declined to meet, and the Harvard University Police Department dispersed the blockade. Harvard undergraduate Brett Roche, ‘15, was arrested.

“It’s immoral for Harvard not to do everything in its power to address climate change,” said Rory Stewart, a Harvard graduate student and sit-in participant. “By not divesting, it’s showing that the interest in the University endowment is strictly for financial gain and not for its own future, the future of its students, and the future of our planet.”

Harvard currently holds $79.5 million in the top 200 publicly traded fossil fuel companies. Supporters of the Divest Harvard Campaign, both inside and outside of Massachusetts Hall, ask that Harvard reduce those holdings to zero.

“We will be disruptive. We will disrupt university operations just as the act of not divesting is disrupting our future,” said Annie Schugart, a Harvard undergraduate student and sit-in participant. “We feel obligated to be disruptive for as long as it takes to achieve divestment, for the sake of our future.”

The fossil fuel industry is both fueling the climate crisis and blocking serious action. On Global Divestment Day, we will call on our institutions — our schools, our governments, our banks and our places of worship — to divest from destruction. Each act of divestment takes back power from fossil fuel companies and helps create a mandate for our leaders to take real action. 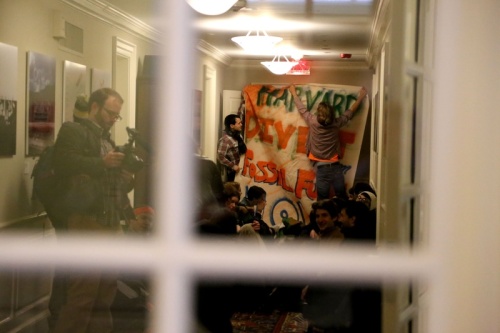 Madeline R. Lear
Canyon S. Woodward ’15 of Divest Harvard hangs a banner during a protest in Massachusetts Hall. A group of students rushed into the building that houses the University president’s office this morning.

Protesters Canyon S. Woodward ’15 and Talia K. Rothstein ’17, both members of the activist group Divest Harvard, said Thursday morning that Faust had agreed to meet with the group at 2 p.m.

To stage their protest, the group of students walked through three sets of doors to enter the hallway outside of the offices of Faust, Provost Alan M. Garber ’76, and other officials Thursday. After entering, the protesters put up a banner advocating for divestment in the hallway. By 10:10 a.m., Harvard University Police officers had arrived at Mass. Hall.

Woodward, who was occupying the building Thursday morning, described the protesters as “cheerful.” At 10:30 a.m., Woodward said Faust was not in her first floor office. 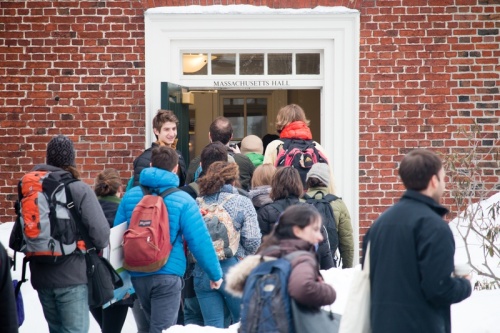 George J Lok
On Feb. 12, at 10AM, around 40 students from Divest Harvard occupied Mass Hall, home to the office of University President Drew Faust .

“We’re trying to put as much pressure on them as possible,” he said. “We are going to reiterate our call for divestment—we’re no longer settling for a meeting—we have to take action now.”

Rothstein, a co-coordinator for Divest Harvard partaking in the Thursday demonstration, said the group does not have any immediate plans to leave.

The 40 students executed their plan, which Woodward said has been in the works since last fall, by all walking in through the final locked door behind an administrator at once. Woodward would not disclose how long the students plan to sit-in in Mass Hall, but said they have secured the bathroom.

http://democracynow.org – NBC News has suspended anchor Brian Williams for six months without pay for making false statements about a 2003 incident in Iraq. Williams apologized last week after it emerged he had wrongly claimed he was on board a U.S. helicopter downed by rocket fire. American soldiers publicly challenged Williams’ account, saying he was nowhere near the aircraft that came under attack. Williams has blamed the “fog of memory” for his mistake. But in a statement, NBC said Williams’ claims were “wrong and completely inappropriate for someone in Brian’s position.” We are joined by Norman Solomon, author of “War Made Easy: How Presidents and Pundits Keep Spinning Us to Death.”