U.S. EPA is urging the State Department to “revisit” its assessment of the potential global warming impacts of TransCanada Corp.’s Keystone XL oil pipeline in a comment letter released today.

“Given the recent variability in oil prices, it is important to revisit these conclusions,” EPA Assistant Administrator for Enforcement and Compliance Cynthia Giles wrote.

The EPA letter goes to the heart of the debate about whether the Obama administration should allow KXL to cross the border as a conduit for Alberta oil sands developers.

Buzz Aldrin: How To Get Your Ass To Mars

How Moon Phases Would Look From ‘Otherside’

This NASA animation flips the Moon’s phases and libration (See all of 2015’s phase here: http://goo.gl/Rvp0ri) to a vantage point beyond the lunar ‘far side’ from which our Earth’s phases can also be seen. — Best Beginners Telescopes (Reviews and Buying Guide): http://goo.gl/hMMCFf

Teaneck Farmer’s Market: Where Food is the Common Denominator

Climate change is happening, humans are the cause, and a shocking number of congressional Republicans — over 56 percent — deny or question the science. CAP Action conducted a fresh analysis of public statements from current Representatives and Senators from the 114th Congress on climate change. Roll over any state on the map below for information on its resident climate science deniers, or click on the state to be taken to the full quotes and figures. 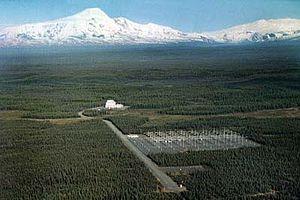 The High Frequency Active Auroral Research Program (HAARP) is an ionospheric research program jointly funded by the U.S. Air Force, the U.S. Navy, the University of Alaska[clarification needed], and the Defense Advanced Research Projects Agency (DARPA).[1] Designed and built by BAE Advanced Technologies (BAEAT), its purpose is to analyze the ionosphere and investigate the potential for developing ionospheric enhancement technology for radio communications and surveillance.[2] The HAARP program operates a major sub-arctic facility, named the HAARP Research Station, on an Air Force–owned site near Gakona, Alaska.

The most prominent instrument at the HAARP Station is the Ionospheric Research Instrument (IRI), a high-power radio frequency transmitter facility operating in the high frequency (HF) band. The IRI is used to temporarily excite a limited area of the Ionosphere. Other instruments, such as a VHF and a UHF radar, a fluxgate magnetometer, a digisonde (an ionospheric sounding device), and an induction magnetometer, are used to study the physical processes that occur in the excited region.

Work on the HAARP Station began in 1993. The current working IRI was completed in 2007, and its prime contractor was BAE Systems Advanced Technologies.[1] As of 2008, HAARP had incurred around $250 million in tax-funded construction and operating costs. It was reported to be temporarily shut down in May 2013, awaiting a change of contractors. In May 2014, it was announced that the HAARP program would be permanently shut down later in the year.[3]

HAARP was a target of conspiracy theorists, who claimed that it was capable of modifying weather, disabling satellites and exerting mind control over people, and that it was being used as a weapon against terrorists. Such theorists blamed the program for causing earthquakes, droughts, storms and floods, diseases such as Gulf War Syndrome and Chronic Fatigue Syndrome, the 1996 crash of TWA Flight 800, and the 2003 destruction of the space shuttle Columbia. Commentators and scientists say that proponents of these theories are “uninformed”, because most theories put forward fall well outside the abilities of the facility and often outside the scope of natural science.[4][5]

The HAARP program began in 1990. A powerful U.S. senator from Alaska, Republican Ted Stevens, helped win approval for the facility,[6] whose construction began in 1993.

In early May 2013, HAARP was temporarily shut down, awaiting a change between contractors who operated the facility. In July 2013, HAARP program manager James Keeney said, “Defense Advanced Research Projects Agency (DARPA) is expected on site as a client to finish up some research in fall 2013 and winter 2014.”[7][8] The temporary shutdown was described as being due to “a contractor regime change.” Ahtna, Incorporated, the Alaska Native corporation serving the region of Alaska where the HAARP site is located, was reportedly in talks to take over the facility administration contract from Marsh Creek, LLC.[9]

Consumerism has broken its promise. Perhaps now we can begin to reconnect.

By George Monbiot, published in the Guardian 4th February 2015

A woman walks into a department store. She takes in the racks and stacks of stuff, the sugared music, the sale signs, the listless customers shuffling through the aisles, and is moved – suddenly and to her own astonishment – to shout. “Is this all there is?!”. An assistant comes round from behind his till. “No madam. There’s more in our catalogue.”

This is the answer we have been given to everything, the only answer. We might have lost our attachments, our communities, our sense of meaning and purpose, but there will be more money and more stuff with which to replace them. Now that the promise has evaporated, the size of the void becomes intelligible.

It’s not that the old dispensation was necessarily better: it was bad in different ways. Hierarchies of class and gender crush the human spirit as effectively as atomisation. The point is that the void that was filled with junk is a void that could have been occupied by a better society, built on mutual support and connectedness, without the stifling stratification of the old order. But the movements that helped to smash the old world were facilitated and co-opted by consumerism.

Head to Head – Has capitalism failed the world?

At the famous Oxford Union, Mehdi Hasan challenges former top financial regulator Lord Adair Turner on the role of the banks, the politics behind austerity and whether capitalism has failed.It seems that mistakes made in Wall Street and the City of London are paid for by people around the world, but can we govern greed within the realm of capitalism or is it all just money down the drain? Is austerity really needed? Can we trust the banks?Joining our discussion are: Jon Moulton, a venture capitalist and the founder of the private equity firm Better Capital. He has nurtured a reputation for forthrightness even to point of challenging his private equity peers for abusing tax regimes. He is also one of the few men in the City of London who warned about the impending crash before it happened; Professor Costas Lapavitsas, who teaches economics at the School of Oriental and African Studies (SOAS) at the University of London and is the author of several notable books on the crash and its consequences including Crisis in the Eurozone and Financialisation in Crisis; and Ann Pettifor, the director of PRIME (Policy Research in Macroeconomics), and a fellow of the New Economics Foundation. She was one of the first to warn about the debt crisis in her book The Coming First World Debt Crisis, and is also well-known for her leadership of the successful worldwide campaign to cancel developing world debt – Jubilee 2000.

Brian Halweil, Edible Manhattan, keynoting on the “Family Farmers Creating Resilience in the Food System” panel at the 2015 Food Tank Summit in partnership with the George Washington University.