“A lot of people are setting goals for how we want to move our data and the cloud to be clean, Apple’s section of the cloud is clean today. That didn’t happen by accident,” said Lisa Jackson, VP of Environmental Initiatives at Apple. Jackson discusses how deeply invested Apple is in clean, renewable energy.

This program was recorded before a live audience on January 14, 2015.

No one voted on Election Day to let big polluters destroy our natural heritage, increase our dependence on dirty fossil fuels or create more climate chaos. But that’s exactly what the leaders of the new Congress are planning to do. President Obama has the power to stop this attack — but he needs to hear from millions of us right now.
– Robert Redford

Join Robert Redford and NRDC in asking President Obama to stand up to Congress and defend our health, our families and our environment. http://on.nrdc.org/1FLU8lo

Lisa Jackson, VP of Environmental Initiatives at Apple, discusses divestment and how it applies to Apple. “When you look at Apple stock, you’re looking at a company that’s 94% clean energy in all of its corporate facilities, and saying that’s just the beginning,” says Jackson. “The difference at Apple is something Tim talks a lot about which is, I think, part of the reason I’m there is that we understand that we need to talk about it. We need to say to people, ‘Stop saying it can’t be done. Here it is.'”

This program was recorded before a live audience on January 14, 2015.

Abby Martin Breaks the Set on Senate’s Climate Denialists, Fraccidents Across US, Eco-terrorist Entrapment & The Danger of Competition.

Abby Martin discusses how the Super Bowl promotes the ideals of military intervention and allows the NFL to fleece tax payers for millions of dollars.

Cracked ground of near Jaguary dam in Braganca Paulista, 100 km from Sao Paulo. 2014 was the warmest on record, according to US agencies. Photograph: Nacho Cubero/REUTERS

Fourteen of the 15 hottest years on record have occurred since 2000, according to the UN World Meteorological Organisation, as rising carbon emissions continue to trap heat and drive climate change.

The WMO’s new analysis narrowly places 2014 as the hottest recorded since 1850, as have recent analyses from other organisations. The WMO analysis is particularly authoritative as it brings together a number of leading temperature records, as well as alternative ways of estimating the warmth of the globe.

The average global air temperatures over land and sea in 2014 were 0.57C above the average of 14.00C for the 1961-1990 reference period. The record temperature was above those in 2005 and 2010, the next hottest years, but only by a small amount which was within the margin of uncertainty in the calculations.

Should We Be Afraid Of Death? : NPR 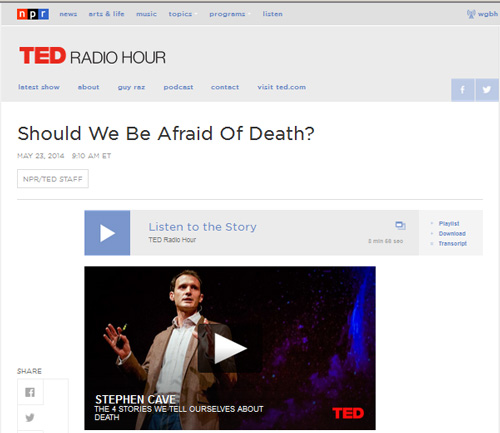 Philosopher Stephen Cave delves into the simple question: Why are human beings afraid to die?

Stephen Cave is a writer and philosopher who is obsessed with our obsession with immortality. He’s the author of Immortality: The Quest to Live Forever and How It Drives Civilization, an inquiry into humanity’s irrational resistance to the inevitability of death.

Cave moves across time, religion and history’s major civilizations to explore just what drives this instinct. Cave also writes for The Financial Times and contributes to The New York Times, The Guardian and Wired.

Posted on February 2, 2015 by Robert Stavins

At the recent climate negotiations at the 20th Conference of the Parties (COP-20) of the United Nations Framework Convention on Climate Change (UNFCCC) in Lima, Peru, a very important issue was left on the table, unresolved: Will the 2015 Paris Agreement (scheduled to be signed in December of this year at COP-21) facilitate – or at least avoid inhibiting – international linkage of national (and for that matter, sub-national) climate policies?

In the Durban Platform for Enhanced Action, adopted by COP-17 in 2011, negotiators agreed to develop a new legal instrument “under the Convention applicable to all Parties,” for adoption at COP-21 in December, 2015, in Paris. With the Lima talks now behind us, it appears that the 2015 agreement will reflect a hybrid climate policy architecture—one that combines top-down elements, such as for monitoring, reporting, and verification, with bottom-up elements, including “Intended Nationally Determined Contributions” (INDCs), describing what a country intends to do to reduce emissions, based on domestic political feasibility and other factors. (I wrote about this in Assessing the Outcome of the Lima Climate Talks, posted on December 14, 2014.)

What’s the right temperature for the Earth? – The Washington Post

And what happens when countries disagree about what it should be? 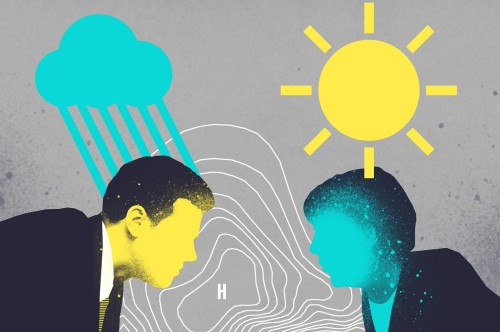 Andy Parker is a research fellow at the Institute for Advanced Sustainability Studies in Potsdam, Germany. David Keith is a professor of applied science and public policy at Harvard and executive chairman at Carbon Engineering.

Imagine being able to control the temperature of the Earth like a home thermostat, turning it down a few notches to reduce the effects of global warming. That’s the goal of solar geoengineering. By spraying aerosols into the stratosphere, we could block a fraction of inbound sunlight and temporarily cool the Earth.

But just as home thermostats are notorious for setting off domestic squabbles — she bumps it up to 72, he ratchets it down to 64 — solar geoengineering could spark serious conflicts, ranging from sanctions to war between world powers.

The question is: How should we approach technology with such lifesaving potential when it could also disrupt the international order on a scale not seen since the advent of the atom bomb?

Long treated as an illegitimate child of the climate-science community and rarely mentioned in polite company, solar geoengineering is now coming of age. The Royal Society, the oldest scientific academy in the world, mainstreamed the issue with the publication of the seminal report “Geoengineering the Climate” in 2009. Many respected institutions have published their own major reports since then, and the U.S. National Academy of Sciences is scheduled to release one in February. Meanwhile, the first small-scale, real-world experiments are taking shape and, if they can secure funding, could begin within two years.