How Has the World Warmed Where You Live? | Climate of Doubt 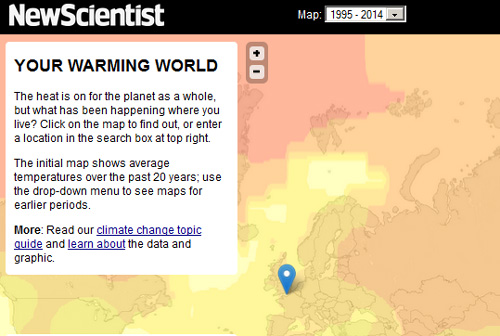 Last year was the warmest year in recorded history, scientists announced last week. That warming, however, hasn’t been uniform across the globe. Since the start of official record-keeping in 1880, the Earth’s poles have seen the greatest increase in average surface temperatures, while areas near the equator have seen a less dramatic change.

The map below from New Scientist shows how temperatures have changed over the last 120 years when compared against a 30-year baseline period — 1951 to 1980. Land-based temperature measurements (°C) were pulled from 6,000 monitoring stations scattered throughout the globe; ocean temperature readings were made by ships from 1880 to 1981, and using satellite measurements since 1982. The analysis was done by a team at NASA’s Goddard Institute for Space Studies in New York City.

Move the marker to track changes in surface temperature at different locations, or use the search field to find a specific city.

The rich get richer, with no end in sight 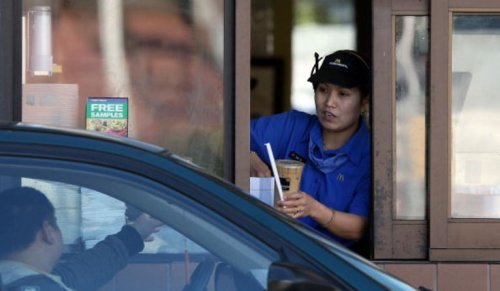 A McDonald’s drive-through worker hands an order to a customer in San Francisco.

In a new report, Oxfam says that by 2016, the wealthiest 1 percent of people may control more than 50 percnet of the world’s wealth.

Inequality has proven to be a durable and thorny problem, and economists are divided over how to tackle it. Some argue for the “redistribution” of wealth, in the form of higher taxes on the rich, or increased subsidies for the poor.

Some say it’s better to tackle the root causes of inequality, like the millions of Americans stuck in low-wage jobs. They argue that better education and training are needed to prepare workers for better-paid jobs in science and technology.

Others, meanwhile, argue there’s no problem. And while politicians and experts debate the issue, inequality is likely to grow.