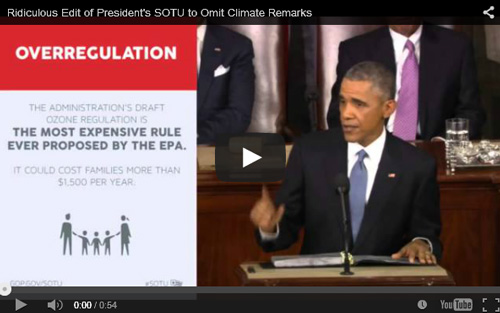 We are never deceived; we deceive ourselves

No longer just a war on science.

Tip to Climate Deniers. In the war between you and reality, in the long run, the smart money will be on reality.

The official website for House Republicans has posted on YouTube a version of President Obama’s State of the Union address which cuts out comments where the President was critical of Republican rhetoric on climate change, ThinkProgress has learned.

In the website’s “enhanced webcast” of the State of the Union speech, President Obama’s comments criticizing Republicans for saying they are “not scientists” when it comes to climate change are erased.

At the 43:25 minute mark, President Obama is supposed to say “I’ve heard some folks try to dodge the evidence by saying they’re not scientists; that we don’t have enough information to act. Well, I’m not a scientist, either. But you know what — I know a lot of really good scientists at NASA, and NOAA, and at our major universities. The best scientists in the world are all telling us that our activities are changing the climate, and if we do not act forcefully, we’ll continue to see rising oceans, longer, hotter heat waves, dangerous droughts and floods, and massive disruptions that can trigger greater migration, conflict, and hunger around the globe.”

Instead, the entire section is skipped. Obama’s comments resume with “The Pentagon says that climate change poses immediate risks to our national security. We should act like it.”

You can watch the gop.gov version of the video here.

FYI, according to Climate Progress, “Boehner’s Press Secretary Michael Steel told ThinkProgress Wednesday afternoon that the video edits were not intentionally made. “It was inadvertent.” Steel said via e-mail. “We are working with YouTube to figure out what happened.”

Well, I’m not a scientist, but I am a videographer, and a YouTuber. When I screw up a video, I don’t “work with YouTube” – I take it down and put up the correct version.

The Marx Brothers could not have staged this better.

…the entire passage is missing, with a painfully obvious skip in the words, and picks up only with Obama saying, “The Pentagon says that climate change poses immediate risks to our national security. We should act like it.” Maybe they left that part in since it sounded like we could start bombing the climate if it refuses to comply with our demands.