Welcome to this week’s roundup (Jan. 13-20, 2015) of must-read stories in the world of money and politics. Check back on Tuesday afternoons for more on the increasing influence of the super-rich on American government. In the comments section below, we’d love to hear your thoughts on these stories and any we may have missed.

Republicans and Wall Street Say to Hell With Protecting the Public!

Since December, Congress has twice passed measures to weaken regulations in the Dodd-Frank financial law that are intended to reduce the risk of another financial meltdown.

In the last election cycle, Wall Street banks and financial interests spent over $1.2 billion on lobbying and campaign contributions, according to Americans for Financial Reform. Their spending strategy appears to be working. Just this week, the House passed further legislation that would delay by two years some key provisions of Dodd-Frank. “[Banks] want to be able to do things their way, and that’s very dangerous.” MIT economist Simon Johnson tells Bill.

“‘Here we go again’ — I think that’s exactly the motto, or the bumper sticker for this Congress. It’s crazy, it’s unconscionable, but that is the reality.”

Lawmakers are pinning these provisions to Dodd-Frank onto bigger must-past bills like spending measures that the president doesn’t dare veto.

Bill Moyers: The safeguards that Congress is tearing down, even as we speak, were put in place after the financial disaster of 2008 to prevent another one like it from happening. Why do you think the Republicans are trying to sabotage them?

Simon Johnson: It’s mostly the lobby, specifically a few very large banks that don’t like those restrictions on their activities. They want to be able to take more risk. They’re not worried of course about how that could negatively impact the rest of us, and they’ve persuaded the Republicans to help them in that quest.

Moyers: Are they putting depositors and taxpayers at risk?

Johnson: Yes, absolutely. That’s the core of the reforms: Try and make sure — and it’s hard — that part of the financial system is safe; that depositors are safe; that the taxpayers, as the ultimate backstop for deposits, are safe; and of course, try and make sure that you don’t have a huge crisis that affects the broader economy with millions of people being thrown out of work. That’s the goal. And JPMorgan, Chase, Citigroup, Bank of America and Wells Fargo don’t like that. They want to be able to do things their way, and that’s very dangerous.

How Is ‘Citizens United’ Ruining Democracy and How Can We Stop It?

The Supreme Court’s 2010 Citizens United v. FEC decision changed our political landscape, allowing outside spending groups (and their often undisclosed donors) more influence than ever before. How bad is it?

At a recent NYU Brennan Center symposium, representatives from eight good government groups presented new research on outside spending, its real-world implications and what can be done to curb it. We rounded up eight key takeaways from the day.

1. Spending is totally out of control.

As Demos’s Karen Shanton explains, this need to constantly raise money determines “the types of candidates who make it through the process and into office, as well as the policies that end up getting enacted once they get there.”

2. A bunch of (undisclosed) millionaires can swing elections.

Total outside spending in elections doubled from 2010 to 2014 — and that spending plays its biggest role in tight races, according to Ian Vandewalker’s data from the Brennan Center. As outside spending skyrockets, the influence of a few millionaires becomes amplified:

Undisclosed donations are also on the rise. This election cycle, dark money made up 28 percent of all spending in competitive Senate races. The winners of the 11 closest races benefited from $131 million in dark money, $23 million of which was behind Sen. Thom Tillis (R-NC).

Much of the buildup to President Obama’s State of the Union address made it sound as if he was going to read chapter and verse from French economist Thomas Piketty’s book, Capital in the 21st Century –

you know, last year’s 700-plus page best seller, the one that was unexpectedly all the rage as it argued that vast economic inequality is as much about wealth (what’s owned) as it is about income (what’s earned). That one.

Matt Schiavenza explained it in The Atlantic, “Applying data gathered across several decades throughout the world, Piketty argued that when income derived from capital exceeds income derived from work, inequality necessarily widens. Or, in non-economics speak: The easiest way to get rich isn’t to make a lot of money. It’s to have a lot of assets in the first place. Better yet to inherit it.”

Not that anyone really expected the president to address Congress like a tutorial in global economics, but the Piketty meme took hold in a lot of the media. “Echoes of Piketty in Obama Proposal to Address Income Inequality” read a headline in The New York Times previewing the address just hours before it was delivered. The Washington Post’s Wonkblog predicted, “President Obama finally has his Piketty moment.” The paper’s Matt O’Brien wrote, “The state of the union is pretty good, actually, but President Obama has an idea to make it better: taxing Wall Street and the super-rich to make middle-class work even more worthwhile. It’s Piketty with an American accent.”

Obama: No Challenge Poses a Greater Threat Than Climate Change 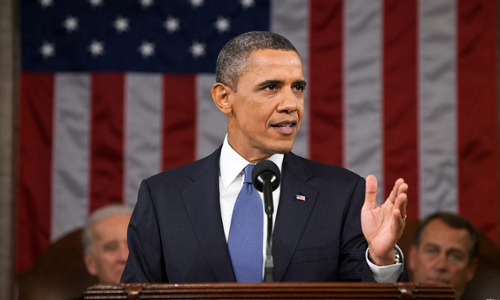 There was a lot of buzz beforehand about what President Obama would say and what he should say about climate change in his State of the Union address. In the end, he devoted three minutes of the hour-long speech to it, and much of what he said either touted his accomplishments or emphasized his previous positions. But he expressed forcefully how essential it is to acknowledge what scientists say and act on it.
ObamaDenyingScienceHe’s not a scientist but he’s willing to believe what scientists say. Photo credit: WhiteHouse.gov

He began by saying, “No challenge—no challenge—poses a greater threat to future generations than climate change. 2014 was the planet’s warmest year on record. Now, one year doesn’t make a trend, but this does—14 of the 15 warmest years on record have all fallen in the first 15 years of this century.”

NASA | A Year in the Life of Earth’s CO2

An ultra-high-resolution NASA computer model has given scientists a stunning new look at how carbon dioxide in the atmosphere travels around the globe.

The Context for Transition Studies: Global Trends from 1900 to 2008

Further reflections on the uniquely important role of Balliol include:

Thom Hartmann on Science & Green News for the week of January 19, 2015

What kind of agriculture are we leaving as a legacy to the next generation?

Thom Hartmann on Science & Green News for the week of January 19, 2015