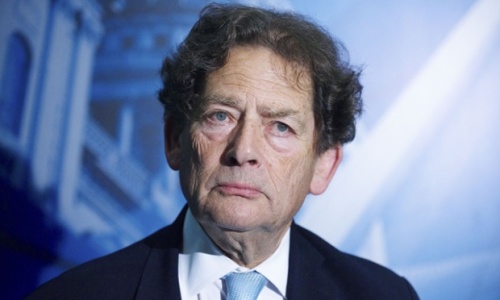 Neil Record and Nigel Vinson confirm their donations, and are both linked to thinktank that took funds from oil companies

Two secret funders of Nigel Lawson’s climate sceptic organisation have been revealed. This is the first time anyone financing the group has confirmed their contributions. Both are linked to a free-market thinktank, the Institute of Economic Affairs (IEA), which has admitted taking funding from fossil fuel companies and has also argued against climate change mitigation.

Lord Lawson has steadfastly refused to name the funders of the Global Warming Policy Foundation since its inception in 2009, stating only that none have significant fossil fuel interests. The GWPF has become the most prominent climate sceptic group in the UK, but critics of the GWPF argue that funders’ names should be made public in the interest of transparency.

The names were uncovered by the investigative blog Desmog UK. Neil Record, the founding chairman of a currency management company Record and an IEA trustee, confirmed he has given money to the GWPF but said the amount was a “private matter”. Record gave the IEA £36,000 to support a seminar featuring Lawson in November 2009 and on the same day Lawson launched the GWPF. Record told the Guardian: “I personally regard the continuing contribution of the GWPF to the climate change debate as very positive in assisting balance and rationality in this contentious area.”

Lord Nigel Vinson, a wealthy industrialist and life vice-president of the IEA, has given the GWPF £15,000 according to Charity Commission records. “I am very proud to fund [the GWPF],” he told the Guardian. “You have to put a question mark over climate change if over the last 14 years the world has not got any hotter.” Scientists argue this “pause” in air temperatures is an illusion, based on cherry-picked data and ignoring the fact that over 90% of trapped heat enters the oceans.

Record and Vinson are the first GWPF funders to confirm their donations. Sir Michael Hintze, a major Conservative donor and hedge fund tycoon, was named by the Guardian in 2012 as a GWPF funder but has not confirmed or denied his GWPF link. Like Record, Hintze is an IEA trustee.

London, 19 January: A new paper by Andrew Montford and published today by the Global Warming Policy Foundation examines the unintended consequences of climate change policy around the world.

We are constantly told about the risks of what climate change might bring in the distant future. In response, governments have adopted a series of policy measures that have been largely ineffective but have brought with them a bewildering array of unintended consequences.

From the destruction of the landscape wrought by windfarms, to the graft and corruption that has been introduced by the carbon markets, to the disastrous promotion of biofuels, carbon mitigation policies have brought chaos in their wake.

The new paper surveys some of the key policy measures, reviewing the unintended consequences for both the UK and the rest of the world. Mr Montford is a prominent writer on climate change and energy policy and has appeared many times in the media.

“The most shameful aspect of the developed world’s rush to implement climate change mitigation policies is that they have often been justified by reference to ethics. Yet the results have been the very opposite of ethical.” said Mr Montford.

“Andrew Montford has reviewed the sad truth about various schemes to ‘save the planet’ from the demonized but life-giving gas CO2: from bird-killing windmills, native peoples expelled from their ancestral lands, to fraud in the trading of carbon credits. Every thinking citizen of the planet should read this,” said William Happer, Professor of Physics at Princeton University.

The Campaign against Climate Change is grateful for the support of our honorary officers and advisory group (listed below). The management of the campaign is undertaken by the elected steering committee, the members of which also do a lot of practical work organising events, etc.

So, with all these people involved, who’s answering the telephones when you call the office? It’s likely to be Claire James, who as well as being on the steering committee has recently taken on the role of Campaigns Coordinator (part-time); Jonathan Neale (also on the steering committee), or our stalwart volunteers Lindsay Alderton, Ewan Nicolson or Tabby Spence.

Of course, the campaign is more than just the people listed on this page – it also includes everyone who lends a hand when they can, is active in our campaigning, and those who, for a few pounds a month, make our vital work possible.

Making room for micro-entrepreneurs in the sharing economy

The growing American “share economy” makes use of people’s preexisting and underutilized assets and time. Hospitality website Airbnb helps turn empty guest rooms into makeshift hotel rooms. But what happens to actual hotels and bed and breakfasts that have to conform to greater regulation and charge higher prices? Economics correspondent Paul Solman reports.

The Sharing Economy – By the People, For the People

“If you want to change something, don’t attack the existing reality. Instead, build a new model that makes the old one irrelevant.” Quoting Buckminster Fuller, David Van Seters believes the sharing economy will help make the current dysfunctional economy obsolete. Sharing is age-old, he says. Now combined with internet social media, it is becoming an unstoppable phenomenon. He cites examples of sharing rooms and homes, empty space in cargo trucks, tools, land, and even “waste” materials. Many people start a sharing enterprise to save money or get supplemental income for under-utilized assets. “But what causes them to continue is the surprising amount of benefit from community connections.” Episode 281. [sustainabilityventures.ca]

Smith School of Enterprise and Environment 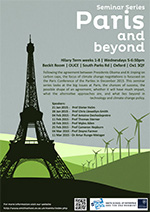 Following the agreement between Presidents Obama and Xi Jinping on carbon caps, the focus of climate change negotiations is focussed on the Paris Conference of the Parties in December 2015. This seminar series looks at the big issues at Paris, the chances of success, the possible shape of an agreement, whether it will have much impact, what the alternative approaches are, and what lies beyond in technology and climate change policy.

Speakers:
21 Jan 2015 – Prof Dieter Helm – “A Critique of the Kyoto and Paris Architecture – Why They Won’t Solve Climate Change”

“A Critique of the Kyoto and Paris Architecture – Why They Won’t Solve Climate Change”
Semnar 1 | Week 1 | Wednesday 21 January 2015
Prof Dieter Helm | Professorial Research Fellow, Smith School of Enterprise and the Environment, University of Oxford and Chair of the Natural Capital Committee.

“Is a Climate Treaty A) Necessary and B) Possible”
Seminar 4 | Week 4 | Wednesday 11 February 2015
Prof Thomas Sterner | Professor of Environmental Economics, University of Gothenburg.

18 Feb 2015 – Prof Myles Allen – “What’s the one thing we actually need a climate treaty for — and which they won’t be discussing in Paris?”
25 Feb 2015 – Prof Cameron Hepburn – “Climate Policy and Some Deadly Serious Game Theory”
04 Mar 2015 – Prof Doyne Farmer – (Innovation & the Prospects of Solar) – “Technological progress and the green energy transition”
11 Mar 2015 – Dr Artur Runge-Metzger – “The Road to Paris and Beyond: Prospects of an Ambitious Global Deal”

This series is open to all 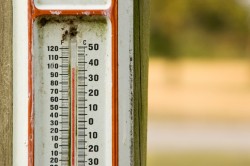 Professor Jo Haigh, Co-Director of the Grantham Institute, commented on the report saying that: “This and other indicators are all pointing in the same direction of continued global warming, reflecting the overall upward trend in average global temperatures”

A large amount of warming was seen in the oceans with globally-averaged sea surface temperature 0.57°C above the 20th century average. This is consistent with recent studies that have suggested that much of the extra energy in the Earth system is going in to the oceans. You can read more about the significance of ocean heat uptake in our blog post.

An update from the Met Office on global temperatures is expected later this month and we look forward to seeing the further detail that this will add.

The Logic of Divestment: Why We Have to Kiss Off Big Carbon Now

As climate-change activists pressure public institutions to dump their fossil-fuel investments, it’s becoming increasingly clear that the right thing to do is also the smart thing to do.

hen the fossil-fuel divestment movement first stirred on college campuses three years ago, you could almost hear Big Oil and Wall Street laughing. Crude prices were flirting with $100 a barrel, and domestic oil production, from Texas to North Dakota, was in the midst of a historic boom. But the quixotic campus campaign suddenly has the smell of smart money.

One of the biggest names in the history of Big Oil – the Rockefellers – announced last September that they would be purging the portfolio of the Rockefeller Brothers Fund of “risky” oil investments. And that risk has been underscored by the sudden collapse of the oil market. After cresting at more than $107 in mid-June, the price of a barrel of West Texas Intermediate dipped below $50 a barrel in early January. The crash carries big costs: Goldman Sachs warned that nearly $1 trillion in planned oil-field investments would be unprofitable – even if oil were to stabilize at $70 per barrel. The industry is already scaling back the hunt for high-cost sources of new oil. Chevron has shelved drilling in the Canadian Arctic, and Hercules Offshore, a significant driller in the Gulf of Mexico, has idled four rigs and laid off more than 300 workers.

Plunging profits are also putting the brakes on fracking. The biggest player in North Dakota, Continental Resources, is cutting expansion plans by more than 40 percent for 2015. And if crude prices drop much lower, the U.S. boom could go bust. The break-even price in North Dakota’s Bakken field, Continental CEO Harold Hamm confessed to Business Week in November, is $50 a barrel. Oil’s collapse threatens to destabilize global governments from Caracas to Tehran to Moscow. And it is punishing the valuations of oil companies: From late June to early January, across the world, the 10 oil firms with the largest proven reserves collectively lost roughly 20 percent of their market value.

ealth accumulated by the richest one percent will exceed that of the other 99 percent in 2016, the Oxfam charity said Monday, ahead of the annual meeting of the world’s most powerful at Davos, Switzerland.

“The scale of global inequality is quite simply staggering and despite the issues shooting up the global agenda, the gap between the richest and the rest is widening fast,” Oxfam executive director Winnie Byanyima said.

The richest one percent’s share of global wealth increased from 44 percent in 2009 to 48 percent in 2014, the British charity said in a report, adding that it will be more that 50 percent in 2016.

The average wealth per adult in this group is $2.7 million (2.3 million euros), Oxfam said.

Of the remaining 52 percent, almost all — 46 percent — is owned by the rest of the richest fifth of the world’s population, leaving the other 80 percent to share just 5.5 percent with an average wealth of $3,851 (3,330 euros) per adult, the report says.

Byanyima, who is to co-chair at the Davos World Economic Forum taking place Wednesday through Friday, urged leaders to take on “vested interests that stand in the way of a fairer and more prosperous world.”

Oxfam called upon states to tackle tax evasion, improve public services, tax capital rather than labour, and introduce living minimum wages, among other measures, in a bid to ensure a more equitable distribution of wealth.

The 45th World Economic Forum that runs from Wednesday to Saturday will draw a record number of participants this year with more than 300 heads of state and government attending.

Rising inequality will be competing with other global crises including terrorist threats in Europe, the worst post-Cold War stand-off between Russia and the West and renewed fears of financial turmoil.