The Guardian view on Paris 2015: the world’s last best chance to reach an agreement on cutting carbon emissions

The pope, President Obama and President Xi are all on the same side. But it doesn’t guarantee victory 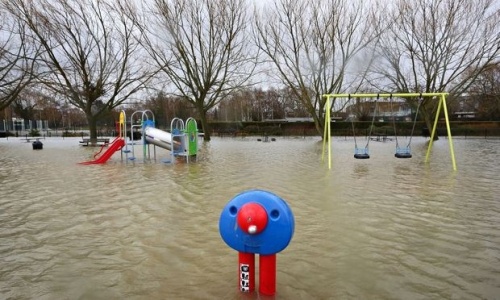 A children’s playground in Tonbridge, Kent, is flooded during last December’s winter weather, leaving ‘no one in any doubt of what an extreme weather event would look like’. Photograph: Gareth Fuller/PA

This time last year the water was lapping at front doors from Godalming in Surrey and Tonbridge in Kent, they were still clearing up after a tidal surge along the east coast in early December, the Scottish lowlands were on full flood alert and there were ominous signs of the catastrophe looming for the Somerset levels. No single weather event is evidence of climate change, but the freak weather of those months left no one in any doubt of what an extreme weather event would look like. There was nothing more for the climate change scientists to add.

This time next year, the Paris summit that holds out the best hope for a broad, UN-brokered agreement on cutting carbon emissions will be over. It is of universal importance that a deal is struck that is ambitious and achievable. There are several reasons why that looks more possible now than it has done for years. President Barack Obama clearly hopes that he can make climate change part of his legacy. He is reportedly ready to use his powers to override Congressional opposition to his proposal for a cut in carbon emissions, by 2025, of between 26% and 28% over the 2005 level. The US readiness to make a commitment was matched by China’s president Xi Jinping, for the first time, offering a date for “peak” carbon emissions of 2030. The agreement, announced in November after the two leaders met in China, was welcomed by the UN’s climate change chief, Christiana Figueres, who said it would make a real contribution to the success of the Paris conference. And the EU has agreed to a 40% cut in greenhouse gas emissions by 2030 compared with 1990, as well as to new targets for the generation of renewable energy.

In the aftermath of the fractious recently concluded global climate talks in Lima, Peru, Naomi Klein’s remarkable book This Changes Everything: Capitalism vs. the Climate (Simon & Schuster, 2014) takes on new relevance for everyone yearning for solutions to the climate crisis.

The book is a deeply insightful and unflinching look at the global threats posed by climate change, environmental devastation, and economic injustice.

We must confront them, Klein says, by first ripping away the ideological underpinnings of the political and economic systems that created and perpetuate these parallel crises. That underlying ideology is a belief in the virtues of unregulated, free-market capitalism.

After delegitimizing it, we must tackle economic inequality, environmental injustice, and climate change in a unified way, Klein maintains. That’s because they are inextricably interrelated and because the climate crisis may be our last and best chance to simultaneously save civilization and redress its wrongs.

We are the last generation that can fight climate change. We have a duty to act | Ban Ki-moon

After a year of global turmoil, the UN and international community must work harder than ever for a sustainable future

Bangladeshi children playing on the bank of the dried up river Kaliganga. ‘We must aim to keep the rise in global temperatures below the dangerous threshold of 2C.’ Photograph: Zakir Hossain Chowdhury/Zuma Press/Corbis

This year the UN marks its 70th anniversary. Sadly, there is little time for reflection or celebration. More pressing are the competing demands and challenges fuelled by an upsurge in conflict, disease and human suffering. These compel the international community to step up and provide the leadership needed to tackle them.

Ebola continues to plague west Africa. For some of the affected countries, struggling to overcome the effects of bitter civil war, the outbreak has been a major setback for development. We are beginning to see some improvements. During my visit to the region in December, I was deeply moved by the efforts of local Ebola responders and health workers from across Africa and the world. But rebuilding shattered lives and economies will require significantly more resources and long-term commitment.

As conflicts raged and extremism rose, 2014 pushed the UN’s humanitarian, peacekeeping and diplomatic efforts to the limit. More than 100 million people needed assistance. An unprecedented number of UN troops and police are deployed in highly volatile security environments.

The elimination of Syria’s chemical weapons programme was a major achievement, but the conflict continues to inflict immense suffering and will soon enter its fifth year. As bitter winter conditions set in, millions of refugees are in need of life-saving humanitarian assistance. The presence of thousands of foreign terrorist fighters there and in Iraq has added a further volatile dimension.

Date:
January 8, 2015
Source:
Newsy / Powered by NewsLook.com
Summary:
A new report has detailed how much of the world’s fossil fuels reserves we can use before reaching dangerous levels of climate change. Video provided by Newsy

Which fossil fuel reserves must stay in the ground to avoid dangerous climate change? — ScienceDaily

Date:  January 7, 2015
Source: University College London – UCL
Summary: A third of oil reserves, half of gas reserves and over 80% of current coal reserves globally should remain in the ground and not be used before 2050 if global warming is to stay below the 2°C target agreed by policy makers, according to new research.

A third of oil reserves, half of gas reserves and over 80% of current coal reserves globally should remain in the ground and not be used before 2050 if global warming is to stay below the 2°C target agreed by policy makers, according to new research by the UCL Institute for Sustainable Resources.

The study funded by the UK Energy Research Centre and published in Nature today, also identifies the geographic location of existing reserves that should remain unused and so sets out the regions that stand to lose most from achieving the 2°C goal.

The development of resources in the Arctic and any increase in unconventional oil — oil of a poor quality which is hard to extract — are also found to be inconsistent with efforts to limit climate change.

For the study, the scientists first developed an innovative method for estimating the quantities, locations and nature of the world’s oil, gas and coal reserves and resources. They then used an integrated assessment model to explore which of these, along with low-carbon energy sources, should be used up to 2050 to meet the world’s energy needs. The model, which uses an internationally-recognised modelling framework, has multiple improvements on previous models, allowing it to provide a world-leading representation of the long-term production dynamics and resource potential of fossil fuels.

Lead author Dr Christophe McGlade, Research Associate at the UCL Institute for Sustainable Resources said: “We’ve now got tangible figures of the quantities and locations of fossil fuels that should remain unused in trying to keep within the 2°C temperature limit.

“Policy makers must realise that their instincts to completely use the fossil fuels within their countries are wholly incompatible with their commitments to the 2°C goal. If they go ahead with developing their own resources, they must be asked which reserves elsewhere should remain unburnt in order for the carbon budget not to be exceeded.”

Co-author Professor Paul Ekins, Professor of Resources and Environmental Policy at and Director of the UCL Institute for Sustainable Resources, who received an OBE for services to environmental policy in the 2015 New Year’s Honours list, said: “Companies spent over $670 billion (£430 billion) last year searching for and developing new fossil fuel resources. They will need to rethink such substantial budgets if policies are implemented to support the 2oC limit, especially as new discoveries cannot lead to increased aggregate production.

Series of Earthquakes in Texas Raises Potential Link to Fracking

A city in Texas has been hit with a string of earthquakes including at least 12 over a single 24-hour period, an occurrence that may be linked to the drilling practice of fracking. The U.S. Geological Survey has confirmed two more earthquakes shook the North Texas city of Irving Thursday following a series earlier last week. Previous studies have linked fracking to earthquakes in New Mexico, Colorado and Ohio through the injection of high-pressure water and chemicals to crack shale rock underground.

A new study finds more than 80 percent of the world’s known coal reserves and about half of gas reserves must remain unburned in order to avoid the most catastrophic impacts of climate change. The report published in the journal Nature outlines specific limits, saying 92 percent of U.S. coal supplies, most Canadian tar sands oil, and all oil and gas in the Arctic are “unburnable” if the world is to keep an increase in global temperatures below the agreed-upon cap of 2 degrees Celsius.

Rep. Peter DeFazio: “It’s fine to say, ‘Gee, we voted on this a lot of times before.’ Sixty-one new members of the House. Gas prices are down by almost 50 percent. A lot of things have changed. I would even wonder about the viability of this project. I did just recently learn the Koch brothers, though, have a significant investment in tar sands in Canada, but that probably has nothing to do with an attempt to expedite this project.”

Although he has yet to make a final decision on Keystone XL, President Obama has promised to veto Republican-backed attempts to approve it through Congress. The House vote fell short of a veto-proof majority. Senate Republicans will begin debate on their version of the Keystone XL approval bill today.

Towards a Green Economy: How Urgent is It? – Bob Pollin on Reality Asserts Itself

Mr. Pollin tells Paul Jay the most likely scenario is that the level of CO2 carbon dioxide emissions are going to be twice the level that the Intergovernmental Panel on Climate Change, says is necessary to have a chance to stabilize the climate

Towards a Green Economy: Fighting at the Local Level – Robert Pollin on RAI (6/9)

On Reality Asserts Itself, Mr. Pollin says a great deal can be done at the state and city levels if people are willing to take on the fossil fuel industry