Summary of the speach of Al Gore at the Climate Change Conference. “You can make a path that goes around that blank spot… ”

Hannah Morris – Counting Down the Tides 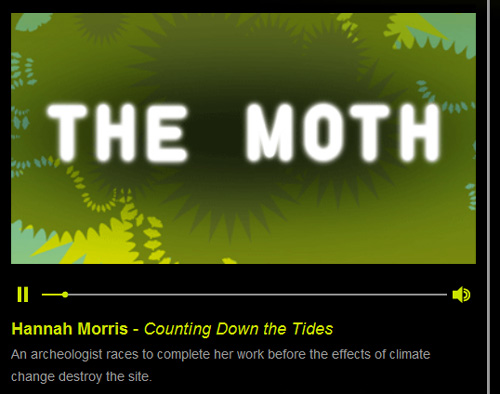 An archeologist races to complete her work before the effects of climate change destroy the site.

Excellent Sheep: The Miseducation of the American Elite and the Way to a Meaningful Life: William Deresiewicz

A groundbreaking manifesto for people searching for the kind of insight on leading, thinking, and living that elite schools should be—but aren’t—providing.

As a professor at Yale, Bill Deresiewicz saw something that troubled him deeply. His students, some of the nation’s brightest minds, were adrift when it came to the big questions: how to think critically and creatively, and how to find a sense of purpose.

Excellent Sheep takes a sharp look at the high-pressure conveyor belt that begins with parents and counselors who demand perfect grades and culminates in the skewed applications Deresiewicz saw firsthand as a member of Yale’s admissions committee. As schools shift focus from the humanities to “practical” subjects like economics and computer science, students are losing the ability to think in innovative ways. Deresiewicz explains how college should be a time for self-discovery, when students can establish their own values and measures of success, so they can forge their own path. He addresses parents, students, educators, and anyone who’s interested in the direction of American society, featuring quotes from real students and graduates he has corresponded with over the years, candidly exposing where the system is broken and clearly presenting solutions.

We Are All Seeds – A New Year Message from Dr. Vandana Shiva for 2015

Published on Dec 28, 2014
As 2015 has been declared the Year of Soils, let us recognize that in the seed and the soil we can find answers to every one of the crisis we are facing.

Join the Global Movement for Seed Freedom to stop the corporate hijack of seed:

Abundant, cheap fossil fuels have driven explosive technological, industrial and economic expansion for more than a century. The pervasive infrastructure developed to accommodate this growth makes it difficult to contemplate rapidly shifting away from coal, oil and gas, which creates a psychological barrier to rational discourse on energy issues.

The ecological and true economic costs of energy use force us to scrutinize our way of living. And because our infrastructure doesn’t allow us to entirely avoid fossil fuels, we must face the contradiction between how we should live and constraints against doing so.

If our leaders are serious about long-term health and prosperity, they need to stop focusing on short-term profits from rapid fossil fuel development and export and start engaging in serious conversations about our energy future.

Canada has no national energy plan, other than governmental desire to be a fossil-fuelled energy-export superpower. Given the consequences of human-induced climate change already hitting home, you’d think the highest priority of governments at all levels would be to decide on the lowest-emission energy path. But politicians focused on election intervals have difficulty dealing with generational issues.

Real, important conversations and decisions are instead delayed by diversionary and often irrational arguments and tactics: accusing critics of being hypocrites, claiming foreign money drives environmental agendas and labelling activists as eco-terrorists or enemies of Canada among them. In place of true progress, we get consolidated political power and greater corporate profit and control. Enough already!

Climate Change: The Economics of and Prospects for a Global Deal

11/19/2007 4:30 PM Wong AuditoriumSir Nicholas Stern, Professor of Economics, London School of EconomicsDescription: From Nicholas Stern’s market perspective, climate change constitutes an “externality” that, like traffic grid lock in a city center, arises when some people’s actions affect the welfare of others, at no cost to the perpetrators. Simple price mechanisms can fix congestion, says Stern, but climate change, which he views as “the greatest market failure the world has ever seen,” requires unprecedented measures to contend with its potentially cataclysmic, long”term global impacts.

Stern is the author of an influential and provocative review prepared for the British government describing the economics of climate change and development. Here he outlines, in non”technical jargon, the key issues, choices and potential responses of a world facing warming.

Scientific modeling suggests that if nations continue on their present course, the Earth will move from CO2 levels of around 450 parts per million (ppm) today to over 800 ppm a century from now. That could bring a 5o C change, says Stern, accompanied by storms, droughts, and sea level rise, which would trigger massive human migration and “severe conflict.” While totting up the costs of such a scenario is nearly unimaginable, Stern has more of a handle on the “scale of damage” — disruptions to economic and social activity — a 3o C increase might inflict. This is the kind of increase that many climate models suggest will come if we manage to stabilize CO2levels at 550 ppm.

Stern argues that if we don’t act to rein in greenhouse gases to such a target, the costs to the global GDP will exceed 5% each year, forever. ( If the impacts of a 3o C increase have been underestimated, the costs might rise to 20% GDP, or more.) If nations think of this as “an insurance problem,” says Stern, they ought to be willing to invest 1%”2% of their current GDP in reducing emissions and achieving stabilization in the next 10″20 years. This is the timeframe societies have to put into play appropriate policies for carbon pricing, new technologies for conservation and non”carbon based energies. What’s needed, says Stern, is a global deal, a framework of understanding that guides all nations of the world. His six”point plan relies on rich nations acknowledging their obligation to reduce carbon emissions by greater amounts than developing nations; funding efforts to develop and share technologies, and to tackle deforestation; and monies to help needier nations adapt to change. Stern sees some evidence that the international community — perhaps even the U.S. _ is positively inclined toward cutting a global deal.

Previously, Stern was Head of the Government Economic Service. From 2003″2005, he was Second Permanent Secretary to Her Majesty’s Treasury and from 2004″2005, Director of Policy and Research for the Prime Minister’s Commission for Africa. From 2000″2003, Stern was World Bank Chief Economist and Senior Vice President, Development Economics. From 1994 until late 1999, he served as Chief Economist and Special Counsellor to the President, European Bank for Reconstruction and Development.

His most recent book Growth & Empowerment: Making Development Happen was published in April 2005. The Stern Review on the Economics of Climate Change was published in October 2006 (http://www.sternreview.org.uk). He has published more than 100 articles.
Nicholas Stern is a Fellow of the British Academy (July 1993), Foreign Honorary Membership of the American Academy of Arts and Sciences (1998). He received a B.A. from Cambridge University (Mathematics), and a D.Phil. from Oxford University (Economics).
Host(s): Office of the President, MIT Energy Initiative

In a move that surprised exactly no one, the Republican-dominated U.S. House of Representatives voted today for the tenth time to approve the construction of the Keystone XL pipeline. Following a short floor discussion that reiterated all the familiar arguments pro and con, the House voted 266-153 in favor of the project.

The vote took place only four days after the current session opened, rejecting pleas from some Democrats to give the matter more consideration. But it’s not like the result was ever in doubt; with an enhanced Republican majority in the House, it passed by an even bigger margin that in the previous votes.

“The only folks who think the first major act of Congress should be to force approval of the Keystone XL tar sands pipeline are those in the pocket of oil and gas billionaires,” said Sierra Club executive director Michael Brune. “That explains why 266 members of the House voted to try and do just that. Big polluters are getting the Congress they paid for, and they are now trying to make everyone else pay the price.”

On the Senate side, the Energy and Natural Resources Committee approved the pipeline by a vote of 13-9 and passed it on to the full Senate for a vote. Senator majority leader Mitch McConnell, who has said repeatedly that approving the pipeline would be his first priority in the new Congress, said that a cloture vote will take place Monday night. With 60 sponsors, the bill will easily clear that hurdle and go on for a guaranteed-to-pass vote, following its failure to pass the Senate in November by one vote. It will then be the first item that the new Congress sends to President Obama to sign, which he’s indicated lately that he would veto the bill.

Stirring up the rhetoric on the already heated issue, the Nebraska Supreme Court this morning failed to find in favor of local landowners trying to block the state from implementing the route chosen by TransCanada, the company building the pipeline. Obama has given as one of his reasons—pipeline supporters’ coordinated talking point today is that this was an “excuse” rather than an actual reason—that the Nebraska court case was pending. But it was far from the only reason he’s offered in recent weeks. The State Department review of the project is still pending and concerns about its environmental impacts remain. 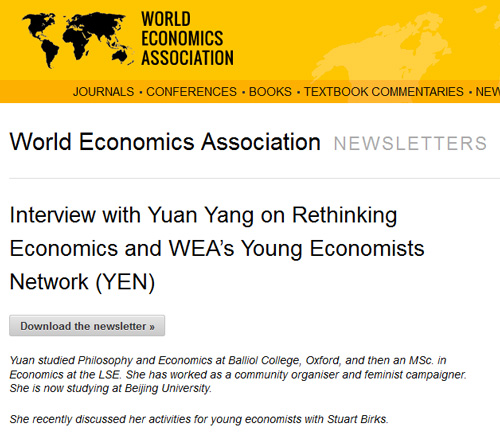 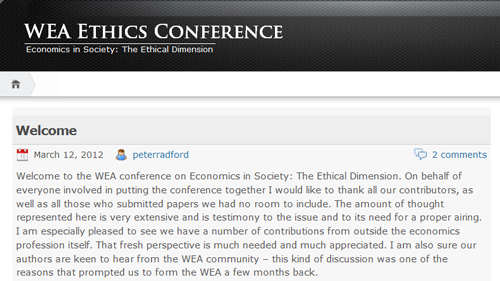 Welcome to the WEA conference on Economics in Society: The Ethical Dimension. On behalf of everyone involved in putting the conference together I would like to thank all our contributors, as well as all those who submitted papers we had no room to include. The amount of thought represented here is very extensive and is testimony to the issue and to its need for a proper airing. I am especially pleased to see we have a number of contributions from outside the economics profession itself. That fresh perspective is much needed and much appreciated. I am also sure our authors are keen to hear from the WEA community – this kind of discussion was one of the reasons that prompted us to form the WEA a few months back.

Welcome to the WEA Conference “Sustainability – Missing Points in the Development Dialogue” 2012.

Sustainability has many dimensions and is a challenge for both economists and other social scientists. The idea behind this online conference is to raise issues from and about fundamental perspectives, to broaden the dialogue through an articulation of alternative or complementary perspectives, and to provide policy advice. The focus is not just on so-called “tipping points,” but also on “missing points” in the sustainability dialogue.