NOTICE SOMETHING STRANGE?
What’s Happening to Our Weather?
WELCOME TO THE NEW NORMAL

A compilation of short clips from the documentary film Life and Debt. The clips focus on the effects of free trade policies in Jamaica. These clips are meant to illustrate basic points from a structural perspective.

The Next Big Gold Rush

The Arctic is home to one of the most hostile environments on Earth. Yet it is here in this seemingly barren and remote wilderness, that we are seeing the earliest and most extreme effects of global warming.

Countries are looking at all of the natural resources that sit under the Arctic Ocean — oil reserves — and it has become sort of the next big gold rush.

Published on Mar 26, 2014
Aboard the Arctic Sunrise, a team of Greenpeace activists are getting ready for a non-violent act of civil disobedience. Everyone knows the mission will be risky and dangerous. Their target is the Prirazlomnaya. It is now the first drilling rig ever located above the Arctic Circle. When the crew maneuvers the ship to within a mile of the drilling platform — their action begins. 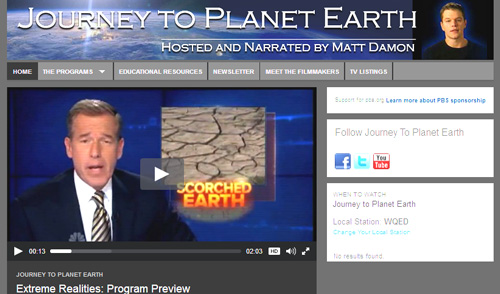 In the wake of these disasters, Extreme Realities addresses three fundamental questions: (1) are we merely experiencing once in a hundred year weather events or are they early warning signals of an altered reality – a new normal; (2) have we already reached a tipping point pushing our planet towards an environmental cliff; and (3) are there ways to mitigate or adapt to these newly emerging threats?

Hosted by Matt Damon, “Journey to Planet Earth” is a current PBS series that explores the fragile relationship between people and the world they inhabit. The series is designed to help viewers cope with the complexities of developing an agenda to deal with the most important environmental issues of the 21st century.

Through an interdisciplinary approach, these programs reach beyond the physical sciences and draw connections to politics, economics, sociology, and history.

The series is produced by Emmy Award-winning filmmakers Marilyn & Hal Weiner of Screenscope Films in association with South Carolina ETV.

Dr Jerry Schubel presents the emergence of a new commons that can be leveraged to solve the world’s wicked problems. He highlights the importance of a collaboration between science, art and design.

Published on Jan 15, 2014
Humans are the most creative and innovative species in the history of life on earth. Those qualities allowed our population to explode; extended and improved the quality of life of many, but not all; and compromised earth’s living infrastructure—our life support system. Jerry Schubel explores how that same creativity and innovation is the only way to reframe our relationship with earth and with those less fortunate and allow them to receive some of the same benefits we do—clean water, sanitary facilities, energy, adequate food and shelter.

Published on Jan 7, 2015
http://democracynow.org – In a closely watched press freedom case, New York Times investigative reporter James Risen was called to the witness stand Monday after a seven-year legal battle against the government’s attempts to subpoena him and force him to reveal his source. The hearing in Virginia took place ahead of the trial of former CIA officer Jeffrey Sterling, who is accused of giving Risen classified information which revealed a botched CIA plot to disrupt Iran’s nuclear program. It is unclear yet if Risen will be called to testify at Sterling’s trial. Without more information from Risen, Sterling’s defense attorney argues the case should be dismissed. We are joined by Matt Apuzzo, a colleague of Risen’s at The New York Times who is covering the case. During his previous stint with the Associated Press, Apuzzo and Adam Goldman won a Pulitzer Prize for their coverage of the NYPD’s Muslim surveillance program. The Department of Justice opened three separate investigations into leaks related to their reports.

MEES Conference 2015 – Our Common Wealth: Environmental Education is for Everyone 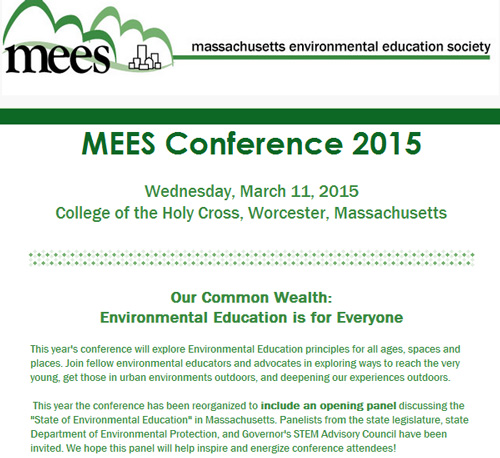