Environmental law has failed us all. As ecosystems collapse across the globe and the climate crisis intensifies, environmental agencies worldwide use their authority to permit the very harm that they are supposed to prevent. Growing numbers of citizens now realize they must act before it is too late. This book exposes what is wrong with environmental law and offers transformational change based on the public trust doctrine. An ancient and enduring principle, the trust doctrine asserts public property rights to crucial resources. Its core logic compels government, as trustee, to protect natural inheritance such as air and water for all humanity. Propelled by populist impulses and democratic imperatives, the public trust surfaces at epic times in history as a manifest human right. But until now it has lacked the precision necessary for citizens, government employees, legislators, and judges to fully safeguard the natural resources we rely on for survival and prosperity. The Nature’s Trust approach empowers citizens worldwide to protect their inalienable ecological rights for generations to come. 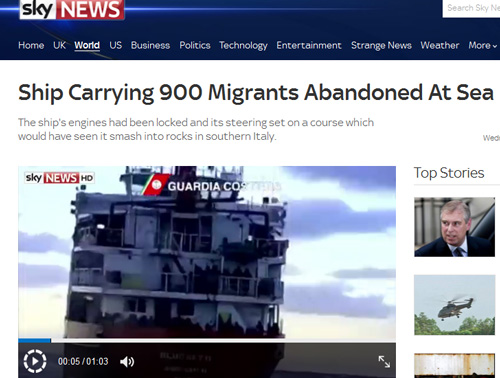 The ship’s engines had been locked and its steering set on a course which would have seen it smash into rocks in southern Italy.

Italy’s coastguard said they narrowly averted a “massacre” after a cargo ship was abandoned at sea with more than 900 Syrian refugees on board.

Officers said the Blue Sky M’s engines had been locked and its steering set on a course which would have seen it smash ashore in Italy’s Puglia region.

Two helicopters were scrambled overnight and six coastguard officers boarded the ship and managed to bring it under control just five miles from the rocky coastline.

“It was a real race against the clock,” said coastguard spokesman Filippo Marini.

“Unlocking the engines was a difficult and delicate operation, but they managed to do it.”