What If The World Can’t Cut Its Carbon Emissions? 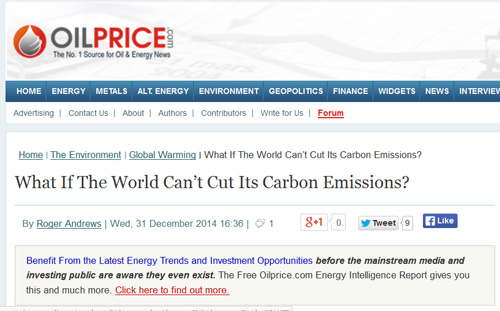 Benefit From the Latest Energy Trends and Investment Opportunities before the mainstream media and investing public are aware they even exist. The Free Oilprice.com Energy Intelligence Report gives you this and much more. Click here to find out more.

Many people, including more than a few prominent politicians, accept that global warming must be limited to no more than two degrees C above the pre-industrial mean, or a little more than one degree C above where we are now, to avoid dangerous interference with the Earth’s climate. Let’s assume these people are right, that the 2C threshold really does represent the climatic equivalent of a cliff and that bad things will happen if we drive off it.

So how do we apply the brakes?

According to the IPCC by limiting cumulative future global carbon emissions to no more than 500 gigatons, and even then we would have only a two-thirds chance of success:

To have a better than two-thirds chance of limiting warming to less than 2°C from pre-industrial levels the total cumulative carbon dioxide emission from all human sources since the start of the industrial era would need to be limited to about 1,000 gigatonnes of carbon. About half of this amount had already been emitted by 2011.

Here we will ignore the one-third chance of failure and use 500 gigatons as the “safe” emissions limit. Can we stay below it? Figure 1 summarizes the current position. The black line (data from EDGAR) shows progress, or lack thereof, in cutting global emissions since the United Nations Framework Convention on Climate Change (UNFCCC) started the ball rolling in 1992. The red line is a projection of the black line. The blue line, which intersects zero in 2117, amounts to 500 Gt of future carbon emissions. I assumed a linear decrease for simplicity but other pathways are of course possible: 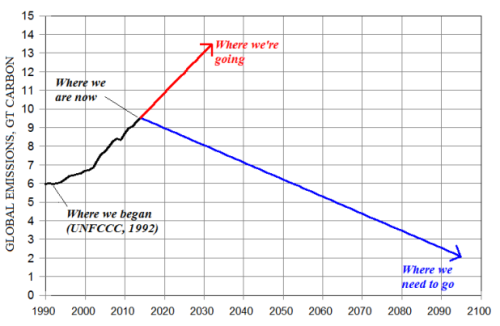 Obviously the world is going to have to reverse course in a hurry if it is to have any chance of keeping warming below the 2C danger threshold. What are the chances that it can? Let’s look at which countries the emissions are coming from and see what the prospects are.