Why scientists continue to be perplexed by how to define the outbreak that has killed 7,000.     December 29, 2014 |By Dina Fine Maron 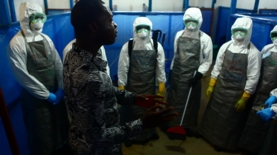 Credit: Morgana Wingard/Sarah Grile Kisses are at a premium in the capital of Liberia. Even a hug or a handshake between friends is often out of the question. That’s the new normal ever since Ebola began ravaging communities throughout Liberia, Sierra Leone and Guinea. For much of the past year, residents of these west African countries have wondered if daily life will ever be able to return to the way things once were. And at the heart of the matter is a scientific question: has Ebola now found a permanent foothold among humans? The answer, however, is not easy to suss out. In fact, it’s a guessing game. Even for top scientists.

In public health terminology the word used to describe this kind of health threat is “endemic.” The term describes any malady that routinely crops up without having to be reintroduced from an outside source—either imported from another country or another species. The flu, for example, is endemic in the U.S. because various strains reappear the following year without any trouble. Yet the many Ebola outbreaks of the past 40 years are not referred to as endemic because the original source of the infection in each case is widely believed to be an animal that somehow infected a human.

Changing the technical description of the current outbreak from epidemic to endemic is more than a matter of semantics. The difference between responding to an epidemic versus an endemic disease is as great as the difference between preparing for a sprint versus a marathon. A sprint requires a massive surge of effort after which the runner can recover. A marathon, like endemic Ebola, requires an entirely different mindset and extensive resources to go the distance. Failure to prepare for a marathon leaves a runner puffing shortly into the race. And failure to prepare for endemic Ebola results in a higher body count than might otherwise occur. But a premature shift to prepping for endemic Ebola could also result in a higher body count by crippling the short-term response; it would rob responders of the emergency beds and equipment needed to tamp down the massive viral surge still plaguing west Africa. Consequently, wary top health officials must draw up blueprints for the current crisis while eyeing the unpredictable road ahead.

When it comes to Ebola, “To say it is endemic is, in one sense, to admit failure,” says Christopher Dye, who serves as director of strategy in the office of the director general at the World Health Organization. “Our goal, and our expectation, is that we will eliminate infection from the human population,” he says. But there is no firm cutoff for a time period or series of symptoms that would demarcate the line between Ebola transmission as a perpetual threat or just a virus that is taking too long to extinguish.