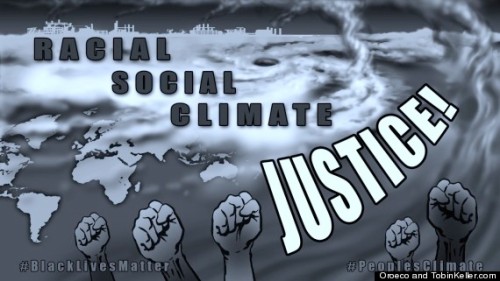 Climate change is not primarily an environmental issue.

It’s taken me a decade of working on energy and development in 20 countries to realize this. Yes, over half of Earth’s species are in danger of extinction from our current pace of climate disruption. But what makes the imperative to immediately act on climate most compelling is what a warmer world means for people, particularly people living in poverty and people of color. To live the dream that we are all created equal, and ensure #BlackLivesMatter as much as any others, we need to place solving climate at the forefront of our minds.

Climate change is the greatest racial and social justice issue of our time.

That’s not an opinion, that’s what the numbers tell us based on the best available science from thousands of the world’s top researchers. It can seem counterintuitive, but global warming is already contributing to extreme weather of all varieties: extended droughts, more intense flooding, record heat waves, historic blizzards and deadly hurricanes. Many scientists have documented how these extremes are already decreasing food production and disrupting water supplies, with much more expected to come. Add in sea level rise, expanded disease ranges, declining fisheries from acidifying oceans, and our propensity for violence linked to warmer temperatures and limited resources, and we have a recipe for humanitarian disaster beyond anything our civilization has known.

The billions of people most at risk from climate chaos are those with the least resources to adapt, who almost invariably are people of color. The Global Humanitarian Forum estimates that climate change is already causing over 300,000 deaths per year, with 99 percent of these deaths linked to poverty in the developing world. A separate DARA report commissioned by 20 governments estimates that climate and other pollution from fossil fuel use will cause over 100 million deaths by 2030; that’s more than WWI and WWII, combined. Nearly all these deaths will likely also be poor people of color, and billions more will survive to be trapped in deeper cycles of poverty. This “climate gap” of unequal impacts linked to race and poverty exists in America as well, displayed vividly in the racial disparity in Hurricane Katrina’s death and destruction, and connected to thousands of climate-migrants fleeing drought, disease and violence.