Secretary Kerry Delivers Remarks on Climate Change at the COP-20

U.S. Secretary of State John Kerry delivers remarks on climate change at the COP-20 in Lima, Peru on December 11, 2014.

Catholic bishops from around the world are calling for an end to fossil fuel use and increased efforts to secure a global climate treaty.

Catholics, they say, should engage with the process leading to a proposed new deal to be signed in Paris next year.

The statement is the first time that senior church figures from every continent have issued such a call.

Negotiators in Lima are currently trying to advance the outline text of an agreement at UN-led talks.

With 1.2bn people worldwide calling themselves Catholic, the church has considerable potential to influence public debate on any issue.

On climate change, some bishops have previously called for rapid decarbonisation and argued for moves to protect the most vulnerable.

But this is first time that such a global collection of senior priests have made such a call.

In their statement, the bishops say they want a “deepening of the discourse at the COP20 in Lima, to ensure concrete decisions are taken at COP21 to overcome the climate challenge and to set us on new sustainable pathways”.

Monsignor Salvador Piñeiro García-Calderón, Archbishop of Ayacucho, and president of the Peruvian Bishops’ Conference, said: “We bishops from Africa, Asia, Latin America and Europe have engaged in intense dialogue on the issue of climate change, because we can see it’s the poorest people who are impacted the most, despite the fact they’ve contributed the least to causing it.

The US secretary of state John Kerry will arrive in Lima today to push forward global climate negotiations, taking place in the city.

Mr Kerry is the most senior American official to attend the talks since President Obama went to Copenhagen in 2009 – an event that didn’t end particularly well.

The Secretary of State has long been the most engaged American politician on the issue of climate and environment and his attendance at these UN negotiations is being seen as further evidence that the US is determined to make up for the failures of Copenhagen in 2009 and deliver a strong agreement in Paris next year.

For once, the US is not being seen as the Great Satan of CO2.

Thanks to their joint initiative with China, the two countries are taking a bow as leaders of the fight against rising temperatures.

The change in atmosphere could be seen on the poker face of US special climate envoy Todd Stern, who in recent days has been a veritable ray of sunshine.

The way he sees it, the deal that is being negotiated here – and will likely be signed in Paris – is a truly historic event. 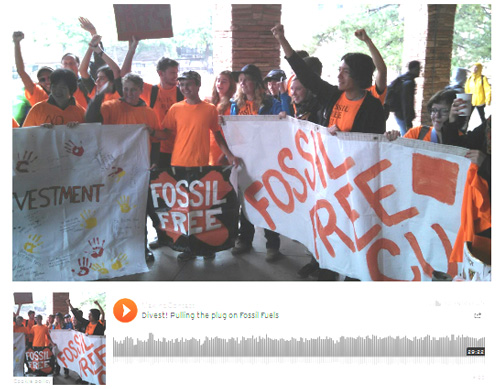 Fossil fuels are a trillion dollar industry but environmentalists say they have a plan to pull the plug on the industry: divestment. The campaign to get institutions to end their investments in oil, gas, and coal companies has won supporters around the US and abroad.

But is the strategy working? We hear from students in Boulder, Colorado who have been campaigning since 2012 and we hear about the close relationship between the oil industry and professional soccer.

Not For Sale started with a powerful vision: to see the end of modern-day slavery in this lifetime. Right now, millions of people around the world are exploited everyday. But because of people like you, the fight for freedom is gaining momentum.

Roxanne Dunbar-Ortiz: An Indigenous People’s History of the United States

Roxanne Dunbar-Ortiz, author of ‘An Indigenous Peoples’ History of the United States’, discusses growing up and getting involved in the radical movements of the 1960s

Author and historian Roxanne Dunbar Ortiz joins GRITtv to discuss how the history of genocide of Native peoples Effects all people of the US, even today. In Chew On This, Laura talks to Tom Goldtooth about today’s solutions to the problem – what does indigenous sustainable society look like? And the F Word with Laura Flanders.

(Visit: http://www.uctv.tv/) The 2014 Founders Symposium features top UC San Diego faculty presenting their latest research; including Matthew Alford of Scripps Institution of Oceanography on “Chasing Waves: Measuring Skyscraper-High Waves Beneath the Sea and Their Importance for Submarines, Coastal Ecosystems and Climate;” economist Richard Carson on “China: Consumption, CO2 and Climate Change; and Eugene Pawlak from the Dept. of Mechanical and Aerospace Engineering on “Turbulence: Chicken Soup for the Coral Reef Soul.” Also presenting are William Griswold of Computer Science and Engineering on “Pervasive Air-Quality Monitoring via the Crowd;” Dr. Razelle Kurzrock of the Moores Cancer Center on “Personalized Cancer Therapy: Promise and Challenge;” and Dr. Lucila Ohno-Machado, associate dean for Informatics and Technology on “Big Data: What it Means To You.” Series: “UC San Diego Founders’ Symposium” [1/2015] [Public Affairs] [Health and Medicine] [Humanities] [Show ID:
27753]

By not prosecuting those responsible for torture President Obama failed to uphold the International Convention on Torture, further his current Director of the Central Intelligence Agency, John Brennan was a intelligence official in the Bush Administration, further the heavily redacted report on torture does not include Abu Ghraib and Guantanamo says Michael Ratner, President Emeritus of the Center for Constitutional Rights

Is The World Really Ready For Nuclear Power?

Catalyst: Next Generation Nuclear – ” You can take out a coal-fired power station, you can put in a nuclear power station and you have something that has replaced coal. ”

Ever since Nuclear power was first realised, it has been a contentious issue. The bombs of Hiroshima and Nagasaki and the disasters of Chernobyl and Three Mile Island were pitched against the environment damaging and fast receding fossil fuels. But are new advances in Nuclear Power putting these long term fears to bed? The ABC Australia Catalyst team goes to find out.

Journeyman Pictures brings you highlights from the cutting-edge science series, ‘Catalyst’, produced by our long-term content partners at ABC Australia. Every day we’ll upload a new episode that takes you to the heart of the most intriguing and relevant science-related stories of the day, transforming your perspective of the issues shaping our world.