We cannot survive ‘business as usual’ because “If they carry out those business plans…the planet will simply break.” |EV & N – 170 | CCTV

Recorded on 9/15/2014 – Captured Live on Ustream at http://www.ustream.tv/channel/nothief…

Edward Snowden’s reaction to the RLA-2014

Edward Snowden’s thank you video to the Right Livelihood Award Foundation and people all over the world supporting him.

Owen Bennett-Jones and a panel of BBC correspondents investigate how the World Health Organisation and West African governments have responded to the Ebola crisis. What lessons have been learned?

The corporate lobbying network American Legislative Exchange Council, commonly known as Alec, is planning a new onslaught on a number of environmental protections next year when Republicans take control of Congress and a number of state legislatures.

The battle lines of Alec’s newest attack on environmental and climate measures will be formally unveiled on Wednesday, when the group begins three days of meetings in Washington DC.

Alec, described by its opponents as a corporate bill mill, has suffered an exodus of tech companies from its ranks recently because of its extreme positions – especially its promotion of climate denial.

Microsoft, Facebook, Yahoo and Yelp have all left Alec. Google flatly accused Alec of lying about climate change, when it severed its connections with the group last September.

Despite the setbacks, Alec remains focused on pushing back government regulation and blocking efforts to fight climate change in 2015, according to documents posted on its website in preparation for Wednesday’s gathering.

On the agenda for its environment and energy task force are draft model bills that will seek to disband the Environmental Protection Agency (EPA), expand offshore oil drilling, and weaken environmental protections for smog and other air pollutants, as well as roll back protections for endangered species.

The top priority appears to be rolling back the main pillar of Obama’s climate action plan: new rules to limit carbon pollution from power plants now being rolled out by the EPA.

Prof Stephen Hawking has been in partnership with Intel for over 25 years. Photograph: John Stillwell/PA Technology will eventually become self-aware and supersede humanity, says astrophysicist

The development of artificial intelligence could spell the end of the human race, Professor Stephen Hawking has said.

The famous astrophysicist said he believed technology would eventually become self-aware and supersede humanity, as it developed faster than biological evolution.

Hawking – who as a result of his motor neurone disease is almost totally paralysed – also spoke of how he had received a “life-changing upgrade” to the computer software that allows him to communicate.

Hawking now uses a system that incorporates predictive text, allowing him to type twice as quickly as before and send emails ten times faster.

“I was finding it very difficult to continue to communicate effectively and so do the things I love to do,” he told a press conference in London for the launch of the new Intel software platform.

“With the improvements made, I am now able to write much faster and that means I can continue to give lectures, write papers and books, and, of course, speak with my family and friends more easily.

‘Life on Earth is in peril. We have no future if we don’t go into space’ 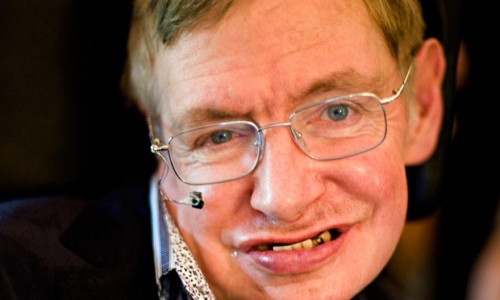 Robotic missions are much cheaper and may provide more scientific information, but they don’t catch the public imagination in the same way, and they don’t spread the human race into space, which I’m arguing should be our long-term strategy. If the human race is to continue for another million years, we will have to boldly go where no one has gone before. Life on Earth is at the ever-increasing risk of being wiped out by a disaster such as sudden global warming, nuclear war, a genetically engineered virus or other dangers … I think the human race has no future if it doesn’t go into space.

There is no future for us on Earth. If we survive as a human species, it’s inevitable – we are going to have to leave the planet. Now that’s an awful long time away, we hope, but at some point we have to make the leap, and we have to find other resources in the universe – and that starts now. To me it’s an insurance policy. It’s also all about exploration – it’s in our natural psyche to want to explore, to push the boundaries and take the next steps.

Tim Peake is set to fly on a mission to the International Space Station in November next year.

Only a tiny number of Earth’s six billion inhabitants are direct participants in human spaceflight. For the rest of us, the adventure is vicarious. At the end of the day, I ask myself whether the huge national commitment of technical talent to human spaceflight and the ever-present potential for the loss of precious human life are justifiable.

Obscenely expensive manned missions mean that practical, Earth-based science suffers, as does the genuinely valuable satellite research so essential to the way we live today. It is no wonder that the most articulate opposition to the Apollo missions came from Nobel scientists who objected to the way their budgets were bled in order to fund an ego trip to the Moon.

Gerard DeGroot, professor of modern history at St Andrews University, is author of Dark Side of the Moon: The Magnificent Madness of the American Lunar Quest.