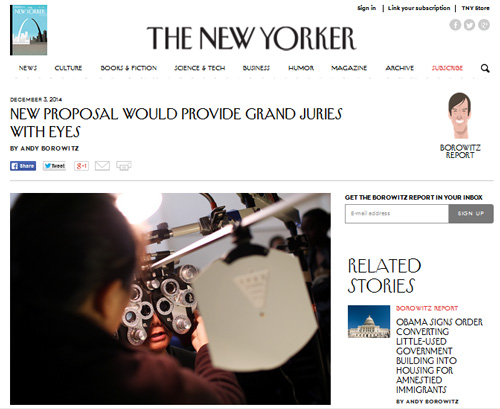 WASHINGTON (The Borowitz Report)—On the heels of an initiative to provide police departments with body cameras, there is growing support for a plan to supply grand-jury members with eyes, advocates for the plan said on Wednesday.

“Body cameras are an important part of the solution,” said Harland Dorrinson, who is lobbying Washington to equip grand juries with the sense of sight. “But I strongly believe that if you take video evidence and add eyes, the combination would be unstoppable.”

Some critics of Dorrinson’s proposal say that it does not go far enough, and that in order to process information sent from their eyes grand juries would also need to be fitted with working brains.

Published on Dec 4, 2014
http://democracynow.org – President Obama is reportedly preparing to nominate former Deputy Defense Secretary Ashton Carter to replace ousted Defense Secretary Chuck Hagel. A trained physicist, Carter has a long history at the Pentagon, where he once served as the chief arms buyer. In 2006, he made headlines when he backed a pre-emptive strike against North Korea if the country continued with plans to conduct a test launch of an intercontinental ballistic missile. He co-wrote a piece headlined “If Necessary, Strike and Destroy.” We speak to Alice Slater, New York director of the Nuclear Age Peace Foundation and a member of the Abolition 2000 coordinating committee.

Lyrics:
Blackbird singing in the dead of night
Take these broken wings and learn to fly
All your life
You were only waiting for this moment to arise

​Climate change is set to inflict “severe, widespread, and irreversible impacts” on people and the natural world unless carbon emissions are cut sharply and rapidly. IPCC at Lima Pre-Cop20

Without additional efforts to reduce GHG emissions , emissions  global mean surface temperature increases in 2100 from 3.7 to 4.8°C with ​a range to 7.8°C when including climate uncertainty. IPCC AR5 WG3.

The rapidity with which the human-caused positive forcing is being introduced has no known analog in Earth’s history.(J. Hansen )

FAQ: What is a land grab?

What is a land grab?

Responsible investment is an important part of fighting poverty. But big land deals are happening so quickly and on such a large scale that poor people are more vulnerable to the injustice of land grabbing than ever before.

So what does this mean for people living on the land?

They lose the land they rely on to grow food and feed their families. Their homes, jobs and livelihoods are taken from them – sometimes violently – and there is nothing they can do about it.

Why is there such a high demand for land?

High food prices and a demand for new fuels have both played a part. And a rising population makes land seem like a pretty safe bet for savvy investors.

From Honduras and Indonesia to Liberia and Sudan, land is being looted by investors of all shapes and sizes. Governments, food exporters, tourism providers, Wall Street speculators – the list goes on.

But if investors use the land to grow food, won’t it work out OK in the end?

Most investors intend to export the food they grow back to rich countries. Others will use it to meet huge biofuel targets for the developed world. They’re making the hunger problem much worse.

The World Bank Is Refereeing a Race to the Bottom

Instead of ranking countries by their “business friendliness,” the World Bank should rank corporations according to their social responsibility.

There has been considerable pushback on this ranking system from civil society groups around the world. One of the critics, the Oakland Institute, invited me to provide an alternative business perspective on the Doing Business report at an event last October at the World Bank.

My co-panelists gave first-hand testimony about how this ranking system has encouraged the trend of massive private investment in farmland in developing countries. As private corporations and wealthy investors have acquired millions of hectares through such “land grabs,” thousands of small-holder farmers and other rural residents have been displaced, disappeared, and even killed.

At the demand of the G8, the World Bank is now developing a new project—called “Benchmarking the Business of Agriculture”—to apply the Doing Business approach to agribusiness. To his credit, World Bank President Dr. Jim Yong Kim has acknowledged that large-scale land acquisitions threaten a way of life for thousands. But unfortunately little has changed on the ground, and the Bank staff’s response to our panel was dismissive at best.

The annual Doing Business report, now in its 13th year, remains very influential. Countries have often implemented so-called reforms solely to move up in the ranking. As the chair of the board of Ben & Jerry’s corporation, I’ve seen firsthand how a high-road approach to environmental and labor standards can be good for people and the planet—as well as the bottom line.