School of Earth and Environment 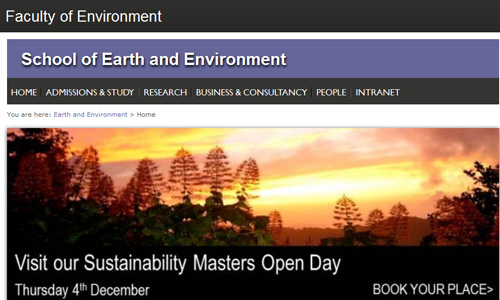 I have sometimes been asked “if you had a prime time TV advertising slot to promote Transition, what would you put on it?” This is a good time to ask that, as our TV channels pour out relentless TV adverts in the run-up to that special time of year when the UK gets set to shell out £74.3bn it can ill afford on its credit cards to buy stuff, half of which will be in landfill by the end of the year.

In this post we’ll explore that, as part of our theme of ‘Less is More’. The questions that underpin this month are:

I thought it might be fun, for this December blog, to put on our Transition glasses, and have a look at the various Christmas adverts being put out by the UK stores, and then to have a go at suggesting what the Transition Christmas ad might look like that might fill our one minute airtime.

Resilience.org is both an information clearinghouse and a network of action-oriented groups. Our focus is on building community resilience in a world of multiple emerging challenges: the decline of cheap energy, the depletion of critical resources like water, complex environmental crises like climate change and biodiversity loss, and the social and economic issues which are linked to these. We like to think of the site as a community library with space to read and think, but also as a vibrant café in which to meet people, discuss ideas and projects, and pick up and share tips on how to build the resilience of your community, your household, or yourself.

Resilience is a rich and complex concept. It has roots in systems theory, and it has a variety of interpretations and applications including for ecosystems management, disaster preparedness, and even community planning. Our interpretation is based on the work of the Resilience Alliance, the leading scholarly body working on the resilience of social-ecological systems. In that field, resilience is commonly defined as the capacity of a system to absorb disturbance and re-organize while undergoing change so as to still retain essentially the same function, structure, identity, and feedbacks.

While the oil and gas industry likes to claim that fracking is not an especially water intensive process, a new report has found that there are more than 250 wells across the country that each require anywhere from 10 to 25 million gallons of water.

The American Petroleum Institute suggests that the typical fracked well uses “the equivalent of the volume of three to six Olympic sized swimming pools,” which works out to 2-4 million gallons of water.

But using data reported by the industry itself and available on the FracFocus.org website, Environmental Working Group has determined that there are at least 261 wells in eight states that used an average of 12.7 million gallons of water, adding up to a total of 3.3 billion gallons, between 2010 and 2013. Fourteen wells used over 20 million gallons each in that time period (see chart below).

According to EWG, some two-thirds of these water-hogging wells are in drought-stricken areas. Many parts of Texas, for instance, are suffering through a severe and prolonged drought, yet the Lone Star State has by far the most of what EWG calls “monster wells” with 149. And 137 of those were found to be in abnormally dry to exceptional drought areas.

Texas also has the dubious distinction of having the most wells using fresh water in the fracking process. In 2011 alone, more than 21 billion gallons of fresh water were used for fracking Texas wells. Increased pumping by companies seeking to extract the oil and gas in the Eagle Ford shale formation, meanwhile, has been cited as a major cause of the state’s rapidly declining groundwater levels.

The exploitation of Canada’s tar sands is more than just an environmental catastrophe, writes Gregory McGann. It’s also an turning into an economic disaster, with massive investments at risk as falling oil prices leave the tar sands stranded.

92% of future oil sands production will only viable if oil prices are $95 per barrel. However, prices stand at only $85, so producers are losing money for every barrel of oil they sell.

One of the most destructive forms of oil production is financially nonsensical and faces total collapse, according to a new report by the Carbon Tracker Initiative (CTI), Oil Sands: Fact sheets.

The report suggests that that investors are being misled about the economic viability of oil sands production, which is doing irreparable damage to the pristine boreal forests of northwestern Canada.

CTI, an environmentally-aware financial analysis company, argues that future oil sands projects, besides being environmentally disastrous, are also financially catastrophic and are leading their investors towards serious loss.

Despite the recent dramatic fall in oil prices, the companies have failed to factor in the risk of further falls in prices. Oil sands projects, with their high productions costs, are especially vulnerable as oil price declines can easily wipe out all their profitability.

“The cost pressures facing the oil industry show few signs of abating”, states the report – yet oil companies simply refuse to recognize them.

Published on Aug 11, 2014
Higher Education has an enormous role in the protection and study of the environment, and one that begins before even considering students. Professor Roberts, giving a small sample of the material that she will present in her upcoming lectures, discusses this role.

Carolyn Roberts is the first Frank Jackson Professor of the Environment at Gresham College. Information on her ongoing series of free public lectures is available here: http://www.gresham.ac.uk/green-comple…

More information on Professor Roberts can be found here: http://www.gresham.ac.uk/professors-a…

What is Sustainability? Economics, Society and the Environment – Professor Carolyn Roberts

Published on Aug 11, 2014
Professor Roberts introduces her inaugural lecture series as the Frank Jackson Gresham Professor of the Environment by answering the question; what is sustainability?

Carolyn Roberts is the first Frank Jackson Professor of the Environment at Gresham College. Information on her ongoing series of free public lectures is available here: http://www.gresham.ac.uk/green-comple…

More information on Professor Roberts can be found here: http://www.gresham.ac.uk/professors-a…

Tim Jackson currently serves as the economics commissioner on the UK government’s Sustainable Development Commission and is director of RESOLVE — the Research group on Lifestyles, Values and Environment. After five years as Senior Researcher at the Stockholm Environment Institute, he bcame the Professor of Sustainable Development at University of Surrey, and was the first person to hold that title at a UK university. He founded RESOLVE in May 2006 as an nter-disciplinary collaborationacross four areas — CES, psychology, sociology and economics — aiming to develop an understanding of the links between lifestyle, societal values and the environment.

He is also the author of the influential book Propserity Without Growth. He serves as chair to the ‘New Energy Solutions’ Advisory Board for Danish investment company BankInvest and is associate researcher on a Templeton Foundation project on ‘The Pursuit of Happiness.’ Tim is also an award-winning playwright, and his environmental drama The Cry of the Bittern won a Public Awareness of Science Drama Award in 1998. His most recent play, Variations, won the 2007 Grand Prix Marulic and is longlisted for the 2008 Sony Drama award.

The transpolar drift (purple arrows) is a dominant circulation feature in the Arctic Ocean that carries freshwater runoff (red arrows) from rivers in Russia across the North Pole and south towards Greenland. Under changing atmospheric conditions, emergent circulation patterns (blue arrows) drive freshwater runoff east towards Canada, resulting in freshening of Arctic water in the Canada Basin.
Retrieved from: http://www.nasa.gov/multimedia/videog…

PASADENA, Calif. – A new NASA and University of Washington study allays concerns that melting Arctic sea ice could be increasing the amount of freshwater in the Arctic enough to have an impact on the global “ocean conveyor belt” that redistributes heat around our planet.

Lead author and oceanographer Jamie Morison of the University of Washington’s Applied Physics Laboratory in Seattle, and his team, detected a previously unknown redistribution of freshwater during the past decade from the Eurasian half of the Arctic Ocean to the Canadian half. Yet despite the redistribution, they found no change in the net amount of freshwater in the Arctic that might signal a change in the conveyor belt.

The team attributes the redistribution to an eastward shift in the path of Russian runoff through the Arctic Ocean, which is tied to an increase in the strength of the Northern Hemisphere’s west-to-east atmospheric circulation, known as the Arctic Oscillation. The resulting counterclockwise winds changed the direction of ocean circulation, diverting upper-ocean freshwater from Russian rivers away from the Arctic’s Eurasian Basin, between Russia and Greenland, to the Beaufort Sea in the Canada Basin bordered by the United States and Canada. The stronger Arctic Oscillation is associated with two decades of reduced atmospheric pressure over the Russian side of the Arctic. Results of the NASA- and National Science Foundation-funded study are published Jan. 5 in the journal Nature.

Between 2003 and 2008, the resulting redistribution of freshwater was equivalent to adding 10 feet (3 meters) of freshwater over the central Beaufort Sea.

The freshwater changes were seen between 2005 and 2008 by combining ocean bottom pressure, or mass, data from NASA’s Gravity Recovery and Climate Experiment satellites with ocean height data from NASA’s ICESat satellite. By calculating the difference between the two sets of measurements, the team was able to map changes in freshwater content over the entire Arctic Ocean, including regions where direct water sample measurements are not available.

“Knowing the pathways of freshwater is important to understanding global climate because freshwater protects sea ice by helping create a strongly stratified cold layer between the ice and warmer, saltier water below that comes into the Arctic from the Atlantic Ocean,” said Morison. “The reduction in freshwater entering the Eurasian Basin resulting from the Arctic Oscillation change could contribute to sea ice declines in that part of the Arctic.”

Our newest Gresham Professor give a taste of the theme’s topics and ideas that she will be exploring in her lecture series for the academic year 2014-15.
Gresham College is delighted to welcome Professor Carolyn Roberts as our first Frank Jackson Professor of the Environment.