Do you have a question for Yale’s president? Readers are invited to submit questions or topics to yam or Yale Alumni Magazine, PO Box 1905, New Haven, CT 06509-1905.

The Yale Alumni Magazine regularly holds a conversation with Yale president Peter Salovey ’86PhD to provide a forum in which alumni can learn his views. (Interviews are conducted both in person and by e-mail and condensed for print.)

In this issue, Salovey answers questions about Yale’s response to a student request for divestment from fossil fuel companies that are failing to improve their climate footprint.

Y: The student group Fossil Free Yale asked Yale to divest from fossil fuel companies, a request turned down this fall by the Yale Corporation Committee on Investor Responsibility. [The Corporation is Yale’s board of
trustees.] Yale divested from companies doing business in South Africa and Sudan. Why not this?

S: The Corporation committee applies the guidelines laid out in The Ethical Investor, which was written by Yale Law School professor John Simon [’53LLB] and colleagues, and adopted by the Corporation in 1972. The committee agreed that the problem of climate change caused by greenhouse gas emissions represents grave danger to the future of humanity. But it concluded that this case was different from that of South Africa and Sudan. Applying principles of The Ethical Investor, it reasoned that focusing on fossil fuel suppliers ignores all of the other sectors that also cause carbon emissions. Instead of divesting, the Corporation committee urged the Advisory Committee on Investor Responsibility to support well-constructed shareholder resolutions on climate change at companies more broadly, and established guidance for that. And it noted that there are many things the university can do to reduce our own greenhouse gas emissions and to impact climate change more generally as part of Yale’s core mission.

In August, President Peter Salovey ’86PhD announced several new initiatives in the name of sustainability and addressing climate change. He also announced that Yale had decided against a move broadly supported by students—divestment of fossil fuel assets from the university’s endowment.

The initiatives include $21 million for energy conservation and greenhouse gas reduction, 350,000 square feet of solar panels on the West Campus, and a task force to examine the efficacy of an internal carbon-pricing mechanism for units of the university. (For more, see Q&A: Peter Salovey.) Salovey said Yale will also support “reasonable” shareholder resolutions on climate change, and Chief Investment Officer David Swensen ’80PhD has directed Yale’s external endowment managers to consider the effect of climate change when making investment decisions. 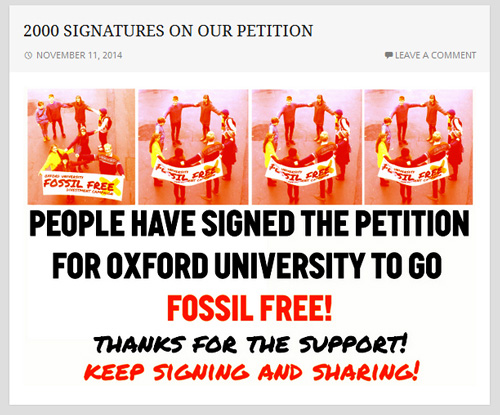 Oxford students celebrated this huge boost in support for divestment by touring Oxford colleges and landmark. This has come after the University extended a consultation [5] on fossil fuel divestment, due to end this week (November 14th).

The Fossil Free campaign submitted a report [6] to this consultation detailing its recommendations for the University, including a call to cut all direct investments in coal and tar sands oil and also to establish clear targets to move its indirect investments away from carbon-intensive assets and into low-carbon alternatives, including renewable energy.

Supporters of the student Fossil Free campaign include academics such as Lord Professor Robert May (ex-Chief Scientific Advisor to the Government), Emeritus Professor of International Relations Avi Shlaim and Professor Gordon Clark (Director of the Smith School and Fellow of the British Academy). High-profile alumni such as George Monbiot, Kumi Naidoo, Polly Toynbee and Ken Loach have also given their support.

Professor J. Doyne Farmer, Co-Director of Complexity Economics at the Institute for New Economic Thinking at the Oxford Martin School

“Science makes it clear that use of fossil fuels needs to stop as soon as possible. It is technologically feasible to replace fossil fuels in a short time if we only resolve to do so. Oxford University should show leadership by divesting from fossil fuel companies and supporting alternatives, and encouraging others to follow.”

For more information and updates check out our website here:
http://oxfordunifossilfree.wordpress….

Oxford: Wake Up to Divestment!

We’ve reached 2000 supporters on our petitions! Thank you everyone, keep sharing and signing! 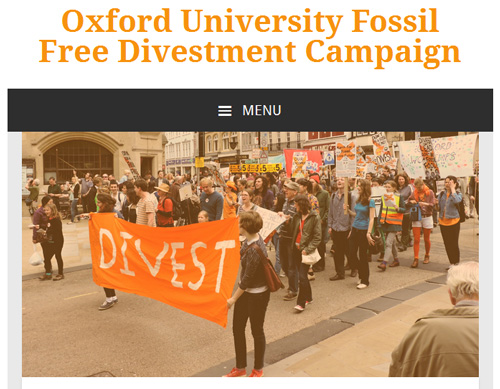 About the Oxford University campaign:

Building upon student activity during Trinity term 2013, the OUSU Environment and Ethics Campaign has adopted fossil fuel divestment as its main project.

The primary aim of the divestment project is to remove the fossil fuel industry from the University’s investment portfolio.

The level of interest expressed by the student body has so far been exceptional, with a committed core group having formed, and around 450 students signing onto the OUSU E&E mailing list at Fresher’s Fair.

We believe that any investment in fossil fuel companies is currently not socially responsible. Additionally, fossil fuel assets are overvalued, potentially threatening part of University’s investment portfolio with devaluation. As a result, we recommend the following:

For more information on what divestment entails, click here!

The Oxford University Fossil Free campaign meets every Wednesday at 5pm in the OUSU building.

For more information or to get involved, email eande.chair 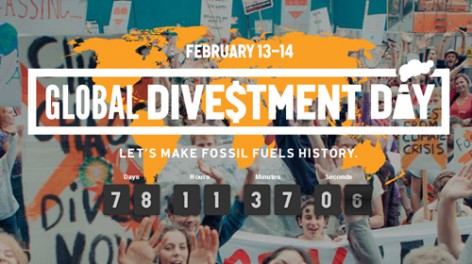 This is a big day for our campaign. After over a year of campaigning, we have over 2000 signatories on our petition, as well as over 100 academics and nearly 300 alumni. We also have the support of 28 student common rooms representing over 8200 students.

Tomorrow the University of Oxford committee considering fossil fuel divestment are meeting to discuss the outcomes of the recent university wide consultation. What they conclude tomorrow will go forward to the University Congress as their official recommendation and will have a massive influence on whether or not the university will divest.

We have high hopes for this meeting. We’ll be outside cheering them on tomorrow, but if you’re not in Oxford, please could you tweet today to show your support:

Oxford City Council and the Dioscese of Oxford have voted to divest, we hope the University will be the next!

Beyond Oxford on Feb 13 – 14 there is going to be global action on divestment. People across the globe will take collective action and demand institutions do what is necessary to avoid dangerous climate change by divesting from fossil fuels.

Individuals will close their accounts with banks and pension funds investing in climate chaos. University students will hold flash-mobs, vigils, occupations, sit-ins and rallies calling upon their endowments to invest in a liveable future. Faith leaders and people living on the front-line of climate change will band together to urge their communities to divest from climate destruction. In financial capitals, people will gather for colourful rallies calling on investors to break up with the fossil fuel industry and sever their ties once and for all.

An ecological approach to promoting population mental health and well-being–a response to the challenge of climate change. 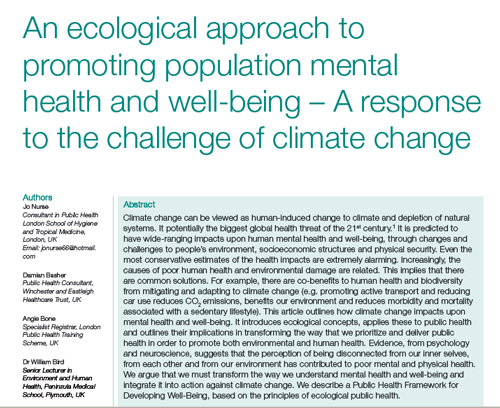 Climate change can be viewed as human-induced change to climate and depletion of natural systems. It potentially the biggest global health threat of the 21st century. It is predicted to have wide-ranging impacts upon human mental health and well-being, through changes and challenges to people’s environment, socioeconomic structures and physical security. Even the most conservative estimates of the health impacts are extremely alarming. Increasingly, the causes of poor human health and environmental damage are related. This implies that there are common solutions. For example, there are co-benefits to human health and biodiversity from mitigating and adapting to climate change (e.g. promoting active transport and reducing car use reduces CO2 emissions, benefits our environment and reduces morbidity and mortality associated with a sedentary lifestyle). This article outlines how climate change impacts upon mental health and well-being. It introduces ecological concepts, applies these to public health and outlines their implications in transforming the way that we prioritize and deliver public health in order to promote both environmental and human health. Evidence, from psychology and neuroscience, suggests that the perception of being disconnected from our inner selves, from each other and from our environment has contributed to poor mental and physical health. We argue that we must transform the way we understand mental health and well-being and integrate it into action against climate change. We describe a Public Health Framework for Developing Well-Being, based on the principles of ecological public health.

Above, Skip Pruss served as Michigan Governor Jennifer Granholm’s Special Advisor for Renewable Energy and the Environment, Michigan’s Chief Energy Officer, and Chair of the Great Lakes Offshore Wind Council. He is co-founder and principal of 5 Lakes Energy.

Predicting the future or new energy used to be hard. Now, thanks to the Energy Information Agency, and a host of fossil fuel industry experts, more skillful predictions can be made of renewable energy deployment.
The technique is, you take whatever they say for renewable energy output, multiply the amount by 20, cut the deployment time by half, and there’s your ballpark number.”