banking culture that implicitly puts financial gain above all else fuels greed and dishonesty and makes bankers more likely to cheat, according to the findings of a scientific study.

Researchers in Switzerland studied bank workers and other professionals in experiments in which they won more money if they cheated, and found that bankers were more dishonest when they were made particularly aware of their professional role.

When bank employees were primed to think less about their profession and more about normal life, however, they were less inclined to dishonesty.

A Future of Floods and Droughts as Climate Changes

A Future of Floods and Droughts as Climate Changes

Earth’s Rate Of Global Warming Is 400,000 Hiroshima Bombs A Day

Conveying abstract or hard-to-visualize ideas is always a challenge. That’s a core reason why the best communicators have always used metaphors.

As Aristotle wrote in his classic work Poetics, “the greatest thing by far is to be a master of metaphor.”

How can one convey the Earth’s staggering rate of heat build up from human-caused global warming — 250 trillion Watts (Joules per second)? The analogy to the energy released by the Hiroshima bomb has been used in recent years by a number of scientists, such as NOAA oceanographer John Lyman, and Mike Sandiford, Director of the Melbourne Energy Institute. In his TED talk Climatologist James Hansen explained the current rate of increase in global warming is:

“… equivalent to exploding 400,000 Hiroshima atomic bombs per day, 365 days per year. That’s how much extra energy Earth is gaining each day.”

That comes out to more than four Hiroshima bombs a second, which is a metric Skeptical Science has turned into a widget. I prefer the 400,000 Hiroshimas per day metric simply because the heat imbalance is occurring over a very large area, which four Hiroshimas don’t do justice to.

Some climate scientists disagree with those scientists (and others) who use this metric “because climate change is nothing like atom bombs” and “my problem is that the association of death and destruction is also easy to grasp,” as Dr. Doug McNeall of the UK Met Office has tweeted.

Metaphors are not literal — by design — so if you don’t like non-literal comparisons, you won’t like metaphors. I have argued at great length that one of the major failings of science communication is the failure to use figurative language. For what it’s worth, Aristotle believed, “To be a master of metaphor is a sign of genius, since a good metaphor implies intuitive perception of the similarity in dissimilars.” 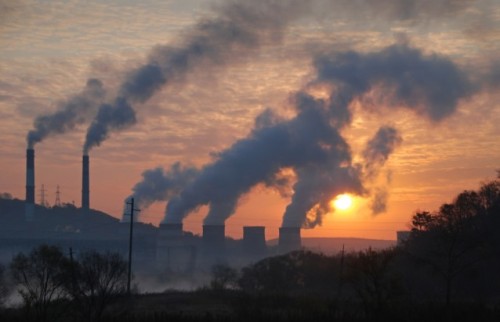 Organizations that actively block efforts to address climate change are funded by a large network of conservative donors to the tune of nearly $1 billion a year, according to the first in-depth study into the dark money that fuels the denial effort.

The study, published Friday in the journal Climatic Change, analyzed the income of 91 think tanks, advocacy groups, and industry associations, funded by 140 different foundations, that work to oppose action on climate change. The study’s author, Robert Brulle, refers to these organizations as the climate change counter-movement, and concludes that their outsized influence “has not only played a major role in confounding public understanding of climate science, but also successfully delayed meaningful government policy actions to address the issue.”

“It is not just a couple of rogue individuals doing this,” Brulle told the Guardian. “This is a large-scale political effort.”

From 2003 to 2010, the organizations had a total income of more than $7 billion, averaging out to over $900 million per year. Over the eight year span, their funding has increased by 13 percent and in 2010, total funding for the organizations was nearly $1.2 billion. An important caveat, as Brulle notes, is that many of the organizations are multi-purpose, so not all of the income was devoted to anti-climate change initiatives.

Brulle defines the climate change counter-movement as the organized effort to prevent policies that will limit the carbon pollution emissions that drive man-made climate change. Their efforts cover a range of activities, from lobbying to political contributions to media campaigns that attempt to discredit the scientific consensus around global warming.

The 91 groups include trade associations, think tanks, and advocacy organizations. The vast majority of the groups — 78 percent — were registered as charitable organizations and enjoyed considerable tax breaks.

The American Enterprise Institute (AEI) and the Heritage Foundation, two of the best-known conservative think tanks in the U.S., were also among the top recipients of funding. AEI received 16 percent of the total grants that were made to organizations active in the climate change counter-movement and Heritage was close behind, receiving 14 percent of total grants.

The largest and most consistent funders of organizations leading the charge on climate change denial are a number of well-known conservative foundations, such as the Searle Freedom Trust, the John William Pope Foundation, the Howard Charitable Foundation and the Sarah Scaife Foundation.

A key shift Brulle uncovered is that traditionally high-profile funders of climate denial, such as the Koch brothers and ExxonMobil, have moved away from publicly funding organizations that oppose action on climate change. The single-largest funders are the combined foundations Donors Trust/Donors Capital Fund, providing more than $78 million in funding to the groups over the eight year span. These donor directed foundations make grants on behalf of an individual or corporation, thereby funding their preferred causes while keeping their identity a secret. As a result, writes Brulle, “these two philanthropic organizations form a black box that conceals the identity of contributors to various CCCM organizations.”

AKA “How To Avoid Being Fooled at the Supermarket” This excellent British documentary details a number of food deceptions and flat out lies used in supermarkets and food production to make foods look and taste better and fresher than it really is.

Some scenes in the video may be disturbing to some viewers with some mild scenes of animal cruelty.

Watch Part 1&2 here: http://www.chinesehealthandfitness.co…
AKA “How To Avoid Being Fooled at the Supermarket” This excellent British documentary details a number of food deceptions and flat out lies used in supermarkets and food production to make foods look and taste better and fresher than it really is.

Some scenes in the video may be disturbing to some viewers with some mild scenes of animal cruelty.

This is Fed Up! Genetic Engineering, Industrial Agriculture and Sustainable Alternatives. Fed Up was released in 2002 by Wholesome Goodness Productions. More than a decade later, it still remains relevant. Most of the statistics are worse now and we are starting to see the rise of insect resistance to plants engineered to produce their own pesticides. There is still woefully little research available on long term ingestion of GMO foods and most foods in the US still are not labeled.

Description: Using hilarious and disturbing archival footage (from archive.org) and featuring interviews with farmers, scientists, government officials and activists, FED UP! presents an entertaining, informative and compelling overview of our current food production system from the Green Revolution to the Biotech Revolution and what we can do about it. FED UP! explores the unintentional effects of pesticides, the resistance of biotechnology companies to food labeling and the links between government officials and major biotechnology and chemical companies.

FED UP! answers many questions regarding genetic engineering, the Green Revolution, genetic pollution and modern pesticides through interviews with Marc Lappé and Britt Bailey from the Center for Ethics and Toxics, Peter Rosset and Anuradha Mittal from Food First, Vandana Shiva from the Research Center for Science, Technology and Ecology, Ignacio Chapela from UC Berkeley’s Department of Environmental Science, Policy and Management, Martina McGloughlin, Director of UC Davis’ Biotechnology Program and many others.FED UP! also introduces us to local Bay Area organic farmers from Purisima Greens Farm and Live Power Community Farm, presenting community supported agriculture and small- scale organic farming as real alternatives to agribusiness and industrial food.

I just watched the movie Cowspiracy. I liked it a lot. I recommend it to you.

That might surprise you …the film is anti-beef and ends up anti-animal eating in general.

It’s got some flaws. Although the film is from 2014, it’s working from some old, somewhat discredited data as regards grass-fed beef …but on the whole it really does a good job.

It’s especially good at pointing out the confusion that any sane person experiences when trying to look into factory farming and the mega-agro-industry. I really can relate to that from both sides of the fence.

It compares “apples to oranges” only briefly (although prominently) but the 90 minute running-time is worthy of your attention and efforts like this should be encouraged by anyone who loves both the food and the planet.

You may agree or disagree with its conclusions …but you won’t consider it a waste of your time. In fact, I think you’ll join me in welcoming a good, strong, young voice to the debate.

Eat less meat …raise more hell! Go get the film and watch it.