Bioneers is inspiring a shift to live on Earth in ways that honor the web of life, each other, and future generations. The annual conference brings together people from all walks of life to connect and envision and develop a brighter future.

Please join us at the Bioneers National Conference each October, and regional Bioneers Resilient Community Network gatherings held nationwide throughout the year.

For more information on the Bioneers Annual Conference, please visit http://conference.bioneers…. and stay in touch via Facebook

Naomi Klein – This Changes Everything: Capitalism vs. the Climate

Irving K. Barber Learning Centre Lecture presented by the Vancouver Institute. Webcast sponsored by the Irving K. Barber Learning Centre. Naomi Klein is the author of the critically acclaimed #1 international bestsellers, The Shock Doctrine: The Rise of Disaster Capitalism and No Logo: Taking Aim at the Brand Bullies which have each been translated into more than 30 languages. She is a contributing editor for Harper’s Magazine, a reporter for Rolling Stone, and a syndicated columnist for The Nation and The Guardian.

Naomi is a member of the board of directors for 350.org, a global grassroots movement to solve the climate crisis. Her new book is This Changes Everything: Capitalism vs. The Climate (September, 2014). This lecture is co-sponsored by the Canadian Centre for Policy Alternatives, 350.org and Green College.

Naomi Klein – This Changes Everything | Bioneers

Published on Nov 5, 2014
The award-winning Canadian journalist, international activist and best-selling author (The Shock Doctrine, No Logo) depicts climate change as more than an “issue.” It’s a civilizational wake-up call delivered in the language of fires, floods, storms and droughts. It demands that we challenge the dominant economic policies of deregulated capitalism and endless resource extraction. Climate change is also the most powerful weapon in the fight for equality and social justice, and real solutions are emerging from the rubble of our failing systems.

This speech was given at the 2014 Bioneers Annual Conference.

Terry Tempest Williams – A Love That is Wild | Bioneers

Published on Nov 5, 2014
What might a different kind of power look and feel like, and can power be redistributed equitably, even beyond our own species Conservationist, activist, and one of the nation’s most beloved and acclaimed authors, Terry Tempest Williams has been called “a citizen
writer” who speaks eloquently for an ethical stance toward life, showing how environmental issues are social issues that become matters of justice. A scholar at the University of Utah and Dartmouth, she has been equally at home camping in the wilderness and being arrested for civil disobedience.

Published on Nov 12, 2014
In the absence of federal climate leadership, California has been a crucial player in developing and implementing a broad suite of clean energy and low-carbon incentives and policies, while maintaining a fairly robust economy and green jobs creation. Tom Hayden outlines just how far down the path California is, how the state’s influence is being felt nationally and globally, and where we can go from here. Hayden, one of the leading figures of the student, civil rights, anti-war and environmental movements of the 1960s, went on to serve 18 years in the California legislature, where he chaired labor, higher education and natural resources committees. Director of the Peace and Justice Resource Center, he continues to be a leading voice for peace.

This speech was given at the California Climate Leadership Intensive, which was hosted by Bioneers as a supplement to the Bioneers 2014 Annual Conference.

Published on Nov 12, 2014
What will it take for people to move beyond ideology towards a comprehensive solution to the climate crisis? Drawing on the historical lead-up to the New Deal, Tom Hayden pulls from the public and the personal to sketch a new story for our time.

Tom Hayden is one of the leading figures of the student, civil rights, anti-war and environmental movements of the 1960s, went on to serve 18 years in the California legislature, where he chaired labor, higher education and natural resources committees. Director of the Peace and Justice Resource Center, he continues to be a leading voice for peace.

This speech was given at the California Climate Leadership Intensive, hosted by Bioneers as a supplement to the 2014 Bioneers National Conference.

To experience talks like this, please join us at the Bioneers National Conference each October, and regional Bioneers Resilient Community Network gatherings held nationwide throughout the year. 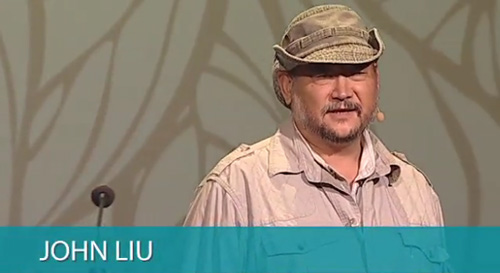 About this Talk
Filmmaker John Liu, who grew up in Bloomington, exudes an Indiana Jones-like quality as he uncovers the hidden treasures in ecosystems around the world. With stunning footage, Liu chronicles the transformation of China’s denuded Loess Plateau. His entrancing filmwork illustrates that restoring soil fertility can restore the hydrological cycle, a process that was disrupted by thousands of years of slash-and-burn agriculture and overgrazing. The intervention made by these communities not only revitalized the soil, water and air, but also brought rise to higher rates of education. Liu maintains that healthy ecosystem function is a superior measure of economic health as opposed to our current flawed standard – the rate at which we produce and consume manufactured goods.

In Hawaii, two agribusiness giants are suing Maui County over a new law banning the cultivation of genetically modified crops. Monsanto and Dow are asking a federal court to block the law, which was passed as a ballot initiative earlier this month. It imposes a moratorium on cultivating GMO crops until they are proved to be safe.

On Thursday, anti-poverty campaigners with the group Oxfam donned the masks of Obama and other world leaders as they called for the leaders at the G20 summit to take action against global wealth inequality. Oxfam Australia chief executive Helen Szoke said the gap between rich and poor is increasing.

Helen Szoke: “What we see are that many countries in the world are not getting the benefits of the profits that are gleaned, for example, by multinational companies. The G20 are in a position to make decisions around global tax reforms. There’s already been recognition that we have to deal with the issue of tax havens. Now, this is just one of the many things that can be done to actually ensure that we continue to lift people out of poverty.”

The Economics Of Keystone XL 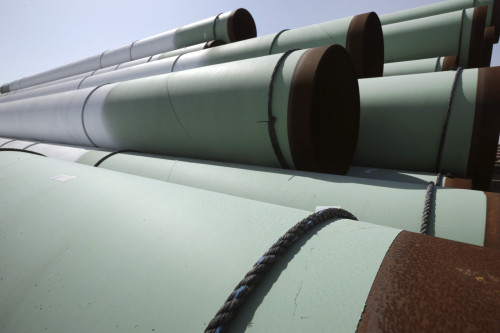 Some of more than 350 miles of pipe awaiting shipment for the Keystone XL oil pipeline is stored at Welspun Tubular, in Little Rock, Ark., Wednesday, Aug. 20, 2014. (AP)

The Keystone Pipeline is closer than ever to being built. We look at the politics and the economics of Keystone.

This week the US Senate will vote on the fate of the long delayed Keystone XL pipeline. If it passes, the President is likely to veto the measure, setting up a showdown with his critics in Congress — including some members of his own party. The pipeline would bring crude oil from Canada to refineries on the Gulf Coast. Supporters say it will bring jobs, economic growth, and greater energy independence. But opponents insist it’s an environmental disaster waiting to happen. This hour On Point, pipeline politics, economics, science and the symbolism of Keystone.

David Keith, professor of applied physics in the Harvard school of engineering and applied sciences and of public policy in the Harvard Kennedy School. Author of “A Case for Climate Engineering.”