While other investors are reconsidering their investment in Ebola hit West African countries, palm oil Company, Goldtree has recently committed $18.3 million to expanding its existing operations in the Kailahun district of Sierra Leone. This will increase Goldree’s overall investment in Sierra Leone to $42 million.

Kailahun, one of Sierra Leone’s poorest districts is also one of the country’s Ebola epicentres. With a workforce of 500 people, Goldtree is the area’s largest employer. Its sustainable enterprise model further supports an extensive agricultural community, by buying in fruit from over 9,000 local out growers. The company’s considerable investment is intended to ensure much needed economic development in the area and set Sierra Leone on the path to becoming a significant exporter of palm oil in the country’s post-Ebola economy.

Welcoming the move by Goldtree’s board, the Minister of Agriculture, Forestry and Food Security, Dr Joseph Sam Sesay said that the Ebola epidemic would be contained and that Sierra Leone’s long-term economic outlook remained healthy. “Goldtree’s investment gives a vital boost to the country’s agricultural sector, which remains the largest sector of the Sierra Leone economy. Kailahun, the host district of Goldtree, has also been the worst hit by the negative impact of Ebola. Lost GDP in Sierra Leone due to Ebola could reach $439 million according to expert analysis. In Kailahun a good number of farmers have abandoned their land to move to non-affected areas. Goldtree’s timely investment will help protect Sierra Leonean livelihoods today and kick start tomorrow’s economic recovery. It also sends a clear message to the world that Sierra Leone remains open for business.”

Goldtree was established in 2007 by Pan African Agriculture which raised further funds from the African Agricultural Fund (AAF) and the Finnish Development Fund in 2009. AAF is a development fund based in South Africa, funded by the Overseas Private Investment Corporation (OPIC), DfID and the Spanish Agency for International Development Cooperation (AECID) amongst others. The Goldtree board consists of shareholder representatives plus three local businessmen, John Bonoh Sisay (CEO of Sierra Rutile), Andrew Keili (Executive Director of CEMMATS) and Mustapha Turay (Resident Director of Diamond Counsellor International).

The company has agreed an immediate contribution of $3.3 million to meet current expenditure and mitigate the economic impact of Ebola. The remaining $15 million will fund an expansion programme which includes extending the company’s plantations, doubling the size of its dedicated palm oil mill and building a tank farm at a port in Sierra Leone for the export of palm oil. One million dollars has been earmarked to increase fruit yields by developing the skills and farm management practices of local farmers.

From divestment to engagement 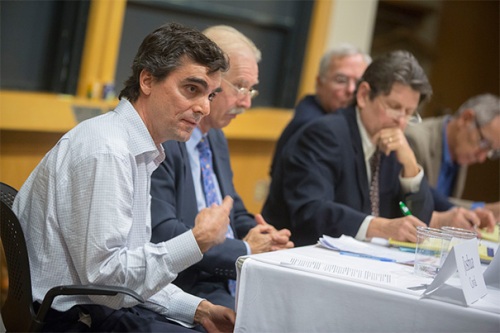 Ours is the only generation that will have a chance to take meaningful action on climate change, a Harvard Business School (HBS) panelist said yesterday. The question is: What action will we take?

The panelists at HBS’ Hawes Hall examined strategies for investors concerned about climate change and seeking to influence corporate behavior on the issue. Options ranged from outright divestment of stock in fossil-fuel companies, to major investors pushing to to put climate change on company agendas, to blocking corporate action such as supporting climate-change denial, and even to replacing board members who are recalcitrant on the issue.

Several panelists agreed that the real arena in which action on climate change must occur is the halls of government. Rebecca Henderson, the John and Natty McArthur University Professor and the event’s host, said the issue could be addressed relatively easily with government-instituted global prices on carbon, but there are massive hurdles to getting agreement on that.

“It is in everyone[’s] … interest to have everyone else do something,” Henderson said. “It’s a massive social-action problem.”

Absent government action, Henderson said, some critics seek divestment of stocks in fossil-fuel companies as a way to pressure them into action, while others argue that by divesting, investors lose their leverage as stockholders to influence corporate behavior.

“This debate seems to me to be very topical, and one of the things that Harvard can do is to have a conversation on this,” Henderson said.

The panel included Joshua Coval, the Jay O. Light Professor of Business Administration; Chris Davis, director of investor programs at CERES and chief of staff of the Investor Network on Climate Risk; Bob Massie, co-founder of the Global Reporting Initiative and a divestment activist; Timothy Smith, director of ESG shareholder engagement at Walden Asset Management, and Robert Zevin, founder of Zevin Asset Management. The event was sponsored by the HBS Business & Environment Initiative, the HBS Finance Club, and the HBS Energy and Environment Club.

Kicking off the discussion, Coval said the evidence is pretty clear that divestment of stock exerts little, if any, economic pressure on a company to change its behavior. Even a spectacularly successful divestment campaign would involve only a fraction of a company’s shareholders, and there would likely be many other companies and individuals willing to buy the divested shares, he said. A study of the divestment campaign aimed at companies doing business in South Africa during apartheid found that the companies themselves were not hurt.

It “found no impact whatsoever. Surprising, but ultimately a pretty convincing study to me,” Coval said. 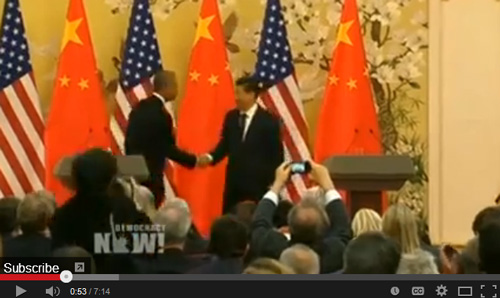 The United States and China, the world’s two largest polluters, have agreed to limit greenhouse gas emissions over the next decade. President Obama unveiled the deal at a news conference with Chinese President Xi Jinping in Beijing.

President Obama: “Today I can also announce that the United States has set a new goal of reducing our net greenhouse gas emissions by 26 to 28 percent below 2005 levels by the year 2025. This is an ambitious goal, but it is an achievable goal. It will double the pace at which we’re reducing carbon pollution in the United States. It puts us on a path to achieving the deep emissions reductions by advanced economies that the scientific community says is necessary to prevent the most catastrophic effects of climate change.”

China has also made its first-ever commitment to stop emissions from growing by 2030. The agreement was negotiated in secret over nine months.

Obama Calls for Net Neutrality, But His Own Industry-Tied FCC Appointee Could Stand in the Way

http://democracynow.org – In a strong statement in favor of a free and open Internet, President Obama has called on the Federal Communications Commission to uphold the principle of net neutrality by classifying the Internet as a public utility. Obama said such protections would prevent Internet service providers like Comcast from blocking access to websites, slowing down content or providing paid fast lanes for Internet service. Obama’s proposal comes as his appointed FCC chair, Tom Wheeler, a former lobbyist for the cellphone and cable industries, is considering breaking with the president on net neutrality. According to The Washington Post, Wheeler met with officials from Google, Yahoo and Etsy on Monday and told them he preferred a more nuanced solution. Wheeler reportedly said: “What you want is what everyone wants: an open Internet that doesn’t affect your business. What I’ve got to figure out is how to split the baby.” On Monday, protesters called on Wheeler to favor net neutrality as they blockaded his driveway when he attempted to go to work. Protests also took place in a dozen cities last week after The Wall Street Journal reported the FCC is considering a “hybrid” approach to net neutrality. This would apply expanded protections only to the relationship between Internet providers and content firms, like Netflix, and not to the relationship between providers and users. We discuss the ongoing debate over the Internet’s future with Steven Renderos of the Center for Media Justice.

http://democracynow.org – The United States and China, the world’s two largest polluters, have agreed on new target limits for greenhouse gas emissions over the next decade. Announcing the deal in China with Chinese President Xi Jinping, President Obama said the United States will set a goal of reducing carbon emissions 26 to 28 percent below 2005 levels by 2025, a doubling of current reduction efforts. China has also made its first-ever commitment to stop emissions from growing by 2030. We are joined by Jake Schmidt, director of the International Program at the Natural Resources Defense Council.

http://www.sciencedaily.com/releases/2014/11/141111133606.htm
November 11, 2014
Source:
Purdue University
Summary:  Crop producers and scientists hold deeply different views on climate change and its possible causes, a study shows. Researchers surveyed 6,795 people in the agricultural sector in 2011-2012 to determine their beliefs about climate change and whether variation in the climate is triggered by human activities, natural causes or an equal combination of both.

Associate professor of natural resource social science Linda Prokopy and fellow researchers surveyed 6,795 people in the agricultural sector in 2011-2012 to determine their beliefs about climate change and whether variation in the climate is triggered by human activities, natural causes or an equal combination of both.

More than 90 percent of the scientists and climatologists surveyed said they believed climate change was occurring, with more than 50 percent attributing climate change primarily to human activities.

The survey results highlight the division between scientists and farmers over climate change and the challenges in communicating climate data and trends in non-polarizing ways, Prokopy said.

Feeding Moloch: The Sacrifice of Children on the Altar of Capitalism

Russell Banks, one of the United States’s most celebrated writers of contemporary fiction, delivers the 2014 Ingersoll Lecture on Immortality at Harvard Divinity School.

Banks argues that immortality, if it exists, lies with people’s descendants—their children, and their children’s children, and on. In the modern era, he states, it has become increasingly difficult to protect children from dangerous forces in the world. Today, children have become the largest single segment of the consumer economy.

17:10 “Feeding Moloch: The Sacrifice of Children on the Altar of Capitalism” by Russell Banks

Learn more about Harvard Divinity School and its mission to illuminate, engage, and serve at www.hds.harvard.edu.

Matt Taibbi, Rolling Stone Magazine / The Divide: American Injustice in the Age of the Wealth Gap joins Thom Hartmann. More than 6 years after the financial crisis – Wall Street executives like Jamie Dimon still walk around without any fear of going to jail. Why is that – and what can we do to change it?

“For each Ebola patient, we need at least 150 litres of water”

“For each Ebola patient to be fully cared for, we need at least 150 litres of water. That is 10 times what a normal Liberian gets as of now,” says UNICEF Water and Sanitation Specialist Michael Forson. “We are building a new Ebola treatment unit here; this Ebola treatment unit is necessary because the existing ones are already full, but that means the necessary need for water to care for them. That is where UNICEF comes in.”