Costing the Earth: The Challenge for Governments, the Opportunities for Business: Frances Cairncross

Frances Cairncross, environment editor of The Economist, shows how clear-sighted economic policies can be harnessed to help the environment, and how resourceful companies can turn the public’s concern for a cleaner environment to their corporate advantage. She argues that successful environmental policies will be the ones that encourage the inventive power of industry. Working together, industry and government can form a formidable alliance: one that fosters economic growth and preserves the environment.

Costing the Earth identifies an extraordinary opportunity for enterprise and invention, making it essential reading for all managers concerned about meeting the growing demands of a “green” economy. “[A] thoughtful and highly readable book. . .Cairncross’s range is wide-she covers programs from the United States to Kenya-and with an economist’s good sense she punctures sacred cows. . .She is generally an optimist; she believes that a mixture of market forces and government controls can solve most of our environmental problems”.-Allison Green, Sloan Management Review. “Costing the Earth is a very fine overview of issues that are infinitely complex. No manager should venture much further into this decade without reading it”.-Colin Tudge, Management Today.

Frances Cairncross is the Management Editor at The Economist and author of The Death of Distance: How the Communications Revolution Is Changing Our Lives. She resides in London, England.

A good book may have the power to change the way we see the world, but a great book actually becomes part of our daily consciousness, pervading our thinking to the point that we take it for granted, and we forget how provocative and challenging its ideas once were—and still are. The Structure of Scientific Revolutions is that kind of book. When it was first published in 1962, it was a landmark event in the history and philosophy of science. Fifty years later, it still has many lessons to teach.

With The Structure of Scientific Revolutions, Kuhn challenged long-standing linear notions of scientific progress, arguing that transformative ideas don’t arise from the day-to-day, gradual process of experimentation and data accumulation but that the revolutions in science, those breakthrough moments that disrupt accepted thinking and offer unanticipated ideas, occur outside of “normal science,” as he called it. Though Kuhn was writing when physics ruled the sciences, his ideas on how scientific revolutions bring order to the anomalies that amass over time in research experiments are still instructive in our biotech age.

This new edition of Kuhn’s essential work in the history of science includes an insightful introduction by Ian Hacking, which clarifies terms popularized by Kuhn, including paradigm and incommensurability, and applies Kuhn’s ideas to the science of today. Usefully keyed to the separate sections of the book, Hacking’s introduction provides important background information as well as a contemporary context. Newly designed, with an expanded index, this edition will be eagerly welcomed by the next generation of readers seeking to understand the history of our perspectives on science.

How a national food policy could save millions of American lives 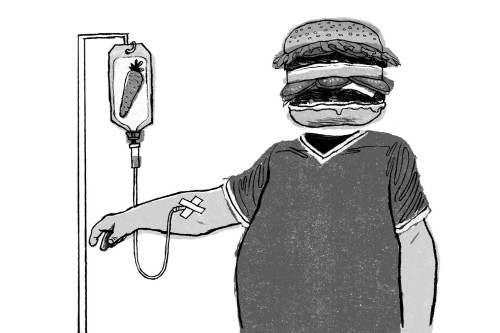 Mark Bittman, an opinion columnist and food writer for the New York Times, is the author of “How to Cook Everything Fast .” Michael Pollan, who teaches journalism at the University of California at Berkeley, is the author of “The Omnivore’s Dilemma .” Ricardo Salvador is a senior scientist and director of the food and environment program at the Union of Concerned Scientists. Olivier De Schutter, a professor of international human rights law at the Catholic University of Louvain, was the U.N. special rapporteur on the right to food from 2008 to 2014.

How we produce and consume food has a bigger impact on Americans’ well-being than any other human activity. The food industry is the largest sector of our economy; food touches everything from our health to the environment, climate change, economic inequality and the federal budget. Yet we have no food policy — no plan or agreed-upon principles — for managing American agriculture or the food system as a whole.

Ecological Economics and the Ecology of Economics: Essays in Criticism | Herman Daly 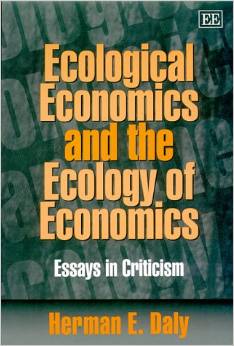 In this new book Herman Daly, a leading commentator on the environment, offers lively criticism of existing work on ecological economics and the economics of ecology. The theme throughout the book is about changes in perspective, attitudes and policies required to avoid uneconomic growth – that is, the impoverishment that results when the environmental and social costs of growth exceed the benefits.

Key issues addressed include: growth economics; misunderstandings of thermodynamics; economic development and population; globalization; money; and humans in the ecosystem. This book should be of interest to economists, ecologists, environmentalists, public policy scholars and activists as well as social philosophers 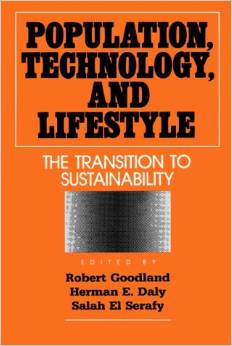 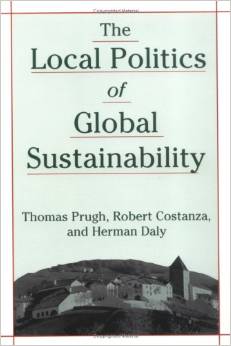 The most difficult questions of sustainability are not about technology; they are about values. Answers to such questions cannot be found by asking the “experts,” but can only be resolved in the political arena. In “The Local Politics of Global Sustainability,” author Thomas Prugh, with Robert Costanza and Herman Daly, two ofthe leading thinkers in the field of ecological economics, explore the kind of politics that can help enable us to achieve a sustainable world of our choice, rather than one imposed by external forces.

The authors begin by considering the biophysical and economic dimensions of the environmental crisis, and tracing the crisis in political discourse and our public lives to its roots. They then offer an in-depth examination of the elements of a re-energized political system that could lead to the development of more sustainable communities. Based on a type of self-governance that political scientist Benjamin Barber calls “strong democracy,” the politics is one of engagement rather than consignment, empowering citizens by directly involving them in community decisionmaking. After describing how it should work, the authors provide examples of communities that are experimenting with various features of strong democratic systems.”The Local Politics of Global Sustainability” explains in engaging, accessible prose the crucial biophysical, economic, and social issues involved with achieving sustainability. It offers a readable exploration of the political implications of ecological economics and will be an essential work for anyone involved in that field, as well as for students and scholars in environmental politics and policy, and anyone concerned with the theory andpractical applications of the concept of sustainable development.

This book seeks to identify the blind spots and errors in standard growth economics, alongside the corrections that ecological economics offers to better guide us toward a sustainable economy – one with deeper biophysical and ethical roots.

Under the general heading of sustainability and ecological economics, many specific topics are here brought into relation with each other.These include: limits to growth; full-world versus empty-world economics; uneconomic growth; definitions of sustainability; peak oil; steady-state economics; allocation versus distribution versus scale issues; non-enclosure of rival goods and enclosure of non-rival goods; production functions and the laws of thermodynamics; OPEC and Kyoto; involuntary resettlement and development; resource versus value-added taxation; globalization versus internationalization; immigration; climate change; and the philosophical presuppositions of policy, including the policies suggested in connection with the topics above.

This fascinating work will appeal to scholars and academics of ecological, environmental, development, and environmental resource economics and studies. 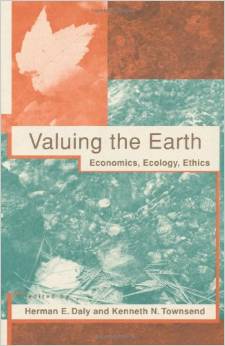 Valuing the Earth collects more than twenty classic and recent essays that broaden economic thinking by setting the economy in its proper ecological and ethical context. They vividly demonstrate that, contrary to current macroeconomic preoccupations, continued growth on a planet of finite resources cannot be physically or economically sustained and is morally undesirable.Among the issues addressed are population growth, resource use, pollution, theology (east and west), energy, and economic growth. Their common theme is the notion, popular with classical economists from Malthus to Mill, that an economic stationary state is more healthful to life on earth than unlimited growth.

For The Common Good: Redirecting the Economy toward Community, the Environment, and a Sustainable Future: Herman E. Daly, John B. Cobb Jr.

Economist Herman Daly and theologian John Cobb, Jr., demonstrate how conventional economics and a growth-oriented industrial economy have led us to the brink of environmental disaster, and show the possibility of a different future.