Low income and communities of color are disproportionately impacted by pollution across the United States, according to a new study by economist James K. Boyce

Is This “American Exceptionalism”?

Just how exceptional is the United States really?

Everyone loves to talk about US exceptionalism.

We constantly hear our politicians say that “America is the greatest country in the world.”

But just how great are we?

In reality, when it comes to things that could really make the US great, we’re lagging behind much of the developed world.

A study earlier this year by the Commonwealth Fund found that of the top 11 developed nations, the United States ranks dead last in health care and health outcomes like infant mortality and life expectancy.

Meanwhile, while the US is at the bottom of the health-care barrel, we’re also far behind when it comes to education and educational outcomes.

Last year, the Program for International Student Assessment looked at how 15-year-old students in 65 nations across the globe performed on a variety of tests.

The group found that US students ranked just 17th in reading comprehension and 21st in math.

Pesticide Use by Farmers Linked to High Rates of Depression, Suicides

Farmers spraying pesticide. Research suggests that pesticides applied by farmers and their workers may alter brain chemicals. (Photo via Shutterstock)

On his farm in Iowa, Matt Peters worked from dawn to dusk planting his 1,500 acres of fields with pesticide-treated seeds. “Every spring I worried about him,” said his wife, Ginnie. “Every spring I was glad when we were done.”

In the spring of 2011, Ginnie Peters’ “calm, rational, loving” husband suddenly became depressed and agitated. “He told me ‘I feel paralyzed’,” she said. “He couldn’t sleep or think. Out of nowhere he was depressed.”

A clinical psychologist spoke to him on the phone and urged him to get medical help. “He said he had work to do, and I told him if it’s too wet in the morning to plant beans come see me,” Mike Rossman said. “And the next day I got the call.”

Peters took his own life. He was 55 years old.

No one knows what triggered Peters’ sudden shift in mood and behavior. But since her husband’s death, Ginnie Peters has been on a mission to not only raise suicide awareness in farm families but also draw attention to the growing evidence that pesticides may alter farmers’ mental health.

From Indigenous Socialism to Colonial Capitalism, Examining Native History of a Settler State

Roxanne Dunbar-Ortiz, author of An Indigenous People’s History of the United States. The false narrative of Columbus “discovering” the Americas still pervades history books and the Eurocentric mindset of the United States. Learn the true history of what author and professor Roxanne Dunbar-Ortiz calls the legacy of Columbus’ voyages: the annihilation and conquest of Native Americans.

An injury to one is an injury to all, the old labor slogan goes. What if we applied that idea to US indigenous history? How does the history of genocide affect all people in the United States even today?

This week, as some in the United States mark Indigenous People’s Day, author and professor Roxanne Dunbar-Ortiz suggests that while remembering native history is good, it would be far better if we took the time and all got a lot smarter about how the treatment of Native Americans set wheels in motion that affect us all through to the present.

In her new book An Indigenous People’s History of the United States, longtime author-activist Roxanne Dunbar-Ortiz corrects the record: The precolonial continent wasn’t untamed, uncultivated: “There was a road from Alaska down to southern Mexico; roads that [went] from east to west, north to south . . . Not paths . . . not roads just for hunting paths or migrations.” These were trade routes, reports Dunbar-Ortiz. “They had stops; they had places to stay . . . And trade items from central Mexico ended up in what is now Quebec and the Great Lakes area and vice versa.”

Before colonial capitalism, there existed what she calls “indigenous socialism.” The destruction of that economy through war, denial of self-determination, dispossession, criminalization and violence against women affected no group more than indigenous people, but they weren’t the only ones.

Colonialism, she argues, served as “an escape valve for the mother country.” Peasants thrown off their lands with the enclosure of the commons were assuaged with an offer of land “where they could be lord,” she says. But poor settlers too were “duped.”

“Corporations are predators to everyone now,” she said.

Understanding indigenous history not only reveals a lot about how we all live and why; reconnecting the dots of this history gives glimpses of alternatives and ways, she suggests, to, as Naomi Klein says, “change everything.” Dunbar-Ortiz traces her own heritage to Oklahoma white settlers and to Cherokees. Her other books include Red Dirt, Growing Up Okie, Outlaw Woman and Blood on the Border, A Memoir of the Contra War. The video of our conversation can be seen on The Laura Flanders show at GRITtv.org, or on Telesur English. The text has been edited lightly for publication. 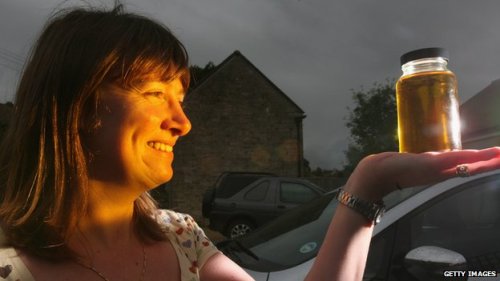 The UK’s “irrational” use of biofuels will cost motorists around £460 million over the next 12 months, a think tank says.

The author says that biodiesel made from vegetable oil was worse for the climate than fossil fuels.

Under EU law, biofuels are set to make up 5% of the UK’s transport fuel from today.

“It creates a financial incentive to buy refined palm oil, cook a chip in it to turn it into used cooking oil and then sell it at profit…” Rob Bailey Chatham House

Since 2008, the UK has required fuel suppliers to add a growing proportion of sustainable materials into the petrol and diesel they supply. These biofuels are mainly ethanol distilled from corn and biodiesel made from rapeseed, used cooking oil and tallow.

But research carried out for Chatham House says that reaching the 5% level means that UK motorists will have to pay an extra £460m a year because of the higher cost of fuel at the pump and from filling up more often as biofuels have a lower energy content.

BBC News – Italy pushes ahead with ‘next generation’ biofuels from waste

Italy will become the first country in Europe to legally require “advanced biofuels” in cars and trucks, the BBC has learned.

Made from waste, the new fuels are said to reduce the amount of land taken out of food production.

From 2018, all fuel suppliers in the country will have to include 0.6% advanced biofuel in petrol and diesel.

The use of fuels made from crops has been a controversial issue across the EU in recent years.

A Renewable Energy Directive, adopted in 2009, required that 10% of energy used within the transport sector came from renewable sources.

Amid concerns that land was being converted from food production to grow crops for biofuels, the EU ultimately reduced this to 5.75%.

At the same time, the European Parliament voted to require a 2.5% target for advanced biofuels by 2020.

However European Council of energy ministers diluted this to a non-binding goal of 0.5% much to the dismay of the biofuels industry.

Now the Italian government have given the enterprise a shot in the arm.

Weak economic growth will cut demand for oil. In addition, Reuters reported that Saudi Arabia had indicated it could cope with lower prices.

Last week, the International Monetary Fund shaved its forecast for global growth for this year from 3.4% to 3.3%.

It said overall global growth would be held back by weakness in Japan, Latin America and Europe, with any recovery in the advanced economies “weak and uneven”.

Share values have been falling recently, with some analysts arguing they are catching up with economic reality.

Alastair McCaig, market analyst at City watchers IG, said: “Just over a month ago expectations that the FTSE could break above the 7,000 level were the norm, with the index trading less than 100 points away.

“The subsequent economic data out of Germany and dismantling of confidence has not only slaughtered European markets but dragged the UK down too.”

Although some members of the Opec oil producers’ cartel are pushing for production cuts to take the oil price back to the $100-a-barrel level, the Reuters news agency reported that Saudi Arabia had let it be known informally that it would be unlikely to push for a cut in production to boost prices even if they fell to $80 a barrel.

Oil prices have fallen 20% since June.

from depleted uranium (DU) munitions is causing sharp rises in congenital birth defects, cancer cases and other illnesses throughout much of Iraq, according to numerous Iraqi doctors.

Iraqi doctors and prominent scientists believe that DU contamination is also connected to the emergence of diseases that were not previously seen in Iraq, such as new illnesses in the kidney, lungs and liver, as well as total immune system collapse. DU contamination may also be connected to the steep rise in leukaemia, renal and anaemia cases, especially among children, being reported throughout many Iraqi governorates.

There has also been a dramatic jump in miscarriages and premature births among Iraqi women, particularly in areas where heavy US military operations occurred, such as Fallujah during 2004, and Basra during the 1991 US war on Iraq.

It is estimated that the United States used 350 tons of DU munitions in Iraq during the 1991 war, and 1,200 tons during its 2003 invasion and subsequent occupation.

The actual rate of cancer and other diseases is likely to be much higher than even these figures suggest, due to a lack of adequate documentation, research and reporting of cases.

“Cancer statistics are hard to come by, since only 50 percent of the health care in Iraq is public,” Dr. Salah Haddad of the Iraqi Society for Health Administration and Promotion told Truthout. “The other half of our health care is provided by the private sector, and that sector is deficient in their reporting of statistics. Hence, all of our statistics in Iraq must be multiplied by two. Any official numbers are likely only half of the real number.”

“The world should know that Iraqi people were the victims of the aggression inflicted by the use of DU munitions by the American and British troops during these wars, and this is genocide,” Dr. Jawad al-Ali, a consultant physician and oncologist, told Truthout.

He attributes the extreme rates of birth defects in Fallujah to the US use of DU there during its two sieges of the city in 2004.

In Chew On This, Laura talks to Tom Goldtooth about today’s solutions to the problem – what does indigenous sustainable society look like? And the F Word with Laura Flanders.

Author and historian Roxanne Dunbar Ortiz joins GRITtv to discuss how the history of genocide of Native peoples Effects all people of the US, even today. In Chew On This, Laura talks to Tom Goldtooth about today’s solutions to the problem – what does indigenous sustainable society look like? And the F Word with Laura Flanders.