World Bank President Jim Yong Kim says he is encouraged by the many organizations that have “stepped up” to help battle Ebola. He was speaking during the closing of the 2014 World Bank IMF annual meeting. According to the World Bank, Ebola will cause the loss of hundreds of millions of dollars in economic growth in the affected countries 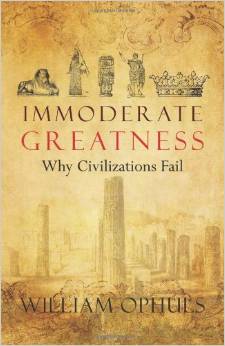 *Immoderate Greatness* explains how a civilization’s very magnitude conspires against it to cause downfall. Civilizations are hard-wired for self-destruction. They travel an arc from initial success to terminal decay and ultimate collapse due to intrinsic, inescapable biophysical limits combined with an inexorable trend toward moral decay and practical failure. Because our own civilization is global, its collapse will also be global, as well as uniquely devastating owing to the immensity of its population, complexity, and consumption. To avoid the common fate of all past civilizations will require a radical change in our ethos—to wit, the deliberate renunciation of greatness—lest we precipitate a dark age in which the arts and adornments of civilization are partially or completely lost.

In a slight digression from the usual pure market-based discussions of Jeremy Grantham’s perspectives, the fund manager addresses what is potentially and even more critical factor for the markets. As he writes, we are in a race for our lives, as our global economy, reckless in its use of all resources and natural systems, shows many of the indicators of potential failure that brought down so many civilizations before ours. By sheer luck, though, ours has two features that might just save our bacon: declining fertility rates and progress in alternative energy. Our survival might well depend on doing everything we can to encourage their progress. Vested interests, though, defend the status quo effectively and the majority much prefers optimistic propaganda to uncomfortable truth and wishful thinking rather than tough action. It is likely to be a close race.

Jeremy Grantham: In a Climate of Risk 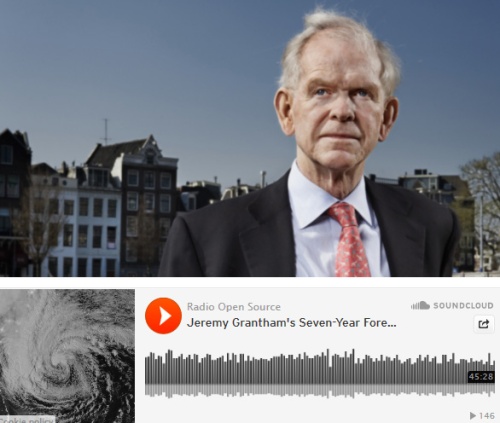 Jeremy Grantham is a Boston financier who has found himself in the thick of the fight over climate change for more than twenty years. He’s the founder and chief strategist of Grantham Mayo van Otterloo, or GMO, which manages $112 billion in assets.

When we spoke to him in his Rowes Wharf office, overlooking Boston Harbor, Grantham calls himself a “scatterbrained” investor working with a third-rate education. If, after raising the alarm loudly and very early about the catastrophic market bubbles of 1999 and 2008, he’s become one of America’s most prominent financial strategists, it’s a tribute to natural patience and a conservatism that he chalks up to a Yorkshire childhood and a Quaker grandfather. But Grantham’s also glad to carry weight in the world of feverish investment. His quarterly letters have become must-reads, offering a warier look, going deeper into the future, than one usually finds on Wall Street. (His latest is here.)

Grantham discovered the fragility and beauty of the natural world on family trips into old and ravaged forests of the Amazon basin and Borneo. Now his family foundation is engaged in a farsighted effort to fight climate-skeptical “propaganda” with propaganda of its own: funding change-now messages from groups like Bill McKibben’s 350.org, Greenpeace, and the World Wildlife Fund. It’s the “race of our lives”, he wrote: against short-term psychology and an entrenched fossil-fuel economy. Grantham is troubled by the long odds, but still he’s trying to draw money and mass attention to an existential risk — before it’s too late to do anything about it. Call it the biggest short. 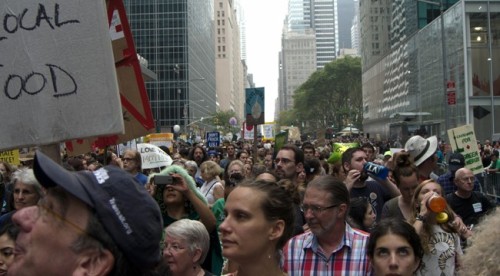 NEW YORK, NY. — I traveled down to New York for the People’s Climate March, I admit, out of a sense of political curiosity. I care, but like many Americans I’ve found it hard to rate the climate over poverty or prison or the foreign-policy fires that break out from time to time. By chance a friend and I had joined an interfaith brigade, a subsection in the People’s Climate March had assembled on West 58th Street, in the shadow of The Shops at Columbus Circle and CNN HQ. It was around eleven o’clock.

At the front of the crowd, Rabbi Jay Michaelson stood at the stern of an ark-shaped float on the back of a truck, wearing a technicolor tallit. The ark was a new construction; organizers hoped it could be reused. Right then it held ministers and kids, markers and tape; a few volunteers wore horse masks or had paper unicorn horns strapped to their heads, and signs that read: “We Missed the Boat Last Time,” etc., etc.

The End of the Lone Genius | Open Source with Christopher Lydon 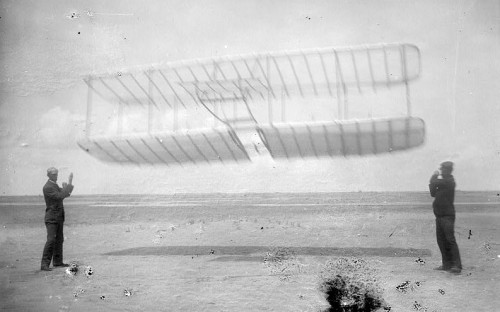 Joshua Wolf Shenk’s new book, completely fascinating and a safe indoor sport for any number of parlor players, is called Powers of Two. The core idea is that the creative spark that rules our lives — in music, comedy, sports, even scientific discovery — is not a single flame, it’s almost always a pair of creators sparking off each other. Whether you’re talking about Watson and Crick, Gilbert and a Sullivan, Bird and Magic, or the Wright Brothers—it takes two.

These pairs fall into several archetypes, Shenk says, including “the dreamer and the doer.” Such a pair might be the ideal-driven tech entrepreneur Steve Jobs and the practical-minded engineer Steve Wozniak. Or there’s “the liquid and the container,” typified by John Lennon and Paul McCartney—a boundlessly energetic, Dionysian creator brought down to earth by a more ordered character.

Writers are no exception to the model. Even Emily Dickinson, famously secluded in her later life, found in her sister-in-law a creative influence second only to Shakespeare, she wrote, and named Thomas Wentworth Higginson as her preceptor. Creative pairs are everywhere.

Food and Agriculture Organization of the UN – Video Playlists

The FAO of the UN leads international efforts to defeat hunger. Serving both developed and developing countries, FAO acts as a neutral forum where all nations meet as equals to negotiate agreements and debate policy. FAO is also a source of knowledge and information. We help developing countries and countries in transition modernize and improve agriculture, forestry and fisheries practices and ensure good nutrition for all. Since our founding in 1945, we have focused special attention on developing rural areas, home to 70 percent of the world’s poor and hungry people. FAO’s activities comprise four main areas:

3. Providing a meeting place for nations.

4. Bringing knowledge to the field.

A health care worker in the US who looked after an Ebola patient who later died has now tested positive in a preliminary test.

That announcement from Texas health officials, who say further testing is needed to confirm the diagnosis.

They say the worker had looked after Liberian man Thomas Duncan, who became the US’s first Ebola fatality.

The worker reported a slight fever on Friday night and was isolated and referred for testing.

Health officials say they were prepared for the possibility o…
READ MORE : http://www.euronews.com/2014/10/12/te…

US airports step up screening of passengers for signs of Ebola

JFK airport in the US has begun stepping up the screening of travellers as the US vows to do more to prevent an Ebola outbreak.

Other American airports are also boosting their screening.

In scenes familiar now in numerous countries, medical teams are questioning passengers, especially those arriving from West Africa, and checking for high temperatures.

It means longer delays, but most passengers do not seem to mind.