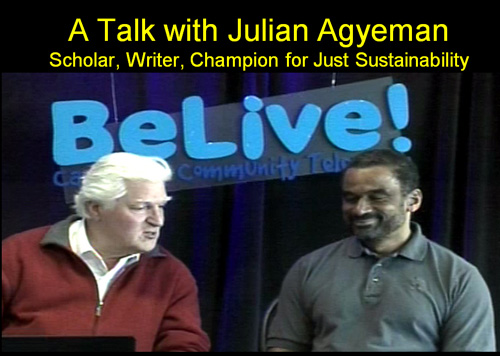 Click Here, for further information on the insight and work of Dr. Julian Agyeman

The ‘Complete Streets’ concept and movement in urban planning and policy has been hailed by many as a revolution that aims to challenge the auto-normative paradigm by reversing the broader effects of an urban form shaped by the logic of keeping automobiles moving. By enabling safe access for all users, Complete Streets promise to make cities more walkable and livable and at the same time more sustainable.

This book problematizes the Complete Streets concept by suggesting that streets should not be thought of as merely physical spaces, but as symbolic and social spaces. When important social and symbolic narratives are missing from the discourse and practice of Complete Streets, what actually results are incomplete streets. The volume questions whether the ways in which complete streets narratives, policies, plans and efforts are envisioned and implemented might be systematically reproducing many of the urban spatial and social inequalities and injustices that have characterized cities for the last century or more. From critiques of a “mobility bias” rooted in the neoliberal foundations of the Complete Streets concept, to concerns about resulting environmental gentrification, the chapters in Incomplete Streets variously call for planning processes that give voice to the historically marginalized and, more broadly, that approach streets as dynamic, fluid and public social places.

This interdisciplinary book is aimed at students, researchers and professionals in the fields of urban geography, environmental studies, urban planning and policy, transportation planning, and urban sociology.

Hitchens cited the Bosnian war as something that monumentally changed his views on military intervention and that he for the first time found himself on the side of the neoconservatives. In an interview with Johann Hari he said:
“That war in the early 1990s changed a lot for me. I never thought I would see, in Europe, a full-dress reprise of internment camps, the mass murder of civilians, the reinstiutution of torture and rape as acts of policy. And I didn’t expect so many of my comrades to be indifferent — or even take the side of the fascists. It was a time when many people on the left were saying ‘Don’t intervene, we’ll only make things worse’ or, ‘Don’t intervene, it might destabilise the region. And I thought — destabilisation of fascist regimes is a good thing. Why should the left care about the stability of undemocratic regimes? Wasn’t it a good thing to destabilise the regime of General Franco? It was a time when the left was mostly taking the conservative, status quo position — leave the Balkans alone, leave Milosevic alone, do nothing. And that kind of conservatism can easily mutate into actual support for the aggressors. Weimar-style conservatism can easily mutate into National Socialism. So you had people like Noam Chomsky’s co-author Ed Herman go from saying ‘Do nothing in the Balkans’, to actually supporting Milosevic, the most reactionary force in the region. That’s when I began to first find myself on the same side as the neocons. I was signing petitions in favour of action in Bosnia, and I would look down the list of names and I kept finding, there’s Richard Perle. There’s Paul Wolfowitz. That seemed interesting to me. These people were saying that we had to act. Before, I had avoided them like the plague, especially because of what they said about General Sharon and about Nicaragua. But nobody could say they were interested in oil in the Balkans, or in strategic needs, and the people who tried to say that — like Chomsky — looked ridiculous. So now I was interested.”

Following the 9/11 attacks, Hitchens and Noam Chomsky debated the nature of radical Islam and of the proper response to it. On 24 September and 8 October 2001, Hitchens wrote criticisms of Chomsky in The Nation. Chomsky responded and Hitchens issued a rebuttal to Chomsky to which Chomsky again responded. Approximately a year after the 9/11 attacks and his exchanges with Chomsky, Hitchens left The Nation, claiming that its editors, readers and contributors considered John Ashcroft a bigger threat than Osama bin Laden, and were making excuses on behalf of Islamist terrorism; in the following months he wrote articles increasingly at odds with his colleagues. This highly charged exchange of letters involved Katha Pollitt and Alexander Cockburn, as well as Hitchens and Chomsky. Hitchens was also severely criticized by Norman Finkelstein, an American political scientist and Hitchens’s former friend. Citing Hitchens’s support for the Iraq and Afghanistan Wars, as well as Hitchens’s critique of Mel Gibson’s Passion of the Christ, Finkelstein called Hitchens a “model apostate,” a “dirt bag,” and a “showboat run amuck” who is “dying for the camera.”

Hitchens strongly supported US military actions in Afghanistan, particularly in his “Fighting Words” columns in Slate. Hitchens had been a long term contributor to The Nation, where bi-weekly he wrote his “Minority Report” column.

Image By Paizanni (Own work) [GFDL (http://www.gnu.org/copyleft/fdl.html)
or CC-BY-3.0 (http://creativecommons.org/licenses/b…)], via Wikimedia Commons

Chomsky explains why Hitchens and Horowitz reversed everything they believed

Noam Chomsky talking about the similarities between Bolshevism and Capitalism

Dr. Noam Chomsky is a famed linguist, political activist, prolific author and recognized public speaker, who has spent the last 60 years living a double life — one as a political activist and another as a linguist. His activism allegedly made him the US government’s public enemy number one. As a linguist he is often credited for dethroning behaviorism and becoming the “father of modern linguistics” (and/or cognitive science). Put together his accomplishments are the reasons why he is often listed as one of the most important intellectuals of the 20th century. And so I was very much looking forward to interviewing him on Singularity 1 on 1.

Unfortunately our time together was delayed, then rushed and a bit shorter than anticipated. So I was pretty nervous throughout and messed up some of my questions and timing. Never-the-less, I believe that we still had a worthy conversation with Dr. Chomsky and I appreciate the generous though limited time that he was able to grant me.

During our 28 minute conversation with Noam Chomsky we cover a variety of interesting topics such as: the balance between his academic and his political life; artificial intelligence and reverse engineering the human brain; why in his view both Deep Blue and Watson are little more than PR; the slow but substantial progress of our civilization; the technological singularity…

Noam Chomsky and Glenn Greenwald (2014) “No Place to Hide”

June 4, 2014
Starts at 3:46
“If somebody was watching this from Mars, they’d think this species was insane.”
―Noam Chomsky 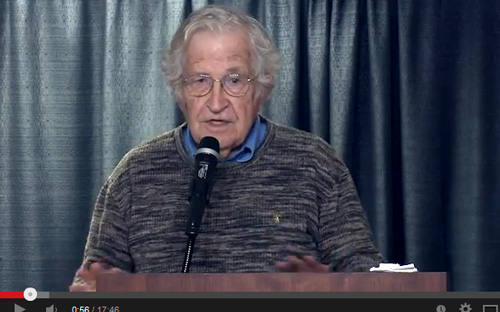 “Noam Chomsky”: Why you can not have a Capitalist Democracy

During the Q&A period after Noam Chomsky gave a lecture at 1199 SEIU Union Hall located in Dorchester, MA on September 30, 2014. “Capitalist Democracy and its Prospect’s” he spoke why you can not have a capitalist democracy. During the 18 minutes he speaks about one of the architects of modern Capitalism, Adam Smith, Laissez-faire Economics, people’s misinterpretations of Adam Smith specifically when it comes to what personal freedom actually is. He tears into what Modern Libertarianism has become in the US. He talks about the transitioning economy from being technology based to biology based. He finally discussed how people income impact political decisions and referred to the Orwellian term “Unpeople “to describe the largest percentage of people who are disenfranchised from political decisions and power and believes as compared to the occupy movement that the country is being rules in a Plutocracy ruled by the top 0.1% of wealth..

Unless otherwise indicated, all materials on in this video are copyrighted to Leigha Cohen Video, All rights reserved. No part of this video may be used for any purpose other than educational use and any monetary gain from this video is prohibited without prior permission from me. Therefore, reproduction, modification, storage in a retrieval system is prohibited. Standard linking of this video is allowed and encouraged.

RWW News : Huckabee Says Christians Must Vote Against Those Who Do Not Listen To ‘God’s Heart’

Right Wing Watch reports on the extreme rhetoric and activities of key right-wing figures and organizations by showing their views in their own words. In this video, Mike Huckabee says Christians must vote against candidates who do not share God’s heart in order to ensure that this nation will bow its knee to God.

This Week in Christian Psychobabble: Conflating Darwinism with Nazism and Other Fundamentalist Nonsense | Alternet

Republicans have a solution for what ails America; every problem in the U.S. can be solved if we all just embrace their concept of a Christian theocracy.

Leading the charge is former Baptist minister and Arkansas governor Mike Huckabee. The conservative television host wants the government to double down on Christianity, telling a crowd at the 2014 Values Voter Summit in Washington, D.C. that the country must find out who in the government are the true believers, and fire those who are not. Huckabee did not consider this idea’s blatant unconstitutionality.

Huckabee’s belief in making the government religiously pure fits right in line with the statements of Rand Paul, who published an op-ed in Time claiming that the issues the U.S. is facing could be solved if we would all just “seek God.” Not only did Paul attack secularism, he conflated belief with the Affordable Care Act saying, “Obamacare tries to force us to separate our faith from our business. Fortunately, the Supreme Court thought otherwise.”

Huckabee and Paul, both known for attacking President Obama’s “abuse” of the U.S. Constitution, seem to have no problem discarding the First Amendment and rebooting the U.S. as a Christian nation.