18. The beginning of the fight for the world’s most important resource: water. In Bolivia, privatization makes water unaffordable for many of its citizens and the resulting protest turns violent when the military opens fire.

For a playlist of all 23 chapters in order you can visit:

The film “Last Hours” is the 2nd film in the Green World Rising Series ( the first one is “Carbon” that is available on this channel). Last Hours describes a science-based climate scenario where a tipping point to runaway climate change is triggered by massive releases of frozen methane. Methane, a powerful greenhouse gas, has already started to percolate into the open seas and atmosphere from methane hydrate deposits beneath melting arctic ice, from the warming northern-hemisphere tundra, and from worldwide continental-shelf undersea methane pools.

Burning fossil fuels release carbon that, principally through greenhouse effect, heat the atmosphere and the seas. This is happening most rapidly at the polar extremes, and this heating has already begun the process of releasing methane. If we do not begin to significantly curtail the use of carbon-based fossil fuels, this freed methane threatens to radically accelerate the speed of global warming, potentially producing a disaster beyond the ability of the human species to adapt.
With this film, we hope to awaken people to the fact that the earth has experienced five major extinctions in the deep geologic past – times when more than half of all life on earth vanished – and that we are now entering a sixth extinction. Industrial civilization with its production of greenhouse gases has the potential to trigger a mass extinction on the order of those seen in the deep geological past. In the extreme, it could threaten not just human civilization, but the very existence of human life on this planet.

An asset for the climate change movement, “Last Hours” will be disseminated globally to help inform society about the dangers associated with climate change and to encourage the world community to chart a path forward that greatly reduces green house gas emissions. We encourage you to explore this website and the highlighted actions you can take to address climate change. We look forward to bringing you additional films about the challenges we face and the solutions that exist over the next few years, in the lead up to COP21, the 2015 UN Conference on Climate Change in Paris.

“Last Hours” is narrated by Leonardo DiCaprio, presented by Thom Hartmann and directed by Leila Conners. Executive Producers are George DiCaprio, Earl Katz and Roee Sharon Peled. Last Hours is produced by Mathew Schmid and was written by Thom Hartmann, Sam Sacks, and Leila Conners. Music is composed and performed by Francesco Lupica. Last Hours is brought to you by the Leonardo DiCaprio Foundation and produced by Tree Media.

See also :
Arpad Pusztai – Blowing the Whistle, He Knew the Truth About GMO’s Years Ago
Audio only:
http://oneradionetwork.com/health/fro…

Arpad Pusztai, Ph.D., received his degree in Chemistry in Budapest, Hungary and his B.Sc. in Physiology and Ph.D. in Biochemistry at the University of London in England.

Health risks of genetically modified foods
Stanley WB Ewen a, Arpad Pusztai b
Sir—Your May 29 editorial1 about the health risks of genetically modified (GM) food was apposite and addresses some of the important medical issues vigorously. It beggars belief that “badly designed, poorly carried out, inaccurately interpreted experiments” could have perpetuated such profound public debate for almost a year.

Regrettably, among the correspondents who responded to the editorial, Peter Lachman (July 3, p 69)2 accused you of factual inaccuracy, and it seems pertinent to remind him of the actual sequence of events. The Scottish Crop Research Institute (SCRI) did not initiate a study into GM potatoes. The research proposal for this “entirely sensible study” was, in fact, initiated by Susan Bardocz and Arpad Pusztai, written and submitted from the Rowett with the help of SCRI and Durham University scientists and coordinated by Pusztai.

Your editorial correctly notes that not all the facts were in the possession of the Royal Society. Thus, it is difficult to understand how they could deduce that the GM-potato experiments were “badly designed and poorly carried out” from an internal report by Pusztai that contained no such details. The Royal Society had never considered, or even asked for, a copy of the original research proposal of 1995. This omission was further compounded by the Royal Society’s unwillingness to take up Pusztai’s offer of full cooperation. Moreover, as crucial details of the histological findings were never divulged to them, it is more than perplexing that the Royal Society’s unnamed experts were so emphatic in their condemnation of the GM-potato experiments.

The unsolicited report of the Royal Society, produced by clandestine “peer review”, is deprecable, because many influential committees are redolent with advisers linked to biotechnology companies. The commercial prevarication that impedes scientific debate is well illustrated by the experience of Eric Brunner and Erik Millstone3 and we strongly commend their support for openness in the regulatory process for new foods.

After the US Food and Drug Administration’s (FDA) and various biotechnology companies’ exhaustive safety studies, only one publication on feeding GM soya to animals has been published up to the beginning of 1999.4 Lachmann claims that “there is no experimental evidence or any plausible mechanism by which the process of genetic modification can make plants hazardous to human beings”, although it now seems that the FDA has overriden its own safety experts. It would be helpful if such authoritative opinions were supported by published results of biological, nutritional, and immunological testing with mammals before introduction into the human diet.

Scant attention has been given to people with abnormal digestion as a result of chronic gastrointestinal disease. The widespread mucosal accessibility to food viral DNA, a hot spot of DNA recombination, could allow unexpected enhancement of intercurrent viral infection. Similarly, in countries where HIV-1 infection is endemic, the assumption that a viral component of GM food is harmless maybe misplaced.

Few would question the well meaning sentiments of your correspondents but other equally valid opinions do not agree with the view that the GM route is the only salvation for mankind. We hope that your correspondents are correct about the health prospects of the millions of Americans and Chinese who have been consuming untested but assuredly “safe” GM food for years. In the UK, nobody can be completely certain whether or not they have consumed GM foods and overseas consumers cannot be declared unaffected until chronic symptoms are identified, collated, and published.

Seeds of Death Unveiling The Lies of GMO’s

We Wont Get Fooled Again

Please visit the FACEBOOK page http://www.facebook.com/WeWontGetFool…
Genetic engineering is a process where scientists take genes from one species and force it into the DNA of other species. Every single independent study conducted on the impact of of genetically engineered food damage organs, it caues infertility, it causes immune system failure, it causes holes in the GI tract, it causes multiple organ system failure….Monsanto’s the company that told us that PCBs were safe…they told us that Agent Orange was safe, they told us that DDT was safe. And now they’re in charge of telling us that their own genetically engineered food is safe, because the FDA doesn’t require a single safety study; they leave it to Monsanto.

The leaders of Big Agriculture–Monsanto, DuPont, Syngenta–are determined that world’s populations remain ignorant about the serious health and environmental risks of genetically modified crops and industrial agriculture. Deep layers of deception and corruption underlie both the science favoring GMOs and the corporations and governments supporting them.
This award-winning documentary, Seeds of Death, exposes the lies about GMOs and pulls back the curtains to witness our planet’s future if Big Agriculture’s new green revolution becomes our dominant food supply.

Documentary by Jeremy Seifert, 2013, USA, 90′
https://www.facebook.com/gmoomgfilm
Today in the United States, by the simple acts of feeding ourselves, we are unwittingly participating in the largest experiment ever conducted on human beings. Each of us unknowingly consumes genetically engineered food on a daily basis. The risks and effects to our health and the environment are largely unknown. Yet more and more studies are being conducted around the world, which only provide even more reason for concern. We are the oblivious guinea pigs for wide-scale experimentation of modern biotechnology.
GMO OMG tells the story of a father’s discovery of GMOs in relationship to his three young children and the world around him.
We still have time to heal the planet, feed the world, and live sustainably. But we have to start now!

The Top Censored Stories of 2014 | Interview with Mickey Huff

The African Historical Graphics Archive is designed to record, conserve and present historical maps and graphic images of Africa and its peoples for advanced scholarship, public exhibition and curriculum development on African history throughout the world.

For background material on problems of meta-description in the electronic cataloging of digital material see: 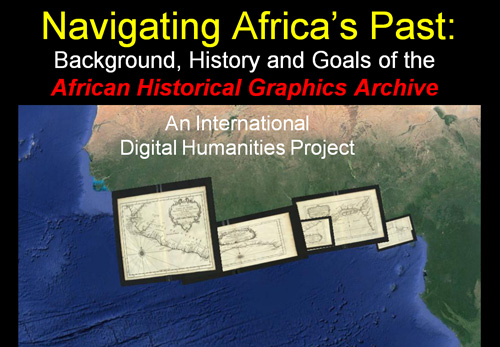 as well as selected related topics in the digital humanities:

People of European descent form the bulk of the population in most of the temperate zones of the world – North America, Australia and New Zealand. The military successes of European imperialism are easy to explain; in many cases they were a matter of firearms against spears. But as Alfred Crosby explains in his highly original and fascinating book, the Europeans’ displacement and replacement of the native peoples in the temperate zones was more a matter of biology than of military conquest.