What Now? What’s Next? Envisioning the Transition to a Sustainable World | EV & N – 163 – CCTV 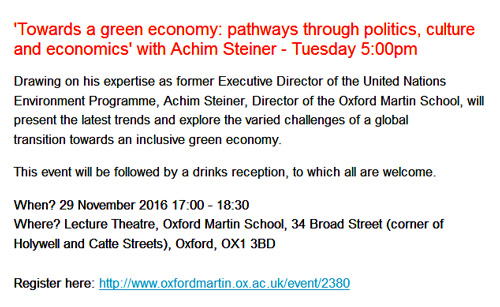 Drawing on his expertise as former Executive Director of the United Nations Environment Programme, Achim Steiner, Director of the Oxford Martin School, will present the latest trends and explore the varied challenges of a global transition towards an inclusive green economy.

This event will be followed by a drinks reception, to which all are welcome

If you cannot attend in Oxford, click here to view event online.

Transition studies focuses on how to move from where we are to where we need to be to survive the Anthropocene.

and further information is available through the:

“It always seems impossible until it is done.”

Nelson Mandela inspired all of us with his courage, his unyielding resistance, and his grace. Inspired by Mandela’s vision, climate activists from around the world helped make this video last June during the Global Power Shift convergence organized by 350.org.

America’s Lawyer Mike Papantonio, Ring of Fire Radio, joins Thom Hartmann. If you’ve ever seen any studies claiming to “debunk” global warming or “proving” that cigarettes don’t cause cancer – then you may have the scientists funded by private business to thank.

In major climate divestment news, the Rockefeller family, which made their vast fortune on oil, has announced it will begin divesting from fossil fuel companies. The heirs of Standard Oil tycoon John D. Rockefeller are joining a growing movement of institutions and wealthy individuals who are pledging to divest from oil, coal and natural gas companies.

Senator Bernie Sanders shares a Think Progress piece that looks at how little coverage the major networks give to stories about money in politics.

Speaking at the People’s Climate March in New York City, independent Senator Bernie Sanders discusses a potential 2016 presidential run and how getting money out of politics is critical to addressing the climate crisis. “[President Obama] can and should do more,” Sanders says. “But the major impediment right now is not Obama, it is the Republican Party. We have to call them out on this. We don’t do it enough. These are people who do not even acknowledge the scientific reality because they are beholden to Big Energy money and the Koch brothers.”

One day after the largest climate march in history in New York City, protesters rallied near Wall Street on Monday to highlight the financial industry’s role in fueling industries responsible for the air pollution that is causing global warming and climate change. The action came ahead of the one-day United Nations Climate Summit today, where leaders from 125 countries will take part in the first high-level climate talks since Copenhagen nearly five years ago. Dubbed “Flood Wall Street,” hundreds of protesters dressed in blue held a rowdy sit-in on Broadway just blocks from the U.S. Stock Exchange. The demonstrators occupied the street for more than eight hours until police began arresting some 100 people. Democracy Now! was in the streets to cover the action.

Kumi Naidoo of Greenpeace on the Global Climate Uprising

The People’s Climate March, which saw hundreds of thousands around the world take to the streets for action on global warming in New York City, was followed this week by a United Nations climate summit in which world leaders advanced an agenda devoid of binding commitments. Kumi Naidoo, executive director of Greenpeace International talks about the global climate week and what comes next.

Two days after the largest People’s Climate March in history, more than 120 world leaders gathered in New York City for a one-day United Nations climate summit. Tuesday’s meeting took place ahead of the larger, 200-nation summit in Paris in 2015, when delegates will attempt to finalize an agreement to reduce global greenhouse gas emissions. In a series of speeches, world leaders made nonbinding agreements to slow global warming and keep the rise in ocean temperatures below two degrees. Several leaders from the most carbon-polluting nations skipped the climate summit, including China, India and Russia. In one commitment to come out of the summit, more than 30 countries set a deadline to end deforestation by 2030. If successful, this could reduce carbon emissions by an estimated eight billion tons per year — the equivalent of emissions by all of the world’s one billion cars. But Brazil, which has the largest continuous rainforest in the world, refused to sign on, saying the plan conflicts with its own laws and targets.