Naomi Klein, author of This Changes Everything: Capitalism vs. The Climate, breaks down the history of political inaction around the climate that has brought us to the point of crisis and the visionary framework social movements need to usher in an economy that is both democratic and regenerative.

Fears Ebola Outbreak ‘Beyond Our Capability to Contain’

Each day brings with it new warnings about the deadly Ebola outbreak already blamed for killing more than 2,600 people across West Africa. And while countries and international organizations like the United Nations are starting to come through on promises of help for those most affected, the unprecedented speed with which the virus has spread is raising questions about the international response. VOA’s Jeff Seldin has more from Washington.
Originally published at – http://www.voanews.com/media/video/fe…

Nuke the moon: CIA’s real life plan to cause moonquakes….

Plans to establishing subterranean army bases, steal rockets and cause moonquakes using nuclear weapons were recently unveiled in newly declassified government documents. Part of the US’ effort to catch up to and overtake Russia in the Cold War era space race, some of these plans actually became a reality. RT’s Ameera David takes a look.

Speaking Truth to Power – and to Friends | James Hansen

Once when I was giving a public talk at the Commonwealth Club in San Francisco, where I was about to be presented an award by Governor Brown, who was sitting in the front row, I described California’s newly minted cap-and-trade program as “half-baked” and “half-assed”. I admit to being tactless, but it got his attention, which was my intention.

Golden Opportunities. Governor Brown is a smart man. Based on our discussions over dainties before my talk and another discussion after the ceremony, I believe he may realize that he missed a golden opportunity. California is one place that could have demonstrated an approach to the energy & climate problem that could have a huge national and global impact.

Ahead of the UN Secretary-General Ban Ki-moon’s Climate Summit at the United Nations to spur climate action and facilitate a global climate agreement in 2015, nearly 350 global institutional investors representing over $24 trillion in assets have called on government leaders to provide stable, reliable and economically meaningful carbon pricing that helps redirect investment commensurate with the scale of the climate change challenge, as well as develop plans to phase out subsidies for fossil fuels. 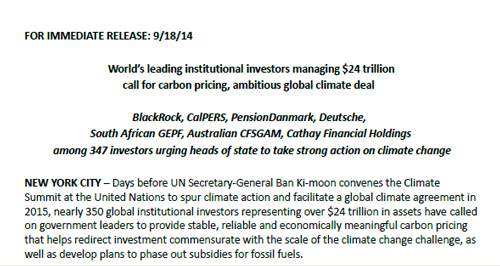 Photo: Anneli L. Tostar
In a public statement to Nicholas D. Kristof (Harvard ’81) this week, Harvard’s President continued to reject the demands of the Harvard Divest campaign of students, faculty and alumni.  With the largest endowment of any private university in the country, Harvard has refused to take a public stance to divest its endowment funds from the fossil fuel industries.  If the University President refuses to consider this issue at this point, perhaps Harvard’s senior financial officers may want to consider the related news in this domain which is now being widely discussed internationally:

Harvard has refused to be a leader in these matters, but perhaps it can learn to be a gracious follower.

Thousands of people have defied Sierra Leone’s three-day lockdown to combat the Ebola virus by crossing the border into Guinea without going through health controls.

Streets in the capital of Sierra Leone are deserted, as the country continues it’s three-day lockdown to check the spread of Ebola virus. Although the majority of Sierra Leoneans are cooperating, some have fled to neighbouring Guinea in fear of being taken into isolation. Maria Galang reports