We can no longer ignore feedbacks between global warming and how people respond, say Paul I. Palmer and Matthew J. Smith. 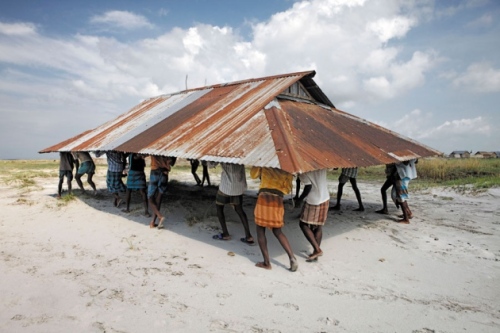 Residents in the flood-prone district of Kurigram, Bangladesh, move a community mosque to safer ground.

Current models of Earth’s climate capture physical and biophysical processes. But the planet has entered a new state: humans are adapting to, as well as causing, environmental changes. This major feedback must be modelled. Projections of the future climate based on simple economic narratives1 — from cuts in greenhouse-gas emissions to unmitigated growth — are unrealistic.

Faced with droughts and rising sea levels, people alter their behaviour. Even if global climate policy is effective, and nations deliver on ambitious green-energy-production and sustainability targets, societies will be different in a warmer world. People will move to places that are richer in resources, or stay where they are and be pushed further into poverty. Population growth, urbanization, migration2 and conflict3 will compound reactions to global temperature rises.