http://foodsecurity.dupont.com/
In an ongoing effort to advance food security, DuPont has commissioned an innovative Global Food Security Index, developed by the Economist Intelligence Unit. The index not only provides a worldwide perspective on food security, it measures vulnerabilities at the root level, in over 100 countries.

Measuring Global Progress Toward Food and Nutritional Security: The State of Food Security

http://foodsecurity.dupont.com/ag-inn…
The Advisory Committee on Agricultural Innovation & Productivity released its 2014 report, titled “Measuring Global Progress Toward Food and Nutrition Security” on May 20th, 2014. The updated report examines agricultural sustainability, biotechnology, improved trade policies, the role of women and youth in agriculture, as well as food loss and waste. In this video, Thomas A. Daschle of DLA Piper, Mpule Kwelagobe of Mpule Foundation of Endogenous Development, and James C. Borel of DuPont discuss the biggest changes and developments related to food and nutrition security.

24 Hours of Reality: 24 Reasons for Hope

http://24hoursofreality.org Join us on September 16th & 17th, 2014 as we share 24 reasons to be hopeful about solving the climate crisis.

It’s one of the most oft-used arguments put forth by climate deniers: that there has been “no global warming” for the last 17 years, as evidenced by a supposed lack of increase in global average surface temperature.

It’s also one of the most oft-debunked, as overwhelming evidence has shown that most of the heat generated from increased carbon emissions gets absorbed into the ocean, not into the atmosphere. What’s more, scientists believe global temperatures are set to rise rapidly in the face of our increasingly warm and acidic oceans.

Still, the idea that warming has been absorbed more and more by the ocean and not as much by the atmosphere has presented a good question for scientists: Why? Why, even as greenhouse gases have continued to concentrate in our atmosphere, have global air surface temperatures remained somewhat steady for the last several years? And where in the ocean has that heat actually gone?

The answer, according to a study published in the journal Science on Friday, is that much of the heat missing from the atmosphere has been stored deep in the Atlantic Ocean, drawn in by a once slow-moving current that seems to have sped up in the beginning of the 21st century. The sped-up current has been able to pull down heat almost a mile into the ocean, according to the paper’s authors, oceanographer Xianyao Chen of the Ocean University of China and atmospheric scientist Ka-Kit Tung of the University of Washington.

Because of the sped-up current, Chen and Tung say that the North and South Atlantic oceans have been storing more energy than the rest of the world’s oceans combined since the year 2000.

“We found the missing heat,” Chen said, according to a research article published alongside the study in Science. 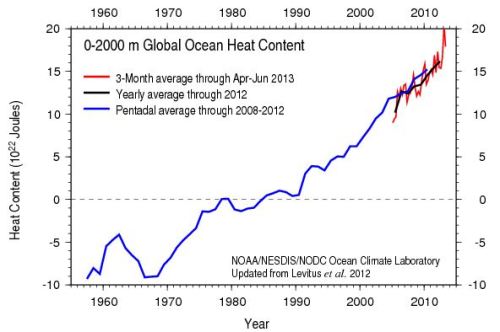 A NOAA chart shows changes in the heat content of the world’s oceans above 2000 meters since about 1960.

The study does note that changes in the current of the Atlantic Ocean have always happened, and have always affected the temperature of the earth. Before global warming was a factor, though, the changes used to even things out — 30 warm years, followed by 30 cooler years, and so on.