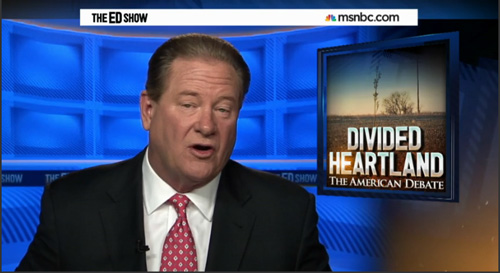 Last summer, President Obama delivered a major climate speech in which he laid out his plan to reduce greenhouse gas emissions by 17 percent by 2020. He also committed to deciding the fate of the Keystone XL pipeline based on its climate impacts, stating unequivocally: “The net effects of the pipeline’s impact on our climate will be absolutely critical to determining whether this project is allowed to go forward.” 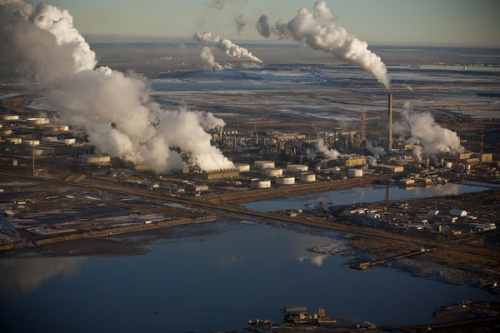 While the evidence shows that Keystone XL would result in significant greenhouse gas emissions and should be denied in its own right, it is only one of many proposed tar sands pipelines on the Obama administration’s desk. The State Department is currently preparing an environmental impact statement (EIS) for an expansion of Enbridge’s Alberta Clipper pipeline, which would increase its capacity to over 800,000 barrels per day (bpd)—roughly the same size as Keystone XL. An expansion of Enbridge’s Line 3 would transport up to 760,000 bpd of tar sands crude through the Great Lakes region; and a reversal of the Portland-Montreal Pipeline could bring up to 600,000 bpd through New England.

Because the tar sands deposits are landlocked in Alberta, the oil industry needs these pipelines to carry tar sands crude to U.S. refineries and overseas markets. Each one is a key part of the industry’s plan to triple tar sands development to around six million bpd by 2030. Without these pipelines, much of the high-carbon tar sands would stay in the ground.

Last week, the Sierra Club and allies urged the State Department to evaluate the cumulative climate impacts of these pipelines as part of its Alberta Clipper EIS. The National Environmental Policy Act (NEPA) requires an analysis of the cumulative environmental impacts of a proposed project combined with other past, present and reasonably foreseeable projects. Federal courts recognize that “the impact of greenhouse gas emissions on climate change is precisely the kind of cumulative impacts analysis that NEPA requires.”

In a recent decision, a court rejected federal agencies’ attempts to downplay the climate impacts of permitting a coal mine based on the reasoning that other coal would be mined and burned regardless of their decision.

Thom Hartmann on Economic & Labor News for the week of August 18, 2014

Apocalypse of the “Happy Meal”: Worshiping the Golden Calf 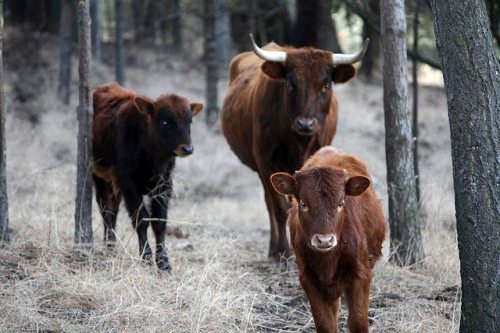 A cattle ranch in Montana – Throughout the world, native grasslands, forests and wild species have been burned, butchered and brutalized for cattle ranches. (Photo: Simon Davidson)

Truthout readers like you made this story possible. Can you help sustain our work with a tax-deductible donation?

Rational, reasonably well-educated and intellectually honest people (obviously that excludes 40 percent of the country and all the Republicans on Capitol Hill) know that the looming climate crisis threatens modern civilization, if not humankind as a species. Ironically, while humans’ accelerating abuse of our planet is now widely recognized as responsible for the sixth great massive species extinction since the earth was formed, we are rapidly setting the table for our own mass extinction, and due in large part to – what we are setting on our tables.

TransCanada, Exxon Mobil, the Koch brothers and Fox News are widely demonized as the enemies of meaningful action on the climate crisis. No argument there, and given that their obstructionism will lead to misery and death for billions of people, why are we not putting them on trial for crimes against humanity? But for far too long what we eat, the corporations that produce what we eat and entice us and our kids to want what they produce, have continued to operate in our climate blind spot. McDonald’s, Burger King, Wendy’s, Coca-Cola, Kraft and the entire “processed, fast food” empire are just as guilty as Peabody Coal of leading us to our own extinction. “Happy Meals” may eventually become our last meals.

As the countries of the tropics become increasingly integrated into the global economy, and there is steadily increasing demand for ever-limited natural resources, efforts to protect the region continue to be undermined by unsustainable economic demands.

Throughout the world, native grasslands, forests and wild species have been burned, butchered and brutalized for cattle ranches.

Wholesale exploitation and destruction of soil, water and vegetation in order to provide cheap beef to the developed world is wreaking havoc on the ecosystems that sustain all life, including human life. Cliven Bundy’s unpaid cattle grazing bills from the US Bureau of Land Management (BLM) don’t even scratch the surface of the damage that his and other ranchers’ cattle do to the environment.

This talk was given at a local TEDx event, produced independently of the TED Conferences. In the midst of the heat of the climate change debate and the chill of winter storms, humans are learning about the natural phenomena and workings of other planets, thus gaining perspective on their own. We live long enough to notice our climate change over decades, but changes on timescales of tens of thousands of years require a geologic eye. Other planetary objects, like our near neighbor Mars, or Saturn’s enigmatic Moon Titan, are natural laboratories for scientists to examine such changes in a broader context. Spacecrafts probing these objects offer a glimpse of worlds with changing atmospheric dynamics, waxing and waning polar caps, histories of seas now gone, and complex orbits that influence conditions at the surface in surprising ways. In his talk Oded describes the evidence for climate change on other planets, and attempts to add perspective to planet Earth’s place within these worlds.

Oded Aharonson is a professor of planetary science at the Weizmann Institute of Science. Aharonson’s research focuses on planetary geology, geophysics and dynamics. He is a member of many spacecraft investigations of solar system bodies, including the Mars Exploration Rovers, the Mars Reconnaissance Orbiter, the Lunar Reconnaissance Orbiter, and the Cassini mission to Titan. He was also the Mission Scientist for the first Israeli mission to the Moon, SpaceIL. He received his bachelor’s and master’s degrees in applied and engineering physics from Cornell University, served in the Israeli Air Force, and after earning a PhD from MIT (2002), served as a professor at Caltech for a decade. Recently Aharonson returned to Israel and directs the Center for Planetary Science established at Weizmann.

From Ferguson to Africa: The Tentacles of Institutional Racism

It is not only in Ferguson, MO where state-sanctioned and institutional racism is being exposed. This new report demonstrates how the majority white UK is trying to convince Africans to grow and eat dangerous genetically engineered crops that have been rejected in Britain and the European Union.

The report notes, “Accordingly there are a various projects under way to develop new GM varieties for African farmers, ranging from drought-resistant maize to varieties of cassava, banana, sorghum, cowpea and sweet potato with resistance to pests and disease.”

Mercifully the report’s release has been low-key in the UK, where the long-suffering public must be tired of hearing rich white Brits telling Africans that they should grow and eat experimental GM crops on the basis of no evidence that they will be beneficial.

It is, however, being publicised in Africa.

This Changes Everything: Capitalism vs. The Climate: Naomi Klein 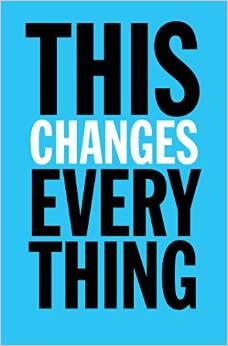 The most important book yet from the author of the international bestseller The Shock Doctrine, a brilliant explanation of why the climate crisis challenges us to abandon the core “free market” ideology of our time, restructure the global economy, and remake our political systems.

In short, either we embrace radical change ourselves or radical changes will be visited upon our physical world. The status quo is no longer an option.

In This Changes Everything Naomi Klein argues that climate change isn’t just another issue to be neatly filed between taxes and health care. It’s an alarm that calls us to fix an economic system that is already failing us in many ways. Klein meticulously builds the case for how massively reducing our greenhouse emissions is our best chance to simultaneously reduce gaping inequalities, re-imagine our broken democracies, and rebuild our gutted local economies. She exposes the ideological desperation of the climate-change deniers, the messianic delusions of the would-be geoengineers, and the tragic defeatism of too many mainstream green initiatives. And she demonstrates precisely why the market has not—and cannot—fix the climate crisis but will instead make things worse, with ever more extreme and ecologically damaging extraction methods, accompanied by rampant disaster capitalism.

Klein argues that the changes to our relationship with nature and one another that are required to respond to the climate crisis humanely should not be viewed as grim penance, but rather as a kind of gift—a catalyst to transform broken economic and cultural priorities and to heal long-festering historical wounds. And she documents the inspiring movements that have already begun this process: communities that are not just refusing to be sites of further fossil fuel extraction but are building the next, regeneration-based economies right now.

Can we pull off these changes in time? Nothing is certain. Nothing except that climate change changes everything. And for a very brief time, the nature of that change is still up to us.

The Global Warming Reader: A Century of Writing About Climate Change: Bill McKibben 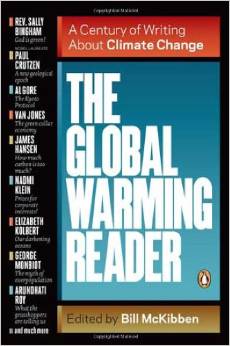 Our most widely respected environmental writer brings together the essential voices on global warming, from its 19th-century discovery to the present

With the rise of extreme weather events worldwide–witness the devastation wrought by Hurricanes Sandy, Irene, and Katrina, and the sustained drought across the American West–global warming has become increasingly difficult to deny.

What is happening to our planet? And what can we do about it? The Global Warming Reader provides more than thirty-five answers to these burning questions, from more than one hundred years of engagement with the topic. Here is Elizabeth Kolbert’s groundbreaking essay “The Darkening Sea,” Michael Crichton’s skeptical view of climate change, George Monbiot’s biting indictment of those who are really using up the planet’s resources, NASA scientist James Hansen’s testimony before the U.S. Congress, and clarion calls for action by Al Gore, Arundhati Roy, Naomi Klein, and many others. The Global Warming Reader is a comprehensive resource, expertly edited by someone who lives and breathes this defining issue of our time.