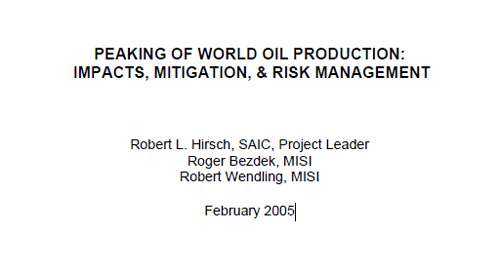 The peaking of world oil production presents the U.S. and the world with an
unprecedented risk management problem. As peaking is approached, liquid fuel
prices and price volatility will increase dramatically, and, without timely mitigation,
the economic, social, and political costs will be unprecedented. Viable mitigation
options exist on both the supply and demand sides, but to have substantial
impact, they must be initiated more than a decade in advance of peaking.

In 2003, the world consumed just under 80 million barrels per day (MM bpd) of
oil. U.S. consumption was almost 20 MM bpd, two-thirds of which was in the
transportation sector. The U.S. has a fleet of about 210 million automobiles and
light trucks (vans, pick-ups, and SUVs). The average age of U.S. automobiles is
nine years. Under normal conditions, replacement of only half the automobile
fleet will require 10-15 years. The average age of light trucks is seven years.
Under normal conditions, replacement of one-half of the stock of light trucks will
require 9-14 years. While significant improvements in fuel efficiency are possible
in automobiles and light trucks, any affordable approach to upgrading will be
inherently time-consuming, requiring more than a decade to achieve significant
overall fuel efficiency improvement.

Besides further oil exploration, there are commercial options for increasing world
oil supply and for the production of substitute liquid fuels: 1) Improved Oil
Recovery (IOR) can marginally increase production from existing reservoirs; one
of the largest of the IOR opportunities is Enhanced Oil Recovery (EOR), which
can help moderate oil production declines from reservoirs that are past their peak
production: 2) Heavy oil / oil sands represents a large resource of lower grade
oils, now primarily produced in Canada and Venezuela; those resources are
capable of significant production increases;. 3) Coal liquefaction is a well established
technique for producing clean substitute fuels from the world’s
abundant coal reserves; and finally, 4) Clean substitute fuels can be produced
from remotely located natural gas, but exploitation must compete with the world’s
growing demand for liquefied natural gas. However, world-scale contributions
from these options will require 10-20 years of accelerated effort.

Sold to the Sea: Human Trafficking in Thailand’s Fishing Industry

Thailand’s seafood exports are the third most valuable in the world, supplying markets in the US, Europe and Asia but far from the attention of consumers vulnerable migrants in search of a better future are being trafficked, exploited, abused and even murdered aboard Thai fishing vessels. EJF’s investigation exposed the brutal trade in modern-day slaves. To read the full report, please visit ejfoundation.org

To find out more, visit www.ejfoundation.org/oceans

To find out more, visit www.ejfoundation.org/oceans

What Does Home Mean to You?

Join our call to action to the United Nations Human Rights Council to adopt a new mandate for a special rapporteur on climate change and human rights.

Is Baltimore City’s Water Supply Up For Privatization?

City Hall denies the charge, but workers and advocates say an upcoming water contract could be a foot in the door for privatization

The Climate Reality Leadership Corps is a global network of activists committed to taking on the climate crisis and solving the greatest threat humanity has ever faced. The program takes great leaders and makes them exceptional, providing the training in climate science, communications, and organizing to tell the story of climate change and inspire communities everywhere to take action.

The result is a dynamic group of world-changers shaping the conversation on climate in forums from family dinners to international summits and building a 21st-century movement for solutions.

Sign up now to stay updated on future trainings.