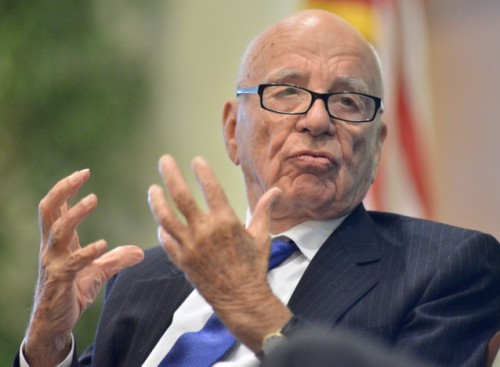 Rupert Murdoch is chairman and CEO of News Corporation, one of the world’s largest media conglomerates, which includes Fox News and The Wall Street Journal. Since launching The Australian newspaper 50 years ago he has also become one of the richest people in the world. In a wide-ranging interview aired Sunday in Australia to mark this 50-year anniversary, Murdoch reflected candidly on climate change, saying he thought it should be approached with great skepticism.

“At the moment the north pole is melting but the south pole is getting bigger,” he said. “Things are happening. How much of it are we doing, with emissions and so on? As far as Australia goes? Nothing in the overall picture.”

While Antarctica has been losing ice more slowly than the Arctic, and the geopolitical implications are less salient, studies show that parts of the massive continent’s ice sheet have entered irreversible decline and that melting is likely to accelerate.

Australia is one of the most greenhouse gas intense economies in the world, relying heavily on coal exports. The country passed a carbon price in 2011 but since last year the conservative government led by Murdoch-supported prime minister Tony Abbott has been trying to repeal it. The latest attempt ended in disarray last week after several senators rebelled at the last minute.

Murdoch said that if temperatures rose under the worst case scenario 3C (5.4F) over the next 100 years ”at the very most one of those [degrees] would be manmade.”

He did not explain this back-of-the-envelope calculation. Or that average global temperatures could increase by as much as 11.5°F by 2100, depending on the level of future greenhouse gas emissions, according to recent climate models. A recent study found that temperatures are likely to rise by at least 4C by 2100, twice the level deemed safe and an outcome that would lead to widespread devastation.

This would be especially harmful along coastlines, where much of the world’s population lives. Murdoch addressed this issue saying ”If the sea level rises six inches, that’s a big deal in the world, the Maldives might disappear or something, but OK, we can’t mitigate that, we can’t stop it, we have to stop building vast houses on seashores.” 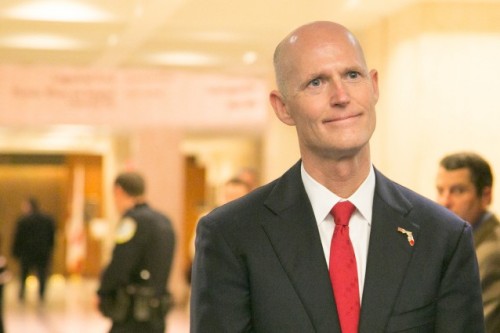 If you’re not a scientist, presumably you should listen to people who are when grappling with climate change.

That is the logic, at least, of a group of scientists who sent Florida Governor Rick Scott (R) a letter on Tuesday requesting a meeting so they can explain to him the science of climate change. The Tampa Bay Times reported that ten prominent scientists, including professors at the University of Miami, Florida State, Florida International and Eckerd College, signed the letter, which read in part “it is crucial for policymakers, such as yourself, to have a full understanding of the current and future threats to Florida.”

In his initial 2010 campaign, Scott replied “I have not been convinced” when asked if he believes in global warming. And as the letter noted, the Governor has since settled into a common pattern among Republicans whenever pressed on the issue of climate change, simply responding with “I’m not a scientist.”

“We are scientists,” the letter continued. “And we would like the opportunity to explain what is at stake for our state.”

“Those of us signing this letter have spent hundreds of years combined studying this problem, not from any partisan political perspective, but as scientists — seekers of evidence and explanations. As a result, we feel uniquely qualified to assist you in understanding what’s already happening in the climate system so you may make the most effective decisions about what must be done to protect the state, including reducing emissions from fossil fuel burning power plants.”

“I just want him to understand what the situation is — and put it in a historical, million-year context, about what the greenhouse gas history is,” Chanton told the Times, pointing to ice core data that shows the Earth plowing through vast temperature extremes over its multimillion-year history, rising whenever the concentration of carbon dioxide in the atmosphere increased, and falling when it decreased. But those concentrations also never ranged outside of 180 to 280 parts per million (ppm). Today, carbon dioxide in the atmosphere stands at 400 ppm.

Big Weather and Coastal Cities: Resilience in the Face of Disaster

In the wake of Hurricane Sandy, this Forum event explored how people and cities rebound from devastating natural disasters and how they prepare for new catastrophes. With millions of people living in coastal cities, coupled with changing weather patterns, natural disasters present significant public health and policy implications — from managing crises, to safeguarding infrastructure, to bolstering and leveraging the resilience of people and cities. This Forum event was presented in collaboration with The Huffington Post.

Watch the entire series from The Forum at Harvard School of Public Health at www.ForumHSPH.org.

In election year 2012, the U.S. Congress will be considering a new Farm Bill, the government’s primary means of setting food and agriculture policy. The current Farm Bill has been criticized by public health experts for subsidizing crops used in ingredients — such as high-fructose corn syrup — in unhealthy foods. At the same time, the bill helps fund food assistance programs in the U.S., making food — healthy or otherwise — more affordable for many Americans. Amid calls for federal budget cuts, this Forum webcast focused on the implications for feeding the nation when politics, economics and nutrition collide.

Watch the entire series of The Forum at HSPH at http://www.ForumHSPH.org

Libyan Sahara Water from the Desert – The Secrets of Nature

The Secrets of Nature

“Bahr Belá Má”, “Waterless Sea”, as the Sahara is called by the Bedouins. But deep beneath the dune fields and stone deserts expands an immeasurable reservoir of water resources. Using enormous technical resources, the Libyans have begun to extract fossil reserves of groundwater. Following oil, water is now arousing a new wave of euphoria. In the present desert climate, reserves are only being partally replaced and what has collected over a period of millions of years may be used up in only a few decades.

How The Sahara Desert Was Made – Documentary

How The Sahara Desert Was Made – Documentary 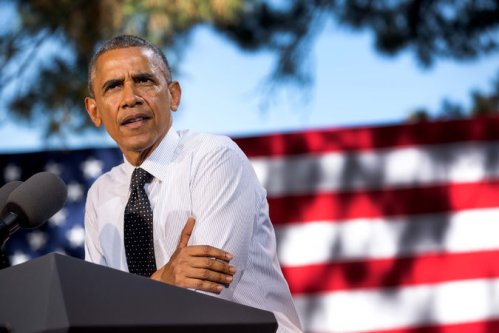 The actions, involving a variety of federal agencies, were among the recommendations of the president’s State, Local and Tribal Leaders Task Force on Climate Preparedness, a group of 26 officials who have worked since November to develop the proposals.

One of the projects involves shoring up the power supply during climate catastrophes, and the Department of Agriculture on Wednesday will award $236.3 million to improve electricity infrastructure in the rural areas of eight states. A government study released in May concluded that climate change will strain utility companies’ ability to deliver power as extreme weather damages power lines and hotter temperatures drive surges in demand.

http://www.democracynow.org – A new investigation by The Crime Report published Monday documents how corporations almost never face criminal investigations for violating environmental laws such as the Clean Air Act and the Clean Water Act. A survey of environmental violations tracked by the Environmental Protection Agency shows just one-half of one percent of them trigger criminal prosecution. Joining us to describe his investigation, The Crime Report’s Graham Kates describes how one company, Alpha Natural Resources, faced only civil fines after it racked up more than 6,000 violations between 2007 and 2013. Kates say prosecutions are hampered by limited government resources in pursuing corporate polluters. The EPA has just 200 agents nationwide, and the Environmental Crime section of Department of Justice has just 38 prosecutors.

http://www.democracynow.org – The government has unveiled federal terrorism charges against two animal rights activists accused of helping to free minks and foxes from fur farms in rural Illinois. In newly unsealed indictments, the prosecutors accuse Tyler Lang and Kevin Oliff of freeing about 2,000 mink from their cages on a fur farm, and then removing parts of the fence surrounding the property so the mink could escape. The activists are also accused of spray painting “Liberation is Love” on the farm’s walls. Lang and Oliff have been indicted under the controversial Animal Enterprise Terrorism Act (AETA), which each count carrying a maximum penalty of five years in prison and a $250,000 fine. We are joined by reporter Will Potter, who covers animal rights and environmental issues at GreenIstheNewRed.com. “It really doesn’t matter how you feel about animal rights groups, or about these alleged crimes of stealing animals,” Potter says of the AETA, which he argues is too broad while criminalizing protests and civil disobedience. “This is really about a corporate campaign to demonize their opposition and to use terrorism resources to shut down a movement.” Potter also discusses his wildly successful Kickstarter campaign to purchase a drone for use in photographing abuses at factory farms.

This video is an excerpt from the Democracy Now! interview. Watch the full segment here: http://www.democracynow.org/2014/7/15…