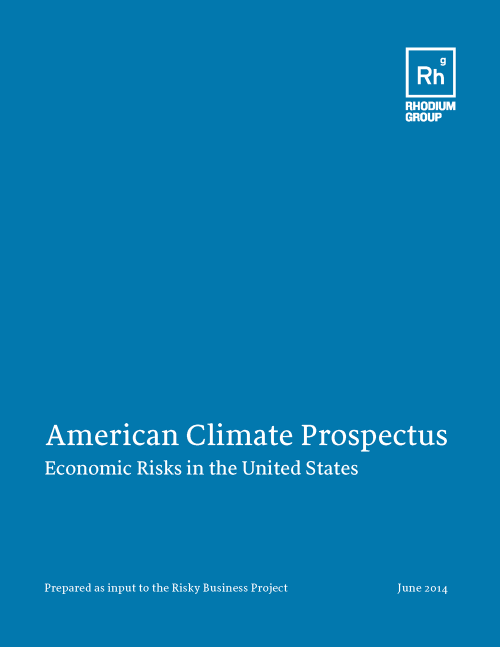 The United States faces a range of economic risks from global climate change — from increased flooding and storm damage, to climate-driven changes in crop yields and labor productivity, to heat-related strains on energy and public health systems. The American Climate Prospectus (ACP) provides a groundbreaking new analysis of these and other climate risks by region of the country and sector of the economy. By linking state-of-the-art climate models with econometric research of human responses to climate variability and cutting edge private sector risk assessment tools, the ACP offers decision-makers a data driven assessment of the specific risks they face.

Damages from storms, flooding, and heat waves are already costing local economies billions of dollars—we saw that firsthand in New York City with Hurricane Sandy. With the oceans rising and the climate changing, the Risky Business report details the costs of inaction in ways that are easy to understand in dollars and cents—and impossible to ignore.

The U.S. economy faces great risks from climate change, according to a new study that focuses on the current and future effects of climate change on everything from jobs, to crop yields, to energy production.

Though the study presents no new climate science, it paints a dire picture of the business and economic effects if action isn’t taken, including crop yields that fall by more than 70 percent in the Midwest and billions of dollars’ worth of property literally underwater on the East Coast.

Paulson, a Republican, acknowledges that many in his party are skeptical of the science of climate change and want more research. He says this new study suggests the business and investment community needs to take action.

“It’s going to increasingly be difficult for anybody, regardless of party, to say there isn’t a problem,” he says.

Paulson says he hopes the study can influence the business community by applying a major business tool — the science of risk management.

“The more we can talk about risk management, which is part and parcel of the free enterprise system and a conservative principle, I think we will make some headway,” Paulson says.

Listen to report and read more

Paulson & Rubin: The costs of the climate crisis 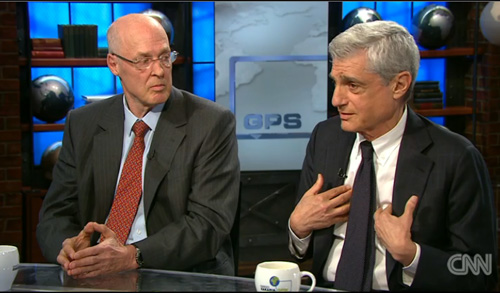 On GPS this Sunday, Fareed speaks with two former treasury secretaries, Henry Paulson and Robert Rubin, about the coming costs of the climate crisis. For more on the issue watch the video clip or read Paulson’s New York Times opinion piece ‘The Coming Climate Crash.’

Then, why might Muqtada al-Sadr’s army be playing spoiler in Iraq, again?

Next, are we reliving 1914? On the 100th anniversary of the assassination that sparked World War I, Fareed explores the geopolitical similarities and differences with former CIA Deputy Director John McLaughlin, author of the recent op-ed ‘How 2014 Is Strikingly Similar to 1914,’ Geoffrey Wawro, author of A Mad Catastrophe: The Outbreak of World War I and the Collapse of the Habsburg Empire, and Walter Russell Mead, professor of foreign affairs at Bard College.

And, introducing a new GPS series: Where America Works. Washington, DC may be broken, but intractable problems are being solved in towns across America. First stop: Houston’s immigration solutions.

The sarcastic bear is loose, and he’s loving every minute of it.

President Barack Obama is letting his inner Don Rickles run free, mocking climate deniers as the crowd who used to think the moon was made out of cheese or spineless dopes who can’t or won’t listen to science even though the science is all overwhelmingly pointing in one direction. Their heads are in the sand. They are members of the Flat Earth Society.

For the White House it’s about getting the liberal base excited for the midterms. It’s a confidence that climate change has shifted in voters’ minds. It’s a broader play against congressional Republicans as obstructionists.

And for Obama, it’s a good time. Wednesday night, Obama ripped into his opponents in front of a League of Conservation Voters crowd so friendly that some were pumping their arms in the air as he spoke.

“It’s pretty rare that you encounter people who say that the problem of carbon pollution is not a problem,” Obama said. “In most communities and workplaces, they may not know how big a problem it is, they may not know exactly how it works, they may doubt they can do something about it. Generally they don’t just say, ‘No I don’t believe anything scientists say.’ Except, where?” he said, waiting for the more than accommodating crowd to call back, “Congress!”

Obama smiled — not his big toothy self-satisfied grin, but his stick-it-in-the-ribs smirk.

“In Congress,” he said. “Folks will tell you climate change is hoax or a fad or a plot. A liberal plot.”

Then, Obama said, there are the people who duck the question. “They say, hey, I’m not a scientist, which really translates into, I accept that man-made climate change is real, but if I say so out loud, I will be run out of town by a bunch of fringe elements that thinks climate science is a liberal plot so I’m going to just pretend like, I don’t know, I can’t read,” Obama said.

Conservatives Don’t Deny Climate Science Because They’re Ignorant. They Deny It Because of Who They Are

For many years, the US National Science Foundation, more recently with the help of the General Social Survey, has asked the public the same true or false question about evolution:”Human beings, as we know them today, developed from earlier species of animals.” And for many years, the responses to this question have been dismal. In 2006, 2008, and 2010, for instance, less than half of the public correctly answered “true.”

In 2012, however, the NSF and GSS conducted an experiment to try to better understand why people fare so badly on this evolution question. For half of survey respondents, the words “according to the theory of evolution” were added to the beginning of the statement above. And while only 48 percent gave the correct answer to the unaltered question, an impressive 72 percent correctly answered the new, prefaced version.

So why such a huge gap? Perhaps the original question wasn’t tapping into scientific knowledge at all; rather, it was challenging the religious identity of creationists who think the earth is less than 10,000 years old. Presented with the new phrasing, however, even many creationists know what the theory of evolution states; they just deny that it is true. So are these people really “scientifically illiterate,” as many in the science world might claim, or are they instead…something else?

Canadian Conservatives Have a New Dire Climate Assessment to Ignore

Natural Resources Canada just released an exhaustive report on Canada’s changing climate—the first since 2008. The report gathers over 1,500 academic, government, and industry sources and is meant to serve as a manual to deal with the present and future realities of climate change. The statistics collected are sobering, acknowledging Canada’s climate has already shifted in a variety of ways and that future change is inevitable.

All of the symptoms of climate change, something Prime Minister Stephen Harper rarely addresses and is frequently accused of ignoring, are on full display in the report.

The annual temperature in Canada has risen 1.5°C since 1950, and the frequency of extreme weather events, both hot and cold, has risen over the same time span. Things are getting wetter, with precipitation up, and arctic permafrost melting. Oceans are rising, about three millimeters per year on the Atlantic side, and our coastal waters are less oxygenated and more acidic. Every single one of those changes is predicted to continue or intensify as climate change progresses.

These changes have already had a variety of negative effects. Over 20 common bird species have seen their populations decline over 50 percent since 1970 due to changing habitat conditions. The Canadian insurance industry has broken payout records in 2011 and 2013 with over $1.7 billion dollars in claims for property damages arising from extreme weather events, a trend that is expected to continue. In fact, just last year Calgary was almost swallowed by a biblical flood.

The report holds that, in the future, few aspects of Canadian life will remain unaffected. Industry will deal with extreme weather and uncertain supply routes, while food producers will face changing habitat conditions and increased disease to crops, all of it tied to warmer weather.

Canada in a Changing Climate: Sector Perspectives on Impacts and Adaptation is a 2014 update to the 2008 science assessment report, From Impacts to Adaptation: Canada in a Changing Climate. During this time period, our understanding of climate change impacts and adaptation in Canada has increased, both as a result of new research and through practical experience. Led by Natural Resources Canada, the development of this report involved over 90 authors and 115 expert reviewers, and synthesized over 1500 recent publications.

The web-accessible report is available below in its full version and by chapter.

Behind the much-publicized report is a much larger 197-page technical document that examines the how, when and where of climate change in the U.S. Some of the impacts outlined are mainstream topics, like agriculture, energy and sea level rise. But others are a little more esoteric, like crime, lost productivity and heat-related deaths. Here are five charts and maps from the technical report that didn’t quite grab headlines, but certainly spotlight the myriad ways climate change will be a drag on the nation’s economy. Each one of them examines the impacts of climate change under a high emissions scenario.

Residents of Detroit, Michigan who are $150 or two months past-due on their water bills are having their water shut off by the bankrupt city. Now, even the United Nations has stepped in, saying Detroit is in violation of the human right to water. FULL STORY: http://on.rt.com/3f1w35