The Return Of Godzilla

A still from the original 1954 film, “Godizilla.” (Toho Co / All Rights Reserved)

The first time Godzilla appeared, in 1954, Japan was still deep in the trauma of nuclear destruction. Hiroshima and Nagasaki was fresh and terrible memories. US nuclear tests in the Pacific had just rained more death down on Japanese fishermen. And here came the monster. Godzilla. The great force of nature from the deep. Swimming ashore. Stomping through Tokyo. Raising radioactive hell. Godzilla came back again and again. In movies and more. Now, maybe Fukushima’s nuclear disaster has roused the beast. It’s back. This hour On Point: the rise and return of Godzilla. 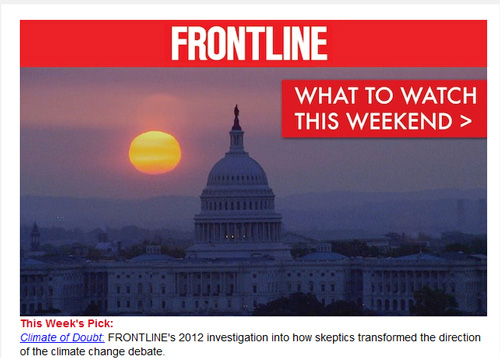 Climate of Doubt: FRONTLINE’s 2012 investigation into how skeptics transformed the direction of the climate change debate.
Why Watch Now?
The federal government released its new U.S. National Climate Assessment this week. The White House described it as “the most comprehensive scientific assessment ever generated of climate change and its impacts across every region of America and major sectors of the U.S. economy.” The report says that climate change is real and it’s here — and conditions will worsen if policymakers and the public do not take action.

Coral Davenport has been investigating what’s behind the change as the energy and environment correspondent for The National Journal. FRONTLINE spoke with her about the dramatic reversal she’s seen in Congress, and what political options are still on the table for those pushing for action on climate change.

Time to Get Real on Climate Change

This week, as the White House issued a landmark report detailing the frightening affects of global warming on our country and President Obama took to the airwaves to drive home that message, Bill Moyers talks with a scientist who has sounded the alarm for decades.

For nearly 35 years, David Suzuki has brought science into the homes of millions on the Canadian television series, The Nature of Things. He has become a godfather of the environmental movement, and in a poll of his fellow Canadians last fall he was named that country’s most admired figure. Nonetheless, his outspoken views on climate change and the government’s collusion with the petrochemical industry in developing Canada’s oil-rich tar sands have made him the target of relentless attacks from his nation’s prime minister, corporations and right-wing ideologues.

“Our politicians should be thrown in the slammer for willful blindness. …I think that we are being willfully blind to the consequences for our children and grandchildren. It’s an intergenerational crime,” Suzuki tells Moyers. 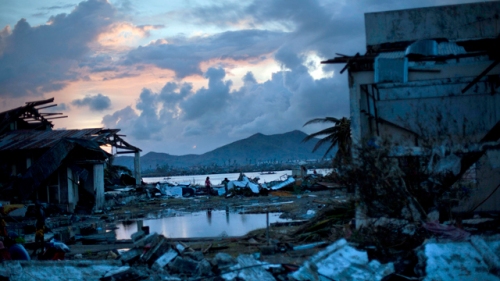 Typhoon Haiyan survivors walk through the ruins of their neighborhood on the outskirts of Tacloban, central Philippines on Wednesday, Nov. 13, 2013. (AP Photo/David Guttenfelder)

The United Nation’s Intergovernmental Panel on Climate Change (IPCC) issued its latest report today. It focuses on how climate change will affect human society in coming years painting a picture of a world destabilized by a rapidly changing environment. While many of the events it details are familiar to those who follow the research on climate change, taken together in the 2,600-page report assembled by more than 300 scientists, they’re almost overwhelming to consider.

The longer we dither about taking action, it warns, the worse the impacts of climate change will be.

Bill Moyers takes on radical-right Republicans for denying the science behind evolution and climate change, showing a video clip of Rep. Paul Broun (R-GA), chairman of oversight and investigations for the Science, Space and Technology Committee of the US House of Representatives, who says evolution is a lie “straight from the pit of hell” and climate change, a hoax.

This essay was originally broadcast with part three of Bill’s interview with Neil deGrasse Tyson on January 24, 2014.

Who’s Getting it Right on Climate Change? 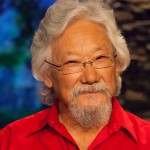 On Moyers & Company this week, environmentalist David Suzuki tells Bill that even as the United States continues to procrastinate tackling climate change, other countries are taking steps toward cutting their emissions and preparing for a more volatile climate future. And in many cases, their efforts have succeeded without the negative economic repercussions that America’s politicians fret over.

The David Suzuki Foundation, a nonprofit group founded by the scientist to research and promote sustainability, gave us a few examples of successful tactics that countries (and a few cities in North America) are using to fight climate change that the US might want to take a closer look at. They note, however, that there “isn’t a country in the world that’s on track to reduce emissions to the extent needed to keep global warming under 2 degrees Celsius (3.7 Fahrenheit)” — the target experts hoped we would meet to avoid the worst effects of climate change.

The National Climate Assessment Says We’re in Trouble. This Chart Shows Why

his animated chart from the Cooperative Institute for Research in Environmental Sciences shows the amount of carbon dioxide in our atmosphere. Note the spike?

Measuring CO2 in parts per million (ppm), the chart shows, first, how the amount of the gas in our atmosphere has increased year-by-year over the past few decades, and then, how dramatic those increases are relative to CO2 levels over the last 800,000 years. (For context, anthropologists believe Homo sapiens started acting like the humans we recognize today, with different languages and cultures and technologies, only about 50,000 years ago.)

Yes, the levels of CO2 in the atmosphere fluctuate naturally over time — but not by this much. Experts have concluded that, to keep the Earth’s climate from spinning out of control, the amount of CO2 in the atmosphere must be kept below 350 ppm. Because of our fossil fuel consumption, we’re now well beyond 400. And, as the National Climate Assessment recently illustrated, we’re starting to feel the effects.

Melting at one of the largest ice caps on Earth has produced a big jump in its flow speed, satellite imagery suggests.

Austfonna on Norway’s Svalbard archipelago covers just over 8,000 sq km and had been relatively stable for many years.

But the latest space data reveals a marked acceleration of the ice in its main outlet glacier to the Barents Sea.

The research was presented in Brussels on Thursday to mark the launch of the EU’s new Sentinel-1a radar spacecraft.

This satellite has been in orbit barely a month but is already being tasked with a range of science observations and other duties.

European Commission officials are keen to showcase the platform’s capabilities before it goes into full service, including what it can do at high latitudes.

The Worst TV News Reactions To The National Climate Assessment

“The Worst TV News Reactions To The National Climate Assessment”

“A hostile climate: Critics cry foul on the President’s climate change agenda,” was how Fox News’ Bret Baier introduced his only segment on the National Climate Assessment (NCA), where he hosted a panel of critics who derided the report. The report — prepared by 300 experts, guided by a 60-member Advisory Committee — was clear that the effects of climate change are here now, impacting the lives and livelihoods of people across the country.

Most cable news coverage of the NCA focused on the contents of the report, and explained clearly to viewers that the U.S. is already dealing with the impacts of climate change, and that they’re only going to get worse. But some took a different tack, ignoring the scientific conclusions and instead questioning whether there were actually any impacts of climate change, or whether it was necessary to take action to mitigate them.

George Will: Climate scientists are conforming to peer pressure