TODAY at 5pm: Future of Energy with Jeff Bingaman – at the Harvard Law School 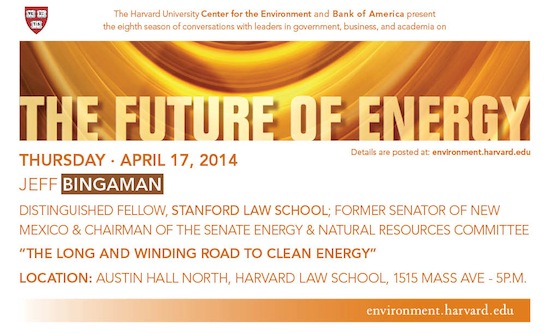 “The Long and Winding Road to Clean Energy” 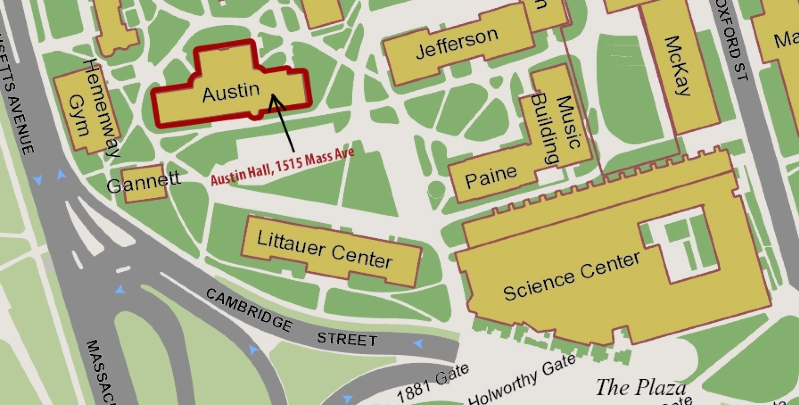 Jeff Bingaman served in the U.S. Senate from 1982 to 2013 and was chairman of the Senate Energy and Natural resources Committee from 2001-2002, and again from 2007 until the end of his term in the 112th Congress. In the 109th Congress, Bingaman played a major role in the passage of the Energy Policy Act of 2005, the first comprehensive energy bill to become law in 13 years. He was the lead sponsor of the Energy Independence and Security Act of 2007, which required a historic increase in vehicle fuel economy, boosted homegrown biofuels, and mandated the most sweeping energy efficiency legislation ever to be put into law. Bingaman served on the Senate Finance Committee and chaired the Subcommittee on Energy, Natural Resources and Infrastructure. He was also a member of the Senate Health, Education, Labor and Pensions Committee and a senior member of the Joint Economic Committee. Before being elected to the Senate, Bingaman was elected New Mexico attorney general. The former New Mexico Senator has an undergraduate degree from Harvard University and law degree from Stanford (JD ’68).

Backers of the new Open Source Seed Initiative will pass out 29 new varieties of 14 different crops, including broccoli, carrots and kale, on Thursday.

A group of scientists and food activists is launching a Thursday to change the rules that govern seeds. They’re releasing 29 new varieties of crops under a new “open source pledge” that’s intended to safeguard the ability of farmers, gardeners and plant breeders to share those seeds freely.

It’s inspired by the example of open source software, which is freely available for anyone to use but cannot legally be converted into anyone’s proprietary product.

At an event on the campus of the University of Wisconsin, Madison, backers of the new Open Source Seed Initiative will pass out 29 new varieties of 14 different crops, including carrots, kale, broccoli and quinoa. Anyone receiving the seeds must pledge not to restrict their use by means of patents, licenses or any other kind of intellectual property. In fact, any future plant that’s derived from these open source seeds also has to remain freely available as well.

, a vegetable breeder at the University of Wisconsin, Madison, helped organize the campaign. It’s an attempt to restore the practice of open sharing that was the rule among plant breeders when he entered the profession more than 20 years ago.

“If other breeders asked for our materials, we would send them a packet of seed, and they would do the same for us,” he says. “That was a wonderful way to work, and that way of working is no longer with us.”

These days, seeds are intellectual property. Some are patented as inventions. You need permission from the patent holder to use them, and you’re not supposed to harvest seeds for replanting the next year.

Judith Mwikali Musau has successfully introduced the use of grafted plants for crop and fruit harvesting. IFAD says it is clear that a new revolution in agriculture is needed to transform the sector. Credit:Isaiah Esipisu/IPS

ROME, Apr 16 2014 (IPS) – The Millennium Development Goals deadline of 2015 is fast approaching, but according to the International Fund for Agricultural Development (IFAD), poverty still afflicts one in seven people — and one in eight still goes to bed hungry.

Together with the United Nations Food and Agriculture Organisation (FAO) and the World Food Programme (WFP), IFAD unveiled the results of their joint work Apr. 3 to develop five targets to be incorporated in the post-2015 development agenda.

“We have a growing global population and a deteriorating natural resource base.” — Kanayo F. Nwanze, president of IFAD

These targets include access to adequate food all year round for all people; ending malnutrition in all its forms with special attention to stunting; making all food production systems more productive, sustainable, resilient and efficient; securing access for all small food producers, especially women, to inputs, knowledge and resources to increase their productivity; and more efficient post-production food systems that reduce the global rate of food loss and waste by 50 percent.

IPS correspondent Silvia Giannelli interviewed Kanayo F. Nwanze, president of IFAD, on the role of rural poverty and food security in shaping the current debate on the definition of a new development agenda.

We are excited to announce the launch of a new fellowship program focused on climate change, education, and community engagement.

The 2014 Community Climate Change Fellowship Program is a pilot initiative sponsored by EECapacity, with generous support from EPA. It is open to educators who want to address climate change issues in their communities through innovative education and engagement strategies. The fellowship will promote leadership, networking, innovation, as well as creative strategies for reaching new and under-represented audiences. Fellows will meet their colleagues at a five-day professional development workshop, take part in special webinars, and attend the 2014 NAAEE International Conference in Ottawa, Canada. Learning opportunities during the fellowship will focus on leadership, fundraising, evaluation, climate change, community engagement, and more.