Member governments of the IPCC convene in Berlin, Germany, from 7-12 April to approve the Summary for Policymakers of the Working Group III (WGIII) contribution to the Fifth Assessment Report (AR5) and to accept the underlying scientific and technical assessment.

The WGIII AR5 Summary for Policymakers will be available at mitigation2014.org on 13 April 2014.

Information for media, including press releases and media advisories, about the IPCC’s Fifth Assessment Report (AR5) can be found on this page

An upcoming UN report suggests that unproven technologies to suck carbon out of the air might be a fix for climate change, according to a leaked draft obtained by the Guardian.

Scientists and government officials gather in Berlin this week ahead of Sunday’s publication of the Intergovernmental Panel on Climate Change’s third part of its series of blockbuster climate change reports, which deals with policies addressing the emissions that drive global warming.

But environmentalists criticised the report’s inclusion of a controversial new technique that would involve burning biomass – trees, plant waste, or woodchips – to generate electricity, and then capturing the released carbon, pumping it into geological reservoirs underground.

Proponents of the technique – known as bio-energy with carbon capture and storage (BECCS) – suggest that regrown trees and crops might sequester additional carbon, making the technology “negative emission” because it might reduce the overall amount of carbon dioxide in the atmosphere.

It is part of broader group of geoengineering technologies to suck carbon dioxide out of the air – most of them experimental – that the IPCC is now forecasting may require “large-scale deployment” to keep global warming below rises of 2C.

But critics have warned that “negative emissions” claims about the technology aren’t well-founded, since associated industrial agriculture and forestry activities cause heavy emissions and regrown tree plantations do not act as carbon sinks. They further warn that large-scale conversion of land for the technology could threaten the livelihoods of millions of people in developing countries in the same way that the drive for biofuels has been linked to land grabs and food price rises.

“The technology is the dangerous spawn of two very bad ideas: it brings together the false premises and injustices of the bio-energy debacle with the risky, costly and unproven notion that we can bury carbon dioxide out of sight. That hardly seems a hopeful formula for calming the climate crisis. Such techno-fix fantasies will be welcomed by oil companies because they distract attention from the obvious solution of cutting fossil fuel use,” said Almuth Ernsting, co-director of bio-energy watchdog Biofuelwatch. 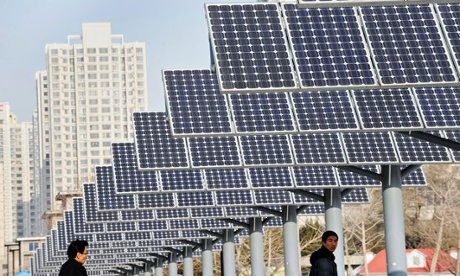 Catastrophic climate change can be averted without sacrificing living standards according to a UN report, which concludes that the transformation required to a world of clean energy is eminently affordable.
“It doesn’t cost the world to save the planet,” said economist Professor Ottmar Edenhofer, who led the Intergovernmental Panel on Climate Change (IPCC) team.

The cheapest and least risky route to dealing with global warming is to abandon all dirty fossil fuels in coming decades, the report found. Gas – including that from the global fracking boom – could be important during the transition, Edenhofer said, but only if it replaced coal burning.

The authoritative report, produced by 1,250 international experts and approved by 194 governments, dismisses fears that slashing carbon emissions would wreck the world economy. It is the final part of a trilogy that has already shown that climate change is “unequivocally” caused by humans and that, unchecked, it poses a grave threat to people and could lead to wars and mass migration.

The global price of coffee beans has risen by more than 50 percent.One of the main reasons for the increase is drought in Brazil.Three years ago, prices doubled in one season and this year looks like it will follow a similar trend.Indonesia stands to benefit from both increased prices and good harvests.In Aceh, 50,000 family farms depend on coffee crops.Al Jazeera’s Nicole Johnston reports from Takengon, Indonesia.