Percent of Americans Who Believe the Effects of Global Warming Have Already Begun to Happen, by Political Ideology, from McCright and Dunlap

The good news is the video of episode one of Showtime’s climate series, “Years Of Living Dangerously,” has been getting great reviews in the New York Times and elsewhere.

The bad news is the Times has published an error-riddled hit-job op-ed on the series that is filled with myths at odds with both the climate science and social science literature. For instance, the piece repeats the tired and baseless claim that Al Gore’s 2006 movie “An Inconvenient Truth” polarized the climate debate, when the peer-reviewed data says the polarization really jumped in 2009 (see chart above from “The Sociological Quarterly”).

As I said, “Years Of Living Dangerously” — the landmark 9-part Showtime docu-series produced by the legendary James Cameron, Arnold Schwarzenegger, and Jerry Weintraub — has been getting great reviews. Andy Revkin, often a critic of climate messaging, wrote in the NY Times Monday:

… a compellingly fresh approach to showing the importance of climate hazards to human affairs, the role of greenhouse gases in raising the odds of some costly and dangerous outcomes and — perhaps most important — revealing the roots of the polarizing divisions in society over this issue….

George Marshall, “an expert on climate and communication,” — who is also often a critic of climate messaging — wrote me:

What impressed me about the two episodes I watched was the respect that it showed to conservatives, evangelicals and ordinary working people…. it is still the best documentary I have seen.

The New York Times op-ed is from the founders of the Breakthrough Institute — the same group where political scientist Roger Pielke, Jr. is a Senior Fellow. It pushes the same argument that Pielke made in his fivethirtyeight piece — which was so widely criticized and debunked that Nate Silver himself admitted its myriad flaws and ran a debunking piece by an MIT climate scientist.

Ted Nordhaus and Michael Shellenberger, two widely debunked eco-critics who run The Breakthrough Institute (TBI), begin by asserting “IF you were looking for ways to increase public skepticism about global warming, you could hardly do better than the forthcoming nine-part series on climate change and natural disasters, starting this Sunday on Showtime.” But they never cite anything other than the trailer in making their case, dismissing the entire enterprise on the basis of 2 minutes of clips!

“But claims linking the latest blizzard, drought or hurricane to global warming simply can’t be supported by the science.”

I asked one of the country’s top climatologist, Michael Mann, to respond to that, and he replied:

The statement is disingenuous, very carefully worded to imply doubt where there is none. The term “the latest” is used as a sleight of hand. Of course, we don’t attribute individual meteorological events to climate change in a purely causal manner, because the link is statistical. It is like the link between cigarette smoking and lung cancer, or the link between a baseball player taking steroids and the number of home runs he hits in the season. We don’t talk about any one home run being caused by the steroids. Its the wrong question, the wrong framing. We know that statistically, the player hit more home runs because of the steroids. And, analogously, we know that we’re seeing more severe and prolonged heat waves and drought, extreme flooding, and more devastating hurricanes, because of human-caused climate change. Just the opposite of what the authors appear to want you to think.

We need good faith discussions of climate risks in leading media outlets like the New York Times. To quote Winston Churchill, we’re living in an age of consequences. There is no room for misleading screeds which seem intended at distracting and confusing the public about human-caused climate change at a time when it poses a critical threat to our planet.

In fact, the show isn’t about “the latest blizzard, drought or hurricane.” It does show the impact of some specific record-breaking extreme weather events that have been documented in the scientific literature to have been worsened by climate change (as I discuss here).

These include the Hurricane Sandy storm surge, the record Texas drought and heat wave of 2011, and the drying out of the Mediterranean, particularly Syria. 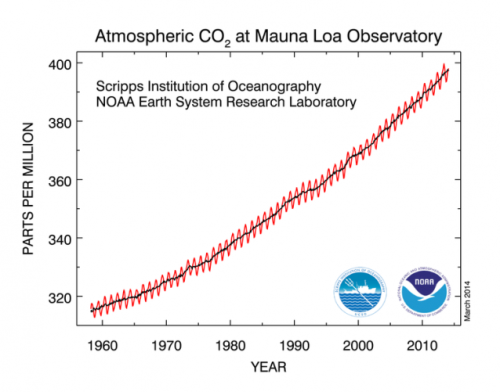 The concentration of carbon dioxide, the greenhouse gas that drives climate change, hit 402 parts per million this week — the highest level recorded in at least 800,000 years.

The recordings came from the National Oceanic and Atmospheric Association’s Mauna Loa Observatory in Hawaii, which marked another ominous milestone last May when the 400 ppm threshold was crossed for the first time in recorded history.

Carbon dioxide (CO2) levels spike every spring but this year the threshold was crossed in March, two months earlier than last year. In fact, it’s happening “at faster rates virtually every decade,” according to James Butler, Director of NOAA’s Global Monitoring Division, a trend that “is consistent with rising fossil fuel emissions.”

400 ppm was long considered a very serious measurement but it isn’t the end — it’s just a marker on the road to ever-increasing carbon pollution levels, Butler explained in an interview on NOAA’s website. “It is a milestone, marking the fact that humans have caused carbon dioxide concentrations to rise 120 ppm since pre-industrial times, with over 90 percent of that in the past century alone. We don’t know where the tipping points are.”

When asked if the 400 ppm will be reached even earlier next year, Butler responded simply, “Yes. Every year going forward for a long time.”

While atmospheric CO2 levels never approached 400 ppm in the 800,000 years of detailed records scientists have, there is evidence that the last time the Earth experienced such high concentrations was actually several million years ago. Writing about the 400 ppm recording last year, climatologist Peter Gleick pointed to UCLA research “that suggested we would have to go back at least 15 million years to find carbon dioxide levels approaching today’s levels” and another article in the journal Paleoceanography “on paleoclimatic records that suggest CO2 concentrations (at least in the Northern Hemisphere) may have been around 400 ppm between 2 and 4.6 million years ago.”

Archbishop Desmond Tutu has called for an anti-apartheid-style boycott and disinvestment campaign against the fossil fuel industry for driving global warming, just days ahead of a landmark UN report on how carbon emissions can be slashed.

In an article for the Guardian, the archbishop writes: “We live in a world dominated by greed. We have allowed the interests of capital to outweigh the interests of human beings and our Earth. It is clear [the companies] are not simply going to give up; they stand to make too much money.”

Tutu, one of the most revered figures of South Africa’s anti-apartheid struggle and a key backer of the economic and moral campaigns that helped end the system, says: “People of conscience need to break their ties with corporations financing the injustice of climate change. We can, for instance, boycott events, sports teams and media programming sponsored by fossil-fuel energy companies.”

Hollywood celebrities and respected journalists span the globe to explore the issues of climate change and cover intimate stories of human triumph and tragedy. Watch new episodes Sundays at 10PM ET/PT, only on SHOWTIME.

Subscribe to the Years of Living Dangerously channel for more: http://s.sho.com/YearsYouTube

After watching the first episode of YEARS OF LIVING DANGEROUSLY at house parties across the nation, join us on Sunday evening (4/13), 8:30 PM EDT / 5:30 PM PDT, for a 45-minute Google Hangout on Air with a message from James Cameron, actor Ian Somerhalder, MSNBC’s Chris Hayes and the producers of the 9-part Showtime series on climate change. LIVE HANGOUT. Connect through Google+ Hangouts or YouTube Live. Attend or host a house party – http://350.org/years/ and then join us for this national event.

What is a Climate Justice Narrative? Prof. Ravi Kanbur

Prof. Ravi Kanbur, TH Lee Professor of World Affairs, International Professor of Applied Economics and Management, Professor of Economics, Cornell University. Member of the High Level Advisory Committee (HLAC) to the Climate Justice Dialogue. This was recorded during the latest meeting of the HLAC in London in March 2014.

What is a Climate Justice Narrative? Ms. Patricia Espinosa-Cantellano

Ms. Patricia Espinosa-Cantellano, Ambassador of Mexico to Germany. Member of the High Level Advisory Committee (HLAC) to the Climate Justice Dialogue. This was recorded during the latest meeting of the HLAC in London in March 2014.

What is a Climate Justice Narrative? Mr. Caio Koch-Weser

Mr Caio Koch-Weser, Vice Chairman, Deutsche Bank Group, Chairman of the Board, European Climate Foundation. Member of the High Level Advisory Committee (HLAC) to the Climate Justice Dialogue. This was recorded during the latest meeting of the HLAC in London in March 2014.