Be Worried: Climate Scientists Under Attack 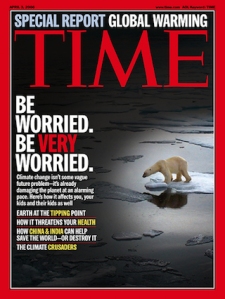 Climate scientists are under attack like never before for telling the truth about about the growing dangers posed by unrestricted carbon pollution.

Anyone who wishes can help climate scientists in their quest to provide humanity the information we need to save ourselves by supporting the Climate Science Legal Defense Fund (CSLDF). To find out how, go here.

Eight years ago this week, Time magazine launched the bluntest cover story on climate change ever published by a major news outlet. Like the best science journalism, it was based on interviews with many of the world’s leading climate scientists. The article’s online sub-hed was especially blunt:

Polar Ice Caps Are Melting Faster Than Ever… More And More Land Is Being Devastated By Drought… Rising Waters Are Drowning Low-Lying Communities… The climate is crashing, and global warming is to blame. Why the crisis hit so soon–and what we can do about it.

For a time it seemed as if the public and policymakers were actually listening, as awareness of the climate crisis grew and leading politicians from both parties called for action. Then came the the vicious backlash — the most successful disinformation campaign in history, funded by fossil fuel companies and making use of tactics developed by the tobacco industry. Scientists were vilified and cyber-bullied.

Scientists are far more worried than they were in 2006 — since emissions have soared, and the overwhelming majority of recent studies show the reality of climate change is far worse than what we suspected a decade ago — see this review of over 60 studies. See also the uncharacteristically blunt 2014 report from the American Association for the Advancement of Science, as well as the 2013 report from the U.N. Intergovernmental Panel on Climate Change. The IPCC’s next report, due out this weekend, appears no less alarming.

And because the stakes are higher, the intimidation and cyber-bullying of climate scientists continues unabated. Doing something about it is easy, though.

Climate Progress readers have been among the biggest supports of the important work of the Climate Science Legal Defense Fund (CSLDF). Prof. Scott Mandia explains what supporters have helped accomplish so far:

But this has all been done by Mandia and Joshua Wolfe “from their kitchens.” They both have “full-time jobs and families with small children and neither receives compensation for their time.”

So now they would like readers’ support to “go professional” to “hire a full-time Executive Director who will manage the day-to-day operations of providing legal help to our experts as well as increasing fundraising efforts. Having the full-time professional helps to assure that CSLDF will be there for our scientists years down the road. After all, climate change is not going anywhere and the sad fact is that neither will the legal attacks on our scientists.”

Scientists are the thin blue line helping protect us from a world ruled by superstition and “might makes right.” If anyone wants to know how they can help climate scientists, they can go here.