A Peabody press release announcing the campaign, called Advanced Energy for Life, argues that lack of access to energy is “the world’s number one human and environmental crisis.”

To enter the campaign website, readers encounter a drop-in screen that asks them to agree or disagree with the statement, “Access to low-cost energy improves our lives.” The site notes that there are 3.5 billion people in the world “without adequate energy” — 1.2 billion of them children. A video titled “Energy Poverty” features babies and small children, with text that implores, “We can solve this crisis.” It adds: “Affordable energy leads to better health.”

Peabody’s proposal to solve this crisis? Asking the U.S. Environmental Protection Agency to stop setting pollution limits on coal-fired power plants. Those pollution rules are meant to address climate change caused by greenhouse-gas emissions, a global problem that has the greatest effect on poor countries. Burning coal generates carbon emissions as well as hazardous pollutants such as mercury, lead, and benzene, according to the American Lung Association.

Burson-Marsteller, the world’s largest PR firm, and its subsidiary, Proof Integrated Communications, are working behind the scenes on Peabody’s PR effort. Burson-Marsteller spokesman Paul Cordasco confirmed to The Huffington Post that the company is working on behalf of Peabody. Peabody spokeswoman Beth Sutton said “Burson-Marsteller and several other firms are providing support for the campaign.”

Sutton said the campaign “will be sustained long term” and “is aimed at changing the global conversation to focus on energy poverty.” 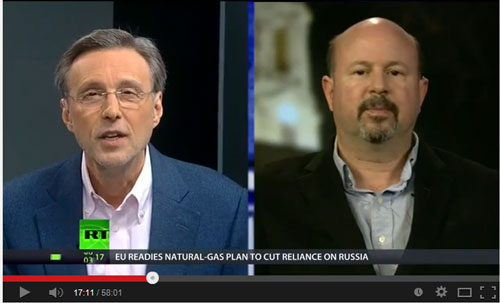 Right now – America’s food supplies are controlled by a handful of giant transnational corporations. That needs to change – and change now & I’ll tell you why.

Right now – America’s food supplies are controlled by a handful of giant transnational corporations. That needs to change – and change now & I’ll tell you why.

Greg Palast, Truthdig / Vulture’s Picnic / Vultures and Vote Rustlers, joins Thom Hartmann. This week marks the 25th anniversary of the devestating Exxon Valdez oil spill disaster. But while Exxon had its name slapped on the ship – could another company have really been behind the environmental disaster?

3 Mile Island…35 years later – When will we ever learn?

Kevin Kamps, Beyond Nuclear, joins Thom Hartmann. This Friday marks the 35th anniversary of the Three Mile Island nuclear disaster. More than three decades later – how safe are our nuclear power plants and how much closer are we to a nuclear-free world?

On tonight’s show a double Conversations with Great Minds. Thom talks with Dr. Michael Dorsey about climate change and if President Obama has lived up to campaign promises on climate policy, plus what needs to happen to address the issue. Thom also spoke with Billy Parish about the role younger Americans are playing in the struggle to prevent climate change.

Be Worried: Climate Scientists Under Attack

Climate scientists are under attack like never before for telling the truth about about the growing dangers posed by unrestricted carbon pollution.

Anyone who wishes can help climate scientists in their quest to provide humanity the information we need to save ourselves by supporting the Climate Science Legal Defense Fund (CSLDF). To find out how, go here.

Eight years ago this week, Time magazine launched the bluntest cover story on climate change ever published by a major news outlet. Like the best science journalism, it was based on interviews with many of the world’s leading climate scientists. The article’s online sub-hed was especially blunt:

Polar Ice Caps Are Melting Faster Than Ever… More And More Land Is Being Devastated By Drought… Rising Waters Are Drowning Low-Lying Communities… The climate is crashing, and global warming is to blame. Why the crisis hit so soon–and what we can do about it.

For a time it seemed as if the public and policymakers were actually listening, as awareness of the climate crisis grew and leading politicians from both parties called for action. Then came the the vicious backlash — the most successful disinformation campaign in history, funded by fossil fuel companies and making use of tactics developed by the tobacco industry. Scientists were vilified and cyber-bullied.

Scientists are far more worried than they were in 2006 — since emissions have soared, and the overwhelming majority of recent studies show the reality of climate change is far worse than what we suspected a decade ago — see this review of over 60 studies. See also the uncharacteristically blunt 2014 report from the American Association for the Advancement of Science, as well as the 2013 report from the U.N. Intergovernmental Panel on Climate Change. The IPCC’s next report, due out this weekend, appears no less alarming.

And because the stakes are higher, the intimidation and cyber-bullying of climate scientists continues unabated. Doing something about it is easy, though.

Climate Progress readers have been among the biggest supports of the important work of the Climate Science Legal Defense Fund (CSLDF). Prof. Scott Mandia explains what supporters have helped accomplish so far:

But this has all been done by Mandia and Joshua Wolfe “from their kitchens.” They both have “full-time jobs and families with small children and neither receives compensation for their time.”

So now they would like readers’ support to “go professional” to “hire a full-time Executive Director who will manage the day-to-day operations of providing legal help to our experts as well as increasing fundraising efforts. Having the full-time professional helps to assure that CSLDF will be there for our scientists years down the road. After all, climate change is not going anywhere and the sad fact is that neither will the legal attacks on our scientists.”

Scientists are the thin blue line helping protect us from a world ruled by superstition and “might makes right.” If anyone wants to know how they can help climate scientists, they can go here.

UN scientists are set to deliver their darkest report yet on the impacts of climate change, pointing to a future stalked by floods, drought, conflict and economic damage if carbon emissions go untamed.

A draft of their report, seen by the news organisation AFP, is part of a massive overview by the Intergovernmental Panel on Climate Change, likely to shape policies and climate talks for years to come.

Scientists and government representatives will meet in Yokohama, Japan, from tomorrow to hammer out a 29-page summary. It will be unveiled with the full report on March 31.

“We have a lot clearer picture of impacts and their consequences … including the implications for security,” said Chris Field of the US’s Carnegie Institution, who headed the probe.

The work comes six months after the first volume in the long-awaited Fifth Assessment Report declared scientists were more certain than ever that humans caused global warming.

It predicted global temperatures would rise 0.3C-4.8C this century, adding to roughly 0.7C since the Industrial Revolution. Seas will creep up by 26cm-82cm by 2100. The draft warns costs will spiral with each additional degree, although it is hard to forecast by how much.

Warming of 2.5C over pre-industrial times — 0.5C more than the UN’s target — may cost 0.2-2.0 per cent of global annual income, a figure that could amount to hundreds of billions of dollars each year. “The assessments that we can do at the moment probably still underestimate the actual impacts of future climate change,” said Jacob Schewe of the Potsdam Institute for Climate Impact Research in Germany, who was not involved in the IPCC drafting.

Many scientists concurred, he said, that recent heatwaves and floods were evidence of climate change already on the march — and a harbinger of a future in which once-freakish weather events become much less rare.

Among the perils in the draft: Rising greenhouse-gas emissions will “significantly” boost the risk of floods, with Europe and Asia particularly exposed. In the highest warming scenarios of untamed greenhouse gas emissions, three times as many people will be exposed to severe river flooding as with lower warming.

For every 1C rise in temperature, another 7 per cent of the world’s population will see renewable water resources decline by a fifth.