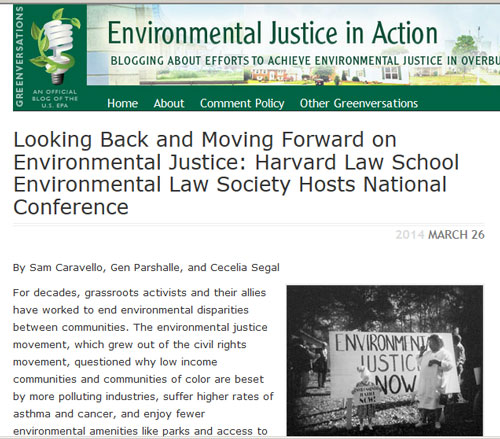 For decades, grassroots activists and their allies have worked to end environmental disparities between communities. The environmental justice movement, which grew out of the civil rights movement, questioned why low income communities and communities of color are beset by more polluting industries, suffer higher rates of asthma and cancer, and enjoy fewer environmental amenities like parks and access to nutritious food.

Twenty years ago, government began to respond. In 1994, President Clinton issued Executive Order 12898, which made Environmental Justice a national priority and gave activists hope that politically underrepresented communities overburdened by environmental harms would soon have a voice and vehicle for bringing about justice. State governments began responding, too. In 1994, only four states addressed environmental justice by law or executive order. Today, all 50 states and the District of Columbia have some form of environmental justice law, executive order, or policy, demonstrating recognition of environmental justice as a critical issue deserving government attention. For more details see EJ Milestones and Accomplishments: 1964-2014, a report by the Barbara Jordan-Mickey Leland School of Public Affairs at Texas Southern University.

The Challenges of Climate Change Communication

Yale Forum regular contributor Bruce Lieberman hosts a
discussion on the unique and demanding challenges that communicators must overcome when addressing climate change issues. What exactly is it about climate change that makes it what communicators call a “wicked” issue? Are climate scientists the solution … or themselves part of the problem? And who, exactly, is best positioned to address which diverse audience segment?

BRUCE LIEBERMAN (moderator) is a freelance science writer based in Southern California near San Diego. He has written about climate change for more than a decade.

RICHARD ALLEY, Ph.D., a professor in Penn State University’s Department of Geosciences, is a Member of the National Academy of Sciences and the author of award-winning books such as The Two-Mile Time Machine and Earth: The Operators’ Manual, the latter of which is also a PBS documentary. Widely recognized as an outstanding science communicator, Alley is a member of the United Nations’ IPCC.

SUSANNE MOSER, Ph.D., directs her own independent research and consulting firm in Santa Cruz, California. A frequent speaker and author on science communication issues, Moser is a Social Science Research Fellow at the Woods Institute for the Environment at Stanford University and a Research Associate at the University of California-Santa Cruz, Institute for Marine Sciences. She has previously worked at the National Center for Atmospheric Research and with the Union of Concerned Scientists.

2014: The Year Ahead in Climate Change News

BRUCE LIEBERMAN is a freelance science writer based in Southern California near San Diego. He has written about climate change for more than a decade. Twitter: @brucelieberman1 E-mail: bruce.

LISA PALMER is a freelance journalist based in Maryland. She reports on climate change, the environment, energy, and sustainable business. Twitter: @Lisa_Palmer E-mail: lisa.

JOHN WIHBEY is an editor and researcher at the Harvard Kennedy School’s Shorenstein Center. He manages the JournalistsResource.org project. Twitter: @wihbey E-mail: john.

scientists are set to deliver their darkest report yet on the impacts of climate change, pointing to a future stalked by floods, drought, conflict and economic damage if carbon emissions go untamed.

A draft of their report, seen by the news organisation AFP, is part of a massive overview by the Intergovernmental Panel on Climate Change, likely to shape policies and climate talks for years to come.

Recent extreme weather in the UK, US and Asia is consistent with climate change, Rajendra Pachauri, the chair of the Intergovernmental Panel on Climate Change, tells John Vidal. He says such events will become more frequent unless carbon emissions can be brought under control. He is optimistic that mankind can achieve this feat — but time is running out http://www.theguardian.com/environmen…

and As IPCC Warns of Climate Disaster, Will Scientific Consensus Spark Action on Global Warming?

The decision to prepare a Fifth Assessment Report (AR5) was taken by the members of the IPCC at its 28th Session (09-10 April 2008, Budapest, Hungary). Following the election of the new IPCC Bureau at the 29th Session of the IPCC (31 August – 04 September 2008, Geneva, Switzerland) and discussions about future IPCC activities at the 30th Session of the IPCC (21-23 April 2009, Antalya, Turkey), a Scoping Meeting was held (13-17 July 2009, Venice, Italy) to develop the scope and outline of the AR5. The resulting outlines for the three Working Group contributions to the AR5 were approved by the 31st Session of the IPCC in Bali (26-29 October 2009)