A meta-analysis of crop yield under climate change and adaptation 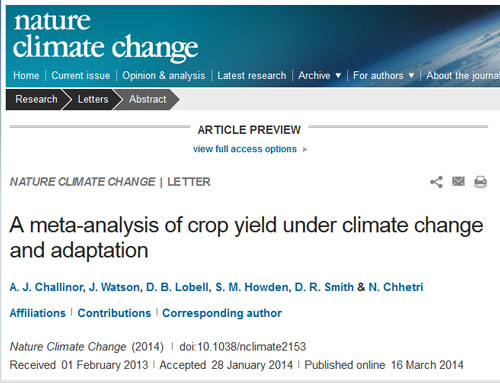 Feeding a growing global population in a changing climate presents a significant challenge to society1, 2. The projected yields of crops under a range of agricultural and climatic scenarios are needed to assess food security prospects. Previous meta-analyses3 have summarized climate change impacts and adaptive potential as a function of temperature, but have not examined uncertainty, the timing of impacts, or the quantitative effectiveness of adaptation. Here we develop a new data set of more than 1,700 published simulations to evaluate yield impacts of climate change and adaptation. Without adaptation, losses in aggregate production are expected for wheat, rice and maize in both temperate and tropical regions by 2 °C of local warming. Crop-level adaptations increase simulated yields by an average of 7–15%, with adaptations more effective for wheat and rice than maize. Yield losses are greater in magnitude for the second half of the century than for the first. Consensus on yield decreases in the second half of the century is stronger in tropical than temperate regions, yet even moderate warming may reduce temperate crop yields in many locations. Although less is known about interannual variability than mean yields, the available data indicate that increases in yield variability are likely.