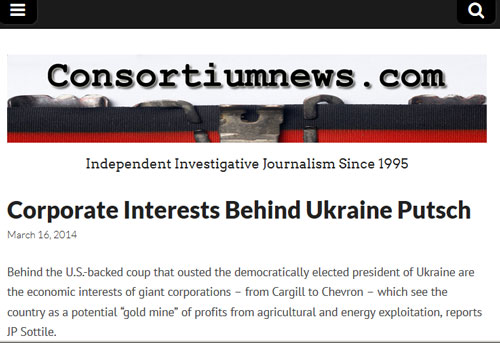 Behind the U.S.-backed coup that ousted the democratically elected president of Ukraine are the economic interests of giant corporations – from Cargill to Chevron – which see the country as a potential “gold mine” of profits from agricultural and energy exploitation, reports JP Sottile.

On Jan. 12, a reported 50,000 “pro-Western” Ukrainians descended upon Kiev’s Independence Square to protest against the government of President Viktor Yanukovych. Stoked in part by an attack on opposition leader Yuriy Lutsenko, the protest marked the beginning of the end of Yanukovych’s four year-long government.

A screen shot of U.S. Assistant Secretary of State for European Affairs Victoria Nuland speaking to U.S. and Ukrainian business leaders on Dec. 13, 2013, at an event sponsored by Chevron, with its logo to Nuland’s left..

Despite the turmoil within Ukrainian politics after Yanukovych rejected a major trade deal with the European Union just seven weeks earlier, Cargill was confident enough about the future to fork over $200 million to buy a stake in Ukraine’s UkrLandFarming. According to Financial Times, UkrLandFarming is the world’s eighth-largest land cultivator and second biggest egg producer. And those aren’t the only eggs in Cargill’s increasingly-ample basket.

On Dec. 13, Cargill announced the purchase of a stake in a Black Sea port. Cargill’s port at Novorossiysk — to the east of Russia’s strategically significant and historically important Crimean naval base — gives them a major entry-point to Russian markets and adds them to the list of Big Ag companies investing in ports around the Black Sea, both in Russia and Ukraine.