California is a major farming state, and a serious drought is hurting its farmers and raising the likelihood of higher food prices throughout the United States. VOA’s Mike O’Sullivan reports from California’s Central Valley, where water-starved farms are cutting production.

A disaster at the Fukushima Daiichi nuclear power plant on March 11, 2011, has greatly affected how Japanese citizens feel about that energy source. Polls suggest that 80 percent of voters now oppose nuclear power in Japan. But walking away from nuclear power is a tricky proposition for a country that has not invested much in renewable alternatives. Science correspondent Miles O’Brien reports.

A string of small earthquakes in Mahoning County, Ohio this week triggered the Ohio State Department of Natural Resources to order a halt on fracking operations near the tremor site. Hilcorp Energy, which is producing oil and natural gas out of the Utica Shale, is the only company with fracking operations near the epicenter. Although, the boom in oil and gas drilling central and southern U.S. has been tied to an increase in the number of earthquakes in the region, RT’s Perianne Boring reporters there is little evidence to show that hydraulic fracturing is actually the cause.

For the first time ever, our children are growing up less healthy than we are. As the rate of cancer, infertility and other illnesses linked to environmental factors climbs ever upward each year, we must ask ourselves – why is this happening? “Food Beware” begins with a visit to a small village in France, where the town’s mayor has decided to make the school lunch menu organic and locally grown. It then talks to a wide variety of people with differing perspectives to find common ground – children, parents, teachers, health care workers, farmers, elected officials, scientists, researchers and the victims of illnesses themselves. Revealed in these moving and often surprising conversations are the abuses of the food industry, the competing interests of agribusiness and public health, the challenges and rewards of safe food production, and the practical, sustainable solutions that we can all take part in. “Food Beware” is food for thought – and a blueprint for a growing revolution.

A national perspective on climate change

A surprisingly large group of Americans are worried enough about global warming to take action on the issue, said Anthony Leiserowitz, director of the Yale Project on Climate Change Communication, during a Harvard talk on March 6.

For more than a decade, Leiserowitz has been conducting polls to gauge the country’s attitude toward environmental issues. Some 20 million Americans, he said, responded late last year that they already had or definitely would join a campaign to persuade lawmakers to pass climate change laws. However, the movement lacks the organization of other activist efforts, he said.

Five percent of Americans are worried enough that they “definitely would” engage in nonviolent civil disobedience against corporations or government bodies that were making global warming worse, Leiserowitz added.

“Kind of stunning to me,” he said. “That 5 percent right there for all Americans, that’s about 13 million people that say they would do that. Wow.”

The findings are among a range of insights on Americans’ views toward climate change from a series of surveys conducted by the Yale University Project on Climate Change Communication and the George Mason University Center for Climate Change Communication. The most recent poll, which had a margin of error of plus or minus 3 points, questioned 830 Americans age 18 and older. It was conducted from Nov. 23 to Dec. 9. 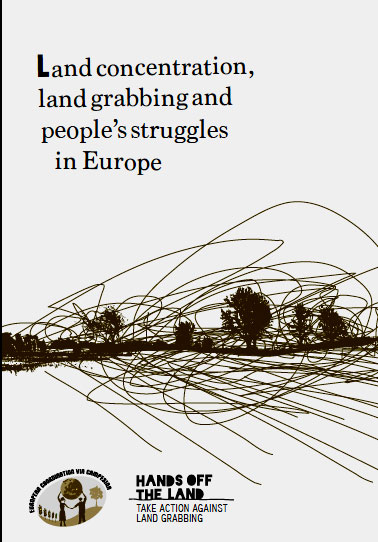 Introduction: The report and its highlights

Land issues are rarely considered to be a problem for Europeans, or cause for people’s struggles in Europe today, as it is elsewhere in the world – at least in the emerging literature on contemporary global land enclosures. But is this really the case? A closer look reveals quite the opposite. Many deeply social,
cultural, political and economic issues and concerns around land that are associated with countries and peoples in the global South exist all across the globe — including in a region where one might least expect it: Europe. In Europe today, concentration of land under ever larger holdings controlled by fewer hands, resulting (in part) from land grabbing and resulting in shrinking access to land for small-scale food producers, is accelerating. To what extent, how and why this is happening warrants far more critical attention than has been the case to date. This collection aims to address this gap and spark meaningful and constructive discussion. It brings together case studies detailing the nature and extent of these problems in 13 countries. The case studies are capped by a final chapter that reflects on the situations they present from a human rights perspective, using the lens of the CFS Tenure Guidelines on Land, Fisheries and Forests, a new governance instrument that was supported by European governments and addresses tenure issues in relation to national food security and the progressive realisation of the right to food.

The study itself is just an initial attempt in what we hope will become a continuing conversation around land issues in Europe in particular and in the global North more generally. The current study is the product of an intensive and focused collective process, one involving a team of grassroots researchers, academics, and development practitioners, many of whom were already steeped in practical experience and knowledge regarding the particular situations they researched and wrote about here. The seeds of inquiry were planted in June 2012 and began germinating that Autumn; the early growth was examined,
pruned and nurtured in a workshop that was held in Cluj-Napoca, Romania in December 2012; in January 2013 the first fruits were ready for taste-testing via a peer review process and layers of editorial work. The whole project was spearheaded by the European Coordination Via Campesina (ECVC), in close collaboration with the Hands Off the Land (HOtL) alliance and other organisations. The European Coordination Via Campesina is an organisation of 27 farmers’ and agricultural workers’ unions as well as rural movements working to achieve food sovereignty in Europe. The HOtL alliance brings together a number of organisations engaged in raising public awareness within Europe on pressing global land issues, including land grabbing, involving European policies and companies.

How Free Trade has Killed the US Economy

If you liked this clip of The Thom Hartmann Program, please do us a big favor and share it with your friends… and hit that “like” button!

Don Miley has worked at the Idaho National Laboratory for more than two decades. He gives tours of the Experimental Breeder Reactor I, the world’s first nuclear power plant, built in the Idaho desert in 1949 by a team of researchers.

In this talk, we explore the early 1950s unbridled enthusiasm for nuclear-powered trains, planes, cars and vacuum cleaners. From the romantic appeal of nuclear energy in the 1950s to the hyper criticism of it in the 1980s, nuclear power and its history have seemingly always been based on emotions rather than facts.

During that time he’s seen a shift in the perception of nuclear energy.

http://www.democracynow.org- The spat between the CIA and its Congressional overseers has intensified after Senator Dianne Feinstein took to the Senate floor to directly accuse the CIA of spying in an effort to undermine a probe of the agency’s torture and rendition program. The Senate Intelligence Committee’s report has yet to be released but reportedly documents extensive abuses and a cover-up by CIA officials. Feinstein says the CIA broke the law in secretly removing more than 900 documents from computers used by panel investigators. She also accused the CIA of intimidation in requesting an FBI inquiry of the panel’s conduct. CIA Director John Brennan has rejected Feinstein’s allegations. Meanwhile, former National Security Agency contractor Edward Snowden has weighed in by accusing Feinstein of hypocrisy for criticizing alleged CIA spying on U.S. senators while condoning government surveillance of private citizens. We host a roundtable discussion with three guests: former FBI agent Mike German, former CIA analyst Ray McGovern, and Pulitzer-winning journalist Julia Angwin, author of the new book, “Dragnet Nation: A Quest for Privacy, Security and Freedom in a World of Relentless Surveillance.”