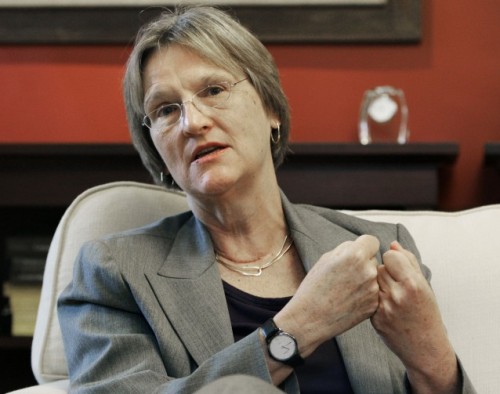 In this June 30, 2009 file photo, Harvard University President Drew Faust speaks during an interview with The Associated Press on the Harvard campus in Cambridge, Mass.

Climate Progress has obtained exclusive video of Harvard President Drew Faust offering a less-than-convincing defense of her decision not to divest the University of fossil fuel investments.

Back in October, Faust released a letter explaining why Harvard would not divest. Her reasoning was thoroughly debunked at the time.

A couple of days ago, Harvard divestment activist Alli Welton confronted Faust in Harvard Yard. Here is the video:

This is the Case – Raw from Divest Harvard on Vimeo.

What is especially telling is the exchange that begins at about 50 seconds:

Welton: “If Harvard doesn’t help us who do we have to turn to….”
Faust: “Harvard does help you. Harvard helps by making discoveries that enable this transition….”
Welton: “But the fossil fuel industry stands in the way of their implementation.”
Faust: “That is not the case.”

Does Faust seriously believe that? The problem with advancing a morally indefensible position is that your argument quickly becomes a house of cards.

The oil, gas, and coal industries have spent over $2 billion lobbying Congress since 1999. In 2009 alone, the oil and gas industry “unleashed a fury of lobbying expenditures” against climate legislation, “spending $175 million — easily an industry record — and outpacing the pro-environmental groups by nearly eight-fold, according to a Center for Responsive Politics analysis.”

Indeed, the fossil fuel industry is not content these days to merely block new legislation to advance clean energy. They are working in a numerous states to roll back existing clean energy standards.